Citigroup is currently holding their Citi Mobile Challenge for the EMEA. The program consists of four demo days starting with one in Nairobi last week, and Jerusalem, Warsaw and London events taking place this week. The Challenge draws financial technology firms which provide API resources to create mobile based products that could be deployed by the bank.

Winners of the competition receive cash awards, acceptance into accelerator programs, as well as possible commercial relationships with Citi. Finalists to that get to demo also benefit from exposure to numerous non-Citigroup attendants from the financial and venture capital world that participate in the judging.

Reviewing the mobile financial innovation, Finance Magnates attended yesterday’s Jerusalem demo day. Although occurring in Israel, the event was a global affair, with 20 groups demoing from the U.S., Switzerland, Poland and Russia.

For Citi, the event is also a roadshow which offers executives to witness global banking innovations.

For Citi, the event is also a roadshow for executives to witness global banking innovations, usage of their API and to increase their global exposure among startups. In regards to distributing their API to the finalists, this part of the competition could ultimately provide Citi the greatest benefits as they are able to witness main customer demands from various regions that startups are trying to solve.

On the different focuses of products, one of the interesting comments of the day was from David Chubak, Head of Productivity at Citigroup. Chubak stated that startups were solving different types of problems based on their region. He explained that in New York, where branch visits remain an important part of banking, innovation focused on creating better user experiences for customers in branches. However, in Nairobi, which has a large unbanked population, startups at the challenge were using Citi’s technology to create products to increase financial inclusion. In regards to Israel, Chubak noted the amount of mobile payment apps which revealed ‘digital first’ interest among banking customers instead of branches and physical cards. 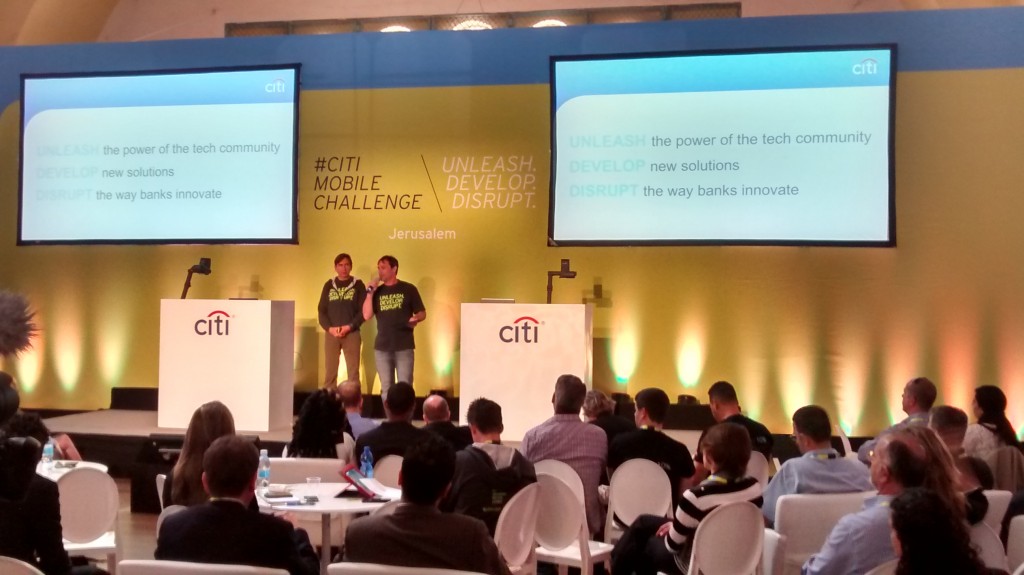 One of the day’s themes was mobile payments. As Chubak described Israel’s digital first focus, this was displayed during the demos, with most of the mobile payment products emanating from startups in the country. Products included Paybox, which created a WhatsApp version of payments, where users can create groups to communicate with other as well as initiate and settle payments. As an example, if five users split a dinner, using Paybox, they can all easily pay their share to the one user who charges the meal on their credit card, without the other four having to make the payments in cash. Speaking to the company’s founders, and answering why can’t WhatsApp themselves offer the same product, they explained to Finance Magnates that although any of the social networks like Facebook, WhatsApp, or Google could do what they are doing, it’s not their core business. For Paybox, the goal is to become the exclusive payment product of choice for all group purchases, and by focusing on that aim they believe they will be able to provide a superior platform for group payments.

That type of belief of providing improved services compared to existing offerings was also on display by HopOn, Billon, GetGems, and Bronco Pay. Using mobile as its foundation, the firms are aiming to enhance existing services such as public transportation, social networks, messaging and feature phones by adding layers of payment and banking services.

Another area of focus was the use of mobile technology as fraud prevention and identity verification. Two firms, OneVisage and ID Mission have created a mobile device technology for financial institutions to collect and verify facial identities and other biometric data. In terms of the future of the market, Ronni Guggenheim of OneVisage explained to Finance Magnates that he could see both eCommerce and point of sale terminals integrating facial verification into completing transactions. Also involved with fraud prevention was OffLa which is working on integrating user mobile information, such as their location, within big data calculations to reduce fraudulent payments.

Providing financial services for the non and under-banked was also demoed. Two products that offered solutions for small merchants were Sling and Vendedy. Similar but different, the two firms had separate types of products to meet the needs of merchants. Sling created a mobile based point of sale solution to accept credit card and PayPal payments, with merchant accounts being able to be opened in minutes instead of weeks. Vendeddy operates a digital based marketplace for street merchants in emerging markets using mobile technology.

Targeting financial inclusion, but towards consumers were Rewire and nFrnds. In Rewire’s case, they are creating services to simplify and decrease remittance fees, while nFrnds is enabling banking and payments services to users of feature phones.

One area where improved internet and smartphone adoption rates are beginning to see a lot of innovation is in advertising. In this niche, Batch and BzBuzz have created products that enable credit card firms and banks to provide their users with location based incentives. Examples could be a notification of a restaurant with a deal in their area, or for merchants to send a discount to mobile users who shop at a competitor.

Digital budgeting was also displayed at the event. Examples included NovoRich, Happy Savings and SmartBanking from Rubbles which are creating ‘Google Now’ types of services that analyze banking customer habits and send messages of how they can save money and meet savings goals. Using items such as real time notifications and gamification, the apps aim to improve how people both save and spend their money.

Overall, the event showed that despite its small screen limitations, mobile technology is becoming both an enabler and distributor of finance. Companies are able to user mobile technology to increase their engagement with users as well as lower barriers of entry for these services. Similarly, consumers and merchants are gaining efficient ways to send money, whether to pay digitally for a cup of coffee, or purchase products from a street vendor on the other side of the globe.