In the trading markets, technology is often seen as this double edged sword. On one hand it has connected buyers and seller from around the globe in astonishing speeds that pretty much trade any asset (virtual or real) at any time.

But, there is also the fear that as organized markets are controlled by technology, any glitches or hacks can create multi-billion dollar losses take place in seconds. Recent examples are the major flash crashes that bring trading to a halt, minor flash crashes that occur daily to individual products, the DAO Hack that destroyed for many the legitimacy of Ethereum and malware infections that are stealing customer data from brokers and banks.

To the list of worries, you can add untested technology. The latest example wasn’t an internal product, but an outside force that traders were relying on during Tuesday’s US market sessions as voting was taking place.

Prior to futures prices and the dollar falling in aftermarket venues following pro-Trump results, trading was decisively in the other direction during Tuesday’s session. Boosting the US equity market as well as boosting strength in the Mexican Peso were initial results from Votecastr that showed Hillary Clinton well on her way to an easy victory.

A data focused technology startup, Votecastr aimed at providing real-time estimates of voting results in Battleground States on Tuesday. Rather than polling people for who they voted for, Votecastr focused on demographic and race designations of voters. Through this information and by injecting expected voter trends from various groups of voters, Votecastr could reverse engineer who they voted for and what are the real-time results.

Teaming up with online news publications, Slate and Vice, Votecastr gained a massive audience to distribute their results to. For Slate and Vice, the data was a chance to provide an alternative to exit poll data that major news networks agree to keep confidential until individual state polls close.

With voting opening on Tuesday morning, Votecastr had two big questions surrounding its work. Firstly, on the operational side, could the technology hold up to the rigors of such a massive scale of information they were collecting? Secondly, is Votecastr’s calculation models reliable?

In relation to the second question, Nate Silver’s data based political and sports blog, FiveThirtyEight, was asked about Votecastr results. Harry Enten, Senior Political Writer at FiveThirtyEight referred to Votecastr as “untested”.

Despite the worries, traders were taking the Votecastr data as a positive signal towards a Clinton victory. According to the Wall Street Journal, the 140 point intraday jump in the Dow Jones yesterday was due in part to data published by Slate and Vice and correlated with the initial distribution of Votecastr data.

Technical glitches though did take place later which put into question whether the voting data calculations could be relied upon. The technical problems answered the above-mentioned first question of whether Votecastr technology was robust to handle the data flow. At the end, it wasn’t as much as processing the data, but faulty creation of voting maps and inclusion of 3rd party candidates that created confusion. Those glitches though appear to had taken some of the air from the initial market euphoria, with Dow Jones losing about half of its initial gains.

At the end of the day, the final Votecastr results showed that the technology still has a way to go before becoming a reliable source of predictive data. As seen below of seven states covered, Votecastr expected a Clinton win in all of them. However, actual results showed Trump claiming five of the seven, with a sixth, New Hampshire, currently too close to call but leaning towards Trump. 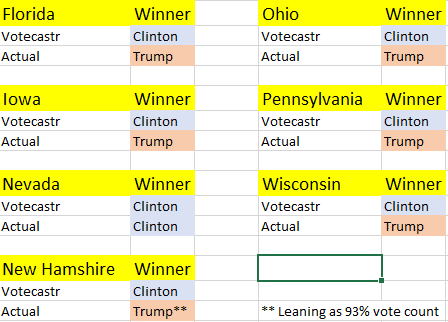 Returning back to Harry Enten of FiveThirtyEight’s, I believe a key point of this story was his description of Votecastr data as ‘untested’. As a former Wall Street trader, I can attest that traders are always looking for an edge in the market. For many, technology advances are that edge.

Specifically making sense of social and news data has become a hot commodity with firms such as Dataminr collecting large subscription revenues from hedge funds and traders for their news alerts based on Twitter information. Nonetheless, as learned yesterday, ignoring track records and relying on products untested by the market is often a losing recipe.

Contributed by Ron Finberg, who in addition to his work with technology and financial compliance reporting at Cappitech, has a major interest in how data is reshaping finance and online media.