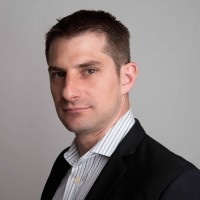 While Satoshi Nakamoto may have created bitcoins as the monetary system for the internet, it can be argued that it’s really in mobile where the digital currency shines. This is partially due to mobile internet and smartphones of 2009, when Nakamoto introduced bitcoins to the world being nothing like they are today. This has resulted in rapid change of consumer interests towards a mobile first mentality thanks to customized apps.

Despite the widespread use of mobile-based payments for fiat currencies, the introduction of Apple Pay has raised expectations of increased user adoption. Unlike previous offerings, Apple Pay launches with a large base of retail stores accepting the product as payment as well as with fingerprint identity to increase security. To learn more about the likelihood of Apple Pay driving the future of mobile payments, as well as, if and how it will affect bitcoin payments, DC Magnates connected with Gildera CEO, David Ripley, whose firm produces secure bitcoin wallets, for his take on the payments industry. The original interview was published on DC Magnates and can be read here.

1. How important do you believe is mobile (smartphone) for both traditional and bitcoin related payments?

For the traditional payments industry, mobile has yet to become important or prove that it will be important in the future. The legacy (non-digital currency) mobile payments companies still ride on top of the old payment rails (credit cards, debit cards, banks). They have not been able to provide a substantially different value proposition than these underlying systems. However, they do allow consumers the ability to leave their wallet full of credit cards at home. Some also have a marginally better security model, but only partly address the security challenge, meaning cards will not be going away completely anytime soon.

On the other hand, mobile very much plays a role with Bitcoin usage in bricks and mortar retail commerce. Users access Bitcoin wallets via mobile devices, undeniably tying the two together. Bitcoin wallets on mobile devices must continue to mature for Bitcoin to grow in the bricks and mortar world.
2. Following an initial creation of mobile-based bitcoin wallets like those from Blockchain.info and Mycellium, coming to market are integrated versions which are connected to user bank accounts such as from Coinbase and Circle. Will the emergence of the latter remove the need for standalone mobile bitcoin wallets?

Integrated solutions that provide the ability to convert back and forth between USD and BTC are in fact compelling for a significant segment of the user population. This is true today and likely will continue to be true going forward.

At the same time, many ‘bitcoin only’ wallets offer substantially superior benefits relative to the existing integrated solutions. For instance, all of the existing integrated solutions are custodial services, meaning they take ownership of their users’ bitcoin. In these instances, users do not have control over their bitcoin, they’re exposed to greater security risks, and they must rely on costly 3rd party audits just to ‘know’ that their funds exist.

On the other hand, there are many ‘bitcoin only’ wallets that do not take custody of customer funds and provide enhanced security. Further, many other ‘bitcoin only’ wallets offer interesting features and integrations (e.g. social media, map applications, etc.) that may appeal to specific segments of the population.

Share this article
Tags: bitcoin / payments
Got a news tip? Let Us Know