Larger banks, bound to strict government regulations on money laundering and customer verification, have mostly avoided putting their reputations at risk by getting involved with the cryptocurrency industry. As a result, smaller banks are quietly filling the gap and catering to the demands of the operators in this nascent ecosystem.

In the United States, as big institutions are shunning the virtual asset class, it appears only a few banks were willing to serve cryptocurrency companies. The list of institutions that are offering their customers premium crypto-focused banking solutions includes Metropolitan Bank, Silvergate Bank, Cross River Bank, and Signature Bank.

Indeed, the latest financial results published by those banks are refreshing for crypto enthusiasts among bankers, as these small lenders have generally been turning away their involvement with cryptocurrency companies into serious money-makers.

The pro cryptocurrency banks have doubled their profits, revenues and asset holdings, their recent filings with the SEC show, and they explicitly acknowledge that their upbeat performance is primarily due to cryptocurrency driven business.

In this article, we will take two SEC-reporting banks as examples of how landing cryptocurrency customers has propelled the small lenders to its best year ever.

Founded in 1999 and headquartered in New York, Metropolitan Bank is a community-focused bank that has recently added to its clients’ roster a handful of cryptocurrency exchanges. It has also lured hedge funds, family offices and other institutional investors that want to invest in crypto but can’t get their primary bank. 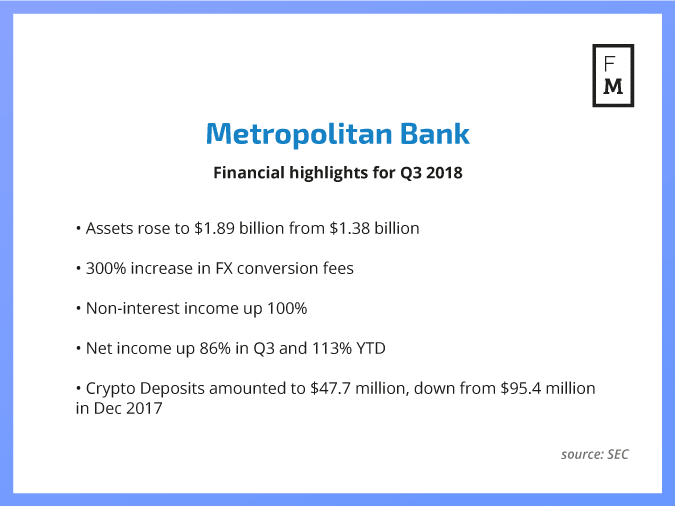 According to reports from the three-branch lender and the Securities and Exchange Commission, the crypto business is a proven lucrative niche for Metropolitan. What’s more, the last year’s performance was a staggering amount of growth when compared with that of the banking industry as a whole. For instance, while non-interest income for US banks rose a measly four percent in the first quarter, Metropolitan reported more than 300 percent increase from the previous year.

Before we delve into the details, we should note that Metropolitan and other pro crypto banks only handle fiat transactions for their exchange clients but don’t deal directly into crypto assets.

Let’s have a look at the business highlights which includes financial information dated to September 30, 2018:

Metropolitan’s solid financial metrics, particularly in the bottom-line section, could be mostly explained by the low cost of deposits which was driven almost entirely by the expansion of their crypto customers.

Silvergate Bank, located in San Diego, California is another prime example of how small lenders are showing signs of change in both attitude and business protocol, and how they became more welcoming of cryptocurrencies. 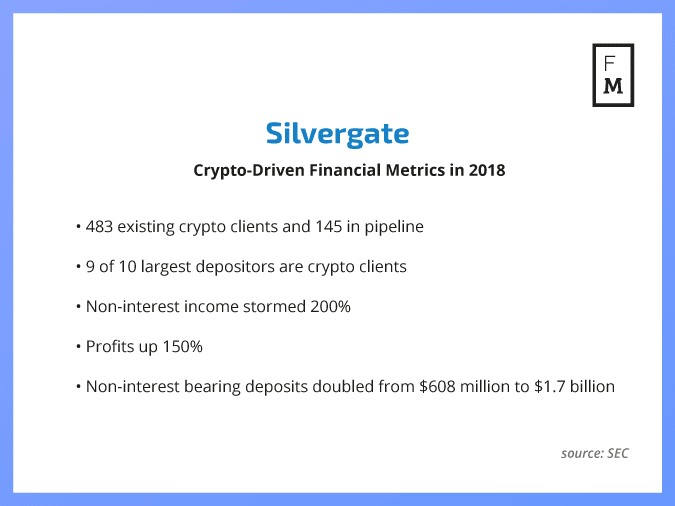 Due to the long-standing passion of its CEO, Silvergate is arguably the leading bank for crypto startups in the U.S. The local three-branch lender has opened up nearly 500 accounts for crypto-linked companies, including big US exchanges such as Coinbase, Paxos, bitFlyer, Gemini, and Kraken – a move that made its assets shot up last year from $978 million to $1.7 billion.

In addition, the latest filing with SEC shows substantial improvements in the following key operating metrics:

Silvergate, however, acknowledges that the unstable nature of crypto markets could adversely impact its business growth at any time. This may include a drop crypto clients’ deposits, onboarding new accounts or loss of existing customers.

Interestingly, Silvergate’s astronomical performance bucks the trend of the crypto bear market itself. For example, from December 2017 to September 2018, when the price of Bitcoin and other altcoins, as well the overall market cap, lost more than 70 percent of its value, Silvergate’s crypto clients increased their deposits by $273.7 million, up 21 percent year-over-year. The bank explains that the climb in crypto assets came primarily from new accounts, which deposited $831 million, partially offsetting decreases in deposit balances of existing customers.

Silvergate Bank is now pursuing an initial public offering on the New York Stock Exchange (NYSE) as it plans to raise $50 million.

Silvergate and Metropolitan are not the only banks taking the opportunity to capture a share in the emerging market of cryptocurrency-related businesses. Cross River Bank, in New Jersey, also provides services for more than 250 cryptocurrency companies, including some of the largest exchanges. This includes settlement and treasury management services for the cryptocurrency exchange Coinbase. Signature Bank is another community bank that powers some of the most well-known Fintech and cryptocurrency startups in the United States.

Furthermore, the trend of small banks backing digital currency firms isn’t only limited to the United States. Over the last couple of months, a handful of small lenders in Europe were also following suit, even going as far as offering a dedicated banking service for this sector in an attempt to resolve its financial inefficiencies. Thus, smaller lenders like Falcon and Vontobel in Switzerland as well as Fidor in Germany and Bank Frick in Liechtenstein have embraced the crypto market, offering a catalog of useful products and earning huge revenues.

The higher profits, coupled with banks executives’ rosy outlook, were welcome news for investors, who were watching the results closely amid a year of stock-market turbulence. In other words, with such considerable increases in assets and skyrocketing profits – now we have facts, not only speculation – other banks may not have the luxury of ignoring the crypto world anymore.