Continuing our weekly bitcoin basics column, this week we take a look at trading.  With prices flying higher and then falling in the beginning of 2013, only to rebound and top $1000 per bitcoin at the end of that year, it drove a whole class of speculators into the cryptocurrency market.  During 2014, prices have mostly been on a downtrend, but that hasn’t prevented bitcoins from having its share of huge price swings and opportunities this year.

In this article we take a look at the different methods you can trade bitcoins and other cryptocurrencies.

There are plenty of exchanges to buy bitcoins (read How to Buy Bitcoins) which provide investors the ability to profit on any long term price growth of the cryptocurrency.  But, if you want to trade them, just buying and holding isn’t probably what you are after and you’ll want to be able to short the market as well.

Here is where we want margin trading.  Using exchanges like BTC-e, Bitfinex, and FXOpen’s crypto offering, traders have the ability to buy bitcoins and other digital currencies using leverage. Depending on the exchange, leverage will typically max out at around 2.5:1, meaning for every $1000 in net balance, an account holder can buy $2500 in bitcoins.  The other advantage of exchanges offering margin, is that depending on quantities, they will also let you short the market if one believes prices of bitcoins will fall.

Traders used to stock trading, will see similar rules and guidelines with exchanges offering margin trading.  As such, when trading bitcoins on margin one can expect to also incur additional lending charges, as they are borrowing money to buy bitcoins with leverage.  In addition, if an account balance drops below minimum borrowing capital requirements, positions are automatically closed by the exchange.  An exchange may not mind lending its money to customers to buy bitcoins, but they don’t want to lose their extended cash.

Margin trading does come with its risk, as large swings in the market can cause traders to get wiped out quickly.

Another way to trade bitcoins is using a contract for difference (CFD).  A CFD is a synthetic product that tracks the prices of bitcoins.  But, don’t let the name and it being synthetic scare you off, CFDs are available for all types of assets such as commodities, stocks, and global indexes.  With bitcoin CFDs, they trade just like they do on an exchange, and traders will see a buy and sell price where of 24 hour liquidity to enter and exit positions.  CFDs of major assets are especially popular in Europe and the UK (although illegal in the US), and are offered by leading brokers and banks.  The biggest difference between CFDs and real assets is that buyers of CFDs don’t actually take position of the asset as it is a synthetic contract, but only profit or lose money based on the changes of price.

When it comes to bitcoin trading, CFDs offer the ability to trade bitcoins with leverage and to both go long and short.  At the moment, there are only a handful of brokers offering bitcoin CFDs compared to the thousands of online forex and CFD brokers in existence. However, the list does include quite a few regulated entities (see our Bitcoin Broker Table).

Among advantages of trading with brokers offering bitcoin CFDs is the availability of generous leverage, sometimes up to 25:1 and the above mentioned ability to trade long and short.  Traders can also take advantage of trading many of the other assets and products offered by the broker during quiet periods of bitcoin volatility. The disadvantage of CFDs is that brokers will typically offer them with wider spreads than what a real bitcoin costs on an exchange.  This is a comment trait among CFDs for all asset classes.

The ‘Wild West’of trading are binary options.  Another synthetic product, with binary options traders bet on the direction.  Unlike CFDs, profits are fixed and don’t depend on how much the price of bitcoin rises as falls. A trader simply enters whether they believe the price of bitcoins in the future will be higher or lower than the current price. When predicting correctly, traders win a fixed payout, usually between 70%-85%.  However, if the forecast is incorrect, the option expires worthless. (Like CFDs, several regulated binary brokers are available for trading with such as Anyoption and TopOption which appear on our broker table) 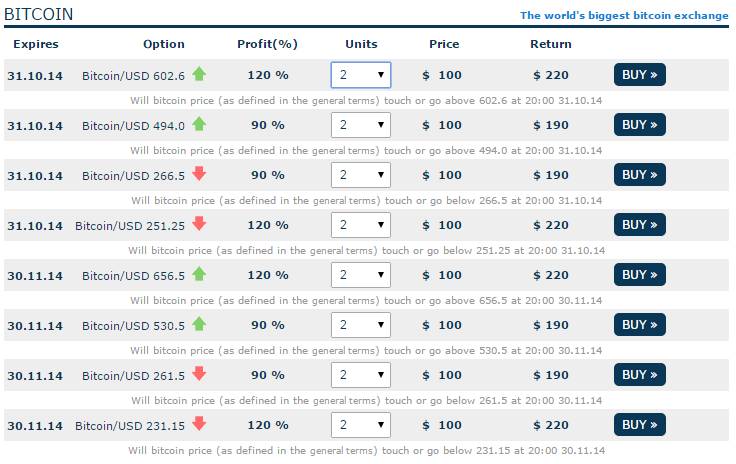 Coming soon several firms are working on new ways to integrate bitcoin liquidity to brokers around the world. Therefore, although these are three main ways to currently trade bitcoins, we are probably only scratching the surface of what will be available in the future.

Share this article
Tags: Anyoption / fxopen
Got a news tip? Let Us Know