If you’ve come anywhere near the Bitcoin space over the last few weeks, you’ve probably heard something about the upcoming halving.

Halvings–which, by the way, are events in which mining rewards are cut in half–have been programmed into Bitcoin’s protocol from the very beginning: in the Bitcoin whitepaper, Satoshi Nakamoto specified that a would take place every time 210,000 “blocks” of transaction data were added to the blockchain, which occurs roughly one time every four years.

Indeed, “the impact of the halving takes a long time to filter through to BTC’s price,” explained Jose Llisterri, co-founder of cryptocurrency derivatives exchange Interdax, in an email to Finance Magnates.

According to Llisterri, the reduction in the production of new Bitcoins contributes to scarcity as Bitcoin gains new users: after May 12th, the number of new Bitcoins produced every day will fall from 1800 to 900. “[This] reduction in sell pressure adds up over time and acts as an upward force on the price of bitcoin,” Lissteri explained.

The post-halving price boost could take even longer (assuming that it will happen in the first place): “if we have progressively longer cycles for bitcoin, we could see a fresh high 18-24 months after May, meaning bitcoin could reach a new all-time high between October 2021 and May 2022.” 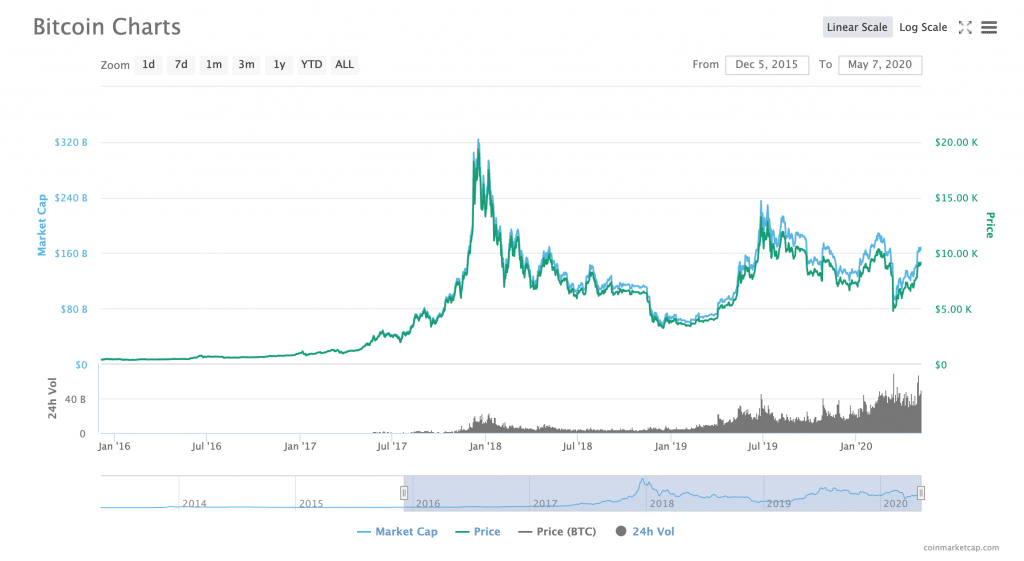 Is the past a reliable predictor of Bitcoin’s future? This time around, the answer may be “no”

However, numbers and protocol aside, there’s a lot that’s different about this halving compared to the previous three halvings that have occurred over the past 10 years–differences that could impact the effects of the halving on the Bitcoin ecosystem over the short- and long-term.

These differences are primarily in the ways that people seem to think about and interact with Bitcoin: when the last halving occurred, Bitcoin primarily existed in a sort of “vacuum”: the big crypto ‘boom’ of late 2017 hadn’t happened yet; there were not yet any crypto derivatives markets.

Indeed, Bitcoin was far less-known and less-used in general: when the after the last halving occurred in July of 2016, BTC’s market cap was hovering around $10.5 billion; there were just 8.95 million BTC wallets. Today, Bitcoin’s market cap is $170.8 billion, and there were 44.69 BTC wallets as of Q4 2019 (Statista).

But it’s not all about market cap and number of users. Indeed, this halving is unique “in a number of ways,” said Jimmy Nguyen, president of the BSV advocacy organization known as the “Bitcoin Association”, to Finance Magnates, hinting at the elephant in the room.

“We are, of course, in the midst of the COVID-19 pandemic, which has had a marked impact on the value and volatility of assets of all classes–digital and otherwise–as economies around the world deal with the ongoing market fallout.”

And indeed, the impact of the coronavirus pandemic on the price of Bitcoin was swift and severe–from March 7th to March 13th, the price of Bitcoin dropped from roughly $9120 to around $4700; most of that decline occurred on March 12th, which has since been colloquially referred to as crypto’s ‘Black Thursday’.

The price of Bitcoin has since recovered to where it was pre-corona, sitting around $9,290 at press time. However, Nguyen argues that the price events surrounding the coronavirus have caused important changes in the way that Bitcoin is perceived, and therefore, could influence its price–and its post-halving behavior–over the long term.

“Over the course of the COVID-19 pandemic, Bitcoin Core has proven the oft-repeated narrative that [BTC] is a store of value resistant to the pressures of traditional markets completely false, as it fell in-line with traditional markets in March before rebounding in April,” he said.

A number of other analysts–particularly those that are publicly skeptical of Bitcoin for one reason or another–have also pointed this out, including notorious gold bug Peter Schiff:

As trade tensions rise and the yuan falls, Bitcoin is trading back above 10K. But don't believe the hype that this rise reflects safe haven buying, similar to gold. Bitcoin is not being bought by investors searching for safe havens, but by speculators betting that they are!

However, while Bitcoin’s ‘safe-haven’ narrative may have taken a hit, Bitcoin bulls may be embracing a new narrative–or, rather, the rising prominence of an old narrative–regarding Bitcoin’s anti-inflationary properties.

“The halving would have been the main event for BTC in 2020, but the impact of the coronavirus outbreak on financial markets has taken center stage,” Jose Llisterri said. “However, it’s a blessing in disguise for BTC in some ways, as the contrast between the unlimited supply of money in countries like the US and the rules-based policy of BTC is stark.”

Indeed, just as soon as the Fed and other central banks around the world began launching relief packages and QE programs to save the global economy from the effects of the coronavirus, cryptocurrency community members started to hear and speak about an old, familiar sound:

The ‘brrr’, of course, was the sound of the proverbial ‘money machines’ that were ‘printing’ brand new dollars–trillions of them, in fact–and pumping them into the global economy, a phenomenon that many cryptocurrency analysts and enthusiasts believe will cause massive fiat inflation, and a consequential movement into Bitcoin or other cryptocurrency assets.

(This theory doesn’t seem to be shared by many analysts outside of the cryptocurrency space.)

However, Llisterri also commented that even within the Bitcoin economy, this halving is set to bring down inflation further than in previous years: “inflation was relatively high in bitcoin in the first three mining epochs but this halving will bring inflation down to 1.80%, lower than the targets of many central banks of 2.00% and almost the same as the annual inflation of gold (1.58%),” he said.

However, even if the coronavirus pandemic hadn’t happened–and if there wasn’t any quantitative easing, and Bitcoin’s ‘safe have n’ narrative was still relatively intact–there are other changes within the economy and the crypto world that set this halving apart.

For example explained that this time around, “there’s a well-developed derivatives market this time round, and there’s some evidence that miners are beginning to use these instruments to hedge their exposure.”

Others in the space have also pointed out that the significant development of the Bitcoin derivatives market since the last halving took place in 2016 could mean that the price-boosting effects that halvings seem to have on the price of BTC may not happen the way that some expect them to, or indeed, at all.

Joe Lallouz, chief executive of Bison Trails, also commented on the halving with regards to changes in trading infrastructure during a Finance Magnates webinar earlier this week: during previous halvings, “the Bitcoin price has been mostly tied to the activity [inside of] the network”–in other words, the price wasn’t heavily influenced by derivatives markets.

David Gerard, author of Attack of the 50-Foot Blockchain, also commented on this phenomenon.

“The price of Bitcoin–the number that you see on the charts–has a lot more to do with BitMEX margin traders trying to kill each other than it does with how interested people are in actual BTC”–which, he added, “is why the price has done such weird things over the last year or so without actual retail volume happening at the same time.”

If nothing else, the halving is a “phenomenal marketing opportunity for Bitcoin”

There’s also the possibility that the upcoming halving may already be priced into BTC: “these events have been known from the outset–a halving is not new information,” said Jimmy Nguyen.

Therefore, he believes that “theoretically, a halving should not have an impact on the price of Bitcoin. When Bitcoin was originally designed, it was done so with an economic system built-in to incentivise miners, with a set schedule of block reward subsidies that halve every four years.”

Steven Wagner, Senior Contributor at Decred.org, has a similar opinion: “this will be Bitcoin’s 4th halving, so no one is expecting any surprises,” he told Finance Magnates, adding that “[although] historically there has been some correlation with price increase and many people are hoping the price will again rise,” it’s possible that “a price rise could be a self-fulfilling prophecy.”

However, regardless of any possible effects that the halving could have on the price of Bitcoin, Zac Prince, chief executive of crypto lending company BlockFi, told Finance Magnates earlier this week that the halving does present another important opportunity for Bitcoin.

“The halving doesn’t matter that much in terms of fundamentals, but it does create a phenomenal marketing opportunity for the space–everyone’s going to be hearing about Bitcoin. It’s going to be all over the press; it already is now.”

What are your thoughts on the effects of the upcoming halving? Let us know in the comments below.