“Once the token is delisted, our system will cancel all pending orders of the TIO trading pairs, and your funds will be returned in full amount to your trading account,” the announcement reads. “However, you are strongly advised to cancel all orders of TIO trading pairs before the delisting for the better management of your funds.”

Trade.io posted a similar notice advising users to transfer their TIO tokens to their “secure smart [wallets] within the trade.io exchange.”

According to Trade.io’s website, plans to de-list from HitBTC, Gate.io, TIDEX, IDEX are also underway. 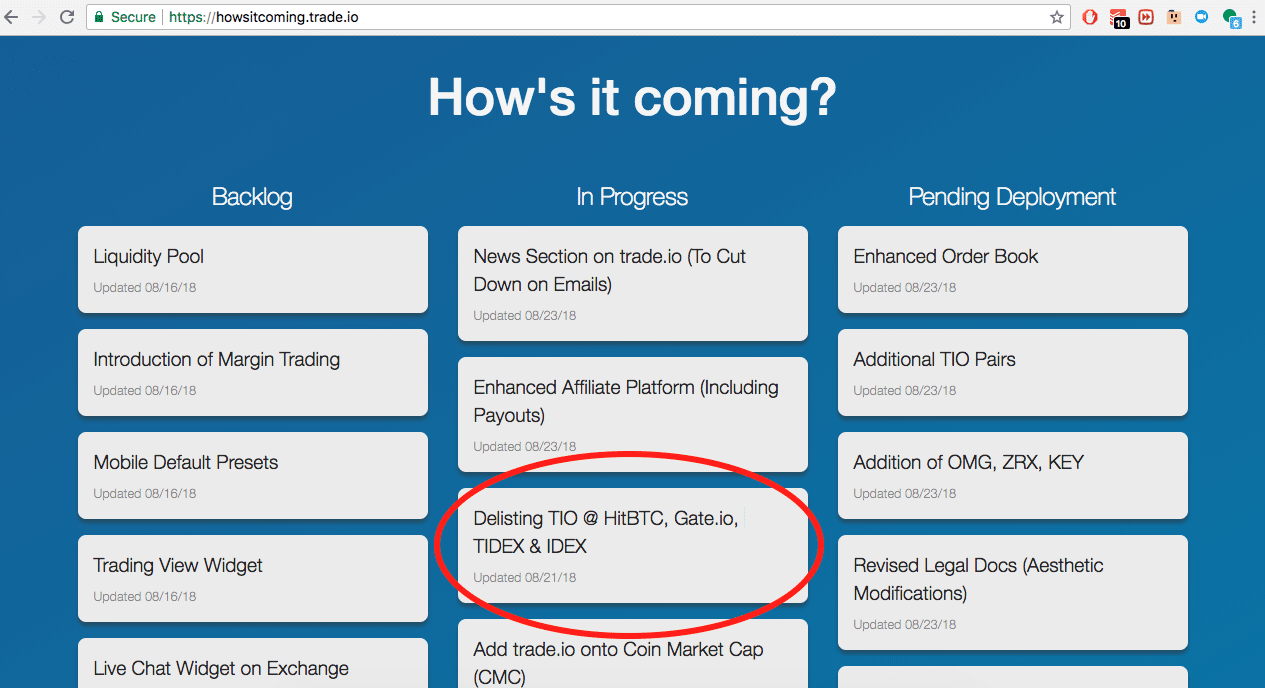 OKEx Demanded that Trade.io Pay Up or Be “Hidden”

In an official announcement on its Telegram channel, Trade.io explained that it had applied for delisting because of demands that OKEx placed on Trade.io. “OKEx reached out to trade.io management and said they would re-activate deposit function of TIO, if trade.io would purchase the equivalent of USD1M in their token. We obviously declined to do so,” the announcement read.

After Trade.io declined to pay OKEx, “we were advised TIO would still be listed, but would be ‘Hidden’ on the Chart Page, with TIO deposit remaining suspended.”

“Following a post we noticed in their social media regarding some sort of delisting, we contacted them last week which they advised that TIO/BTC would indeed be delisted on 12:00 Aug 17, 2018, and TIO/ETH & TIO/USDT would remain ‘hidden’ on Charts,” the announcement concluded. “Happy to answer any questions you may have, and apologize for any inconvenience OKEx has caused you.”


OKEx Has Been the Subject of Scrutiny

In recent months, some voices within the crypto community have voiced concerns that OKEx is using market makers or trading bots to falsify volume on its exchange.

In a May post entitled “Chasing fake volume: a crypto-plague,” self-described trader and investor Sylvain Ribes alleged that up to 93% of OKEx’ volume was “nonexistent.”

OKex [left] fakes its volume in a “laughingly obvious and artificial way,” he wrote. “Compare this perfectly neat and absurdly consistent sinusoidal volume with what happens on an actual exchange [on the right.]”