The cryptocurrency industry is still so new that there aren’t very many companies that have had the chance to grow “too big to fail.” In fact, startups and exchanges fail all the time; if their absence isn’t completely unnoticed, it’s rare that the collapse of a company deeply affects the infrastructure of the cryptocurrency world.

If there’s one company whose failure could have a significant impact on the cryptocurrency world, however, it’s probably Coinbase.

The US-based exchange has millions of users–at its height, more than 11.1 million people were registered on Coinbase; currently, that number sits closer to six million. Coinbase has worked as a political advocate for cryptocurrency, an educational tool for new users, and has made every effort to be the most secure and most compliant cryptocurrency exchange in the world. It is seen as the gold standard by many within and without the industry. 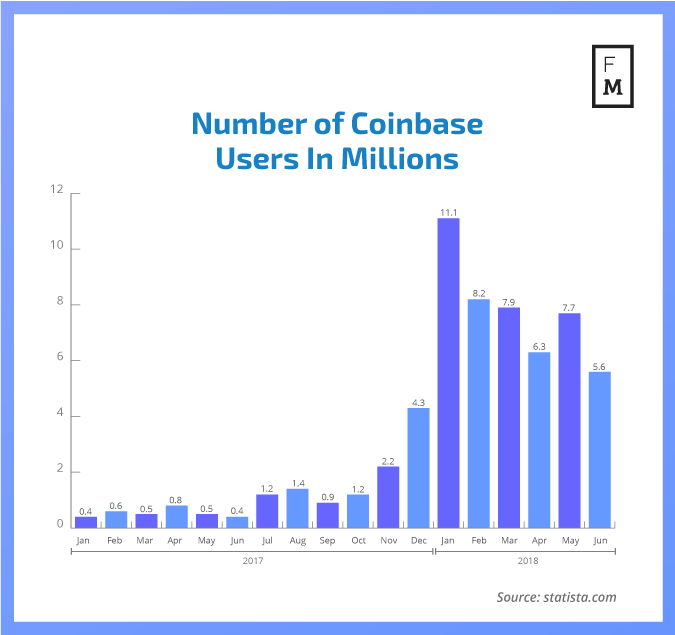 Therefore, Coinbase’s recent acquisition of Neutrino, a blockchain intelligence firm with ties to a company that facilitated blatant human rights violations, was particularly shocking. Many users who have been made aware of the acquisition (and Coinbase’s response to its community’s reaction) have joined the #DeleteCoinbase movement.

How serious is this PR disaster for Coinbase? And what are the implications of Coinbase’s response?

Here’s What We Know

Today we’re announcing Coinbase has acquired Neutrino, a blockchain intelligence platform. Neutrino’s technology is the best we’ve encountered, and will play an important role in legitimizing crypto, making it safer and more accessible for everyone. https://t.co/6gXcRvpEBM

Coinbase also hinted that the acquisition of Neutrino would help it to comply with laws and regulations, which would lead to the addition of more cryptocurrencies and other features to its platform in turn.

All told, Coinbase paid $13.5 million for Neutrino. The sum of the payment was unknown until March 6th, when Bitcoin Magazine managed to obtain a copy of the acquisition contract. According to the terms of the document, Coinbase obtained “the units of the respective total ownership representing the entire share capital of the Company [Neutrino].” Neutrino CTO Alberto Ornaghi and CEO Giancarlo Russo each receive $2.9 million in exchange for their shares in the company.

However, Coinbase quickly came under heavy fire shortly after the acquisition went public due to Neutrino’s past associations with egregious human rights violations–a factor that Coinbase apparently failed to take into account when the acquisition was made.

Before they became the founders of Neutrino, CRO Marco Valleri and CTO Alberto Ornaghi were executive members of “Hacking Team,” an intelligence firm that built and sold spyware tools to various government agencies around the world. Additionally, Neutrino’s current CEO, Giancarlo Russo, was the COO of Hacking Team.

Hacking Team’s past activities are very serious indeed. Reporters Without Borders named Hacking Team as one of five “Corporate Enemies of the Internet,” and reported that the spyware that Hacking Team created was used by governments who are widely known for their human rights and freedom of information violations–Syria, China, Iran, Bahrain, and Vietnam among them.

Additionally, the Washington Post reported that Hacking Team collaborated with the same Saudi Arabian enforcement unit that murdered Jamal Khashoggi, one of its journalists. Hacking Team also assisted the Ethiopian regime to monitor the activities of dissident expatriates and planted spyware targeting an Ecuadorian activist who opposed the government of President Rafael Correa.

As the details about the company’s rather unsavory past spread like wildfire, so did the crypto community’s criticism of Coinbase: “#DeleteCoinbase” appeared across Twitter,  and other social media sites as members of the crypto community encouraged each other to delete the Coinbase app and close their accounts.

Until @coinbase is willing to tell us otherwise, assume former Hacking Team members are still around the office mooching donuts. And your data. #deletecoinbase https://t.co/ig8ZARmd6l

Another hashtag, #DeleteCoinbaseTrustChain, emerged as users attempting to withdraw all of their funds (which is required before accounts can be deleted) found difficulty in emptying tiny amounts of BTC and other cryptocurrencies. Instead, users sent residual amounts of Bitcoin to one another so that their accounts could be closed.

Indeed, the acquisition was an absolute PR disaster for Coinbase. And indeed, it should have been.

The fact that Coinbase made this mistake is particularly significant “precisely because it acts as a steward and custodian of a very large amount of people’s funds and assets, Coinbase’s business model depends on it building up and maintaining trust with its customers,” wrote Michael J. Casey, chairman of CoinDesk’s advisory board and senior advisor for MIT’s Digital Currency Initiative.

Coinbase, apparently realizing its mistake, was quick to respond. The company’s CEO, Brian Armstrong, explained in a blog post that Coinbase’s intentions were good when it made the decision to require Neutrino. “Until recently, we worked with several outside vendors that provide blockchain analytics,” he wrote. “…We knew at some point that we would need to bring this capability in house.”

“[We] found that Neutrino had some of the best technology in this area, and decided to acquire them,” he continued.

As a result of the drama, Armstrong said that “together with the Neutrino team, [we] have come to an agreement: those who previously worked at Hacking Team (despite the fact that they have no current affiliation with Hacking Team), will transition out of Coinbase.”

Armstrong explained that Coinbase’ decision was made because of ignorance rather than ill-intent. “We had a gap in our diligence process,” he said. “We did not properly evaluate everything from the perspective of our mission and values as a crypto company.”

I sent @coinbase some questions regarding their controversial acquisition of blockchain analytics firm Neutrino. They didn’t answer any of the specific questions, but they sent over this official statement. pic.twitter.com/DFUxWgkvwm

And Coinbase was (in a way) attempting to protect its customers’ data. Christine Sandler, Coinbase’s head of institutional sales, told Cheddar that in the past, third-party providers “were actually selling client data to outside sources.”

“Trust isn’t as easily maintained as Coinbase seems to think it is.”

But, as Casey wrote for CoinDesk, “the company’s argument – that this is best-of-class tech and that by bringing it ‘in-house’ the company can be sure that it will ‘fully control and protect our customer’s data’ – depends entirely on the presumption that users can trust Coinbase to act in their interests.”

“And trust isn’t as easily maintained as Coinbase seems to think it is,” Casey continued. “Hiring people who worked on such unsavory projects as the Hacking Team is a good way to lose it.”

Indeed, users have to wonder that if Coinbase is so eager to work with a firm that has such egregious ties to human rights abuses, what kind of user rights is Coinbase willing to violate itself?

Further, Jesse Powell, CEO of US-based cryptocurrency exchange Kraken, said that Neutrino had come in “last place” on its own evaluation of possible in-house data firms.

I asked our Compliance team what they thought of Neutrino. Fortunately, they’d just completed an evaluation. Neutrino came in last place on product (out of the 5) but was disqualified anyway due to the risks. However, other factors are important in M&A: cost, culture fit. pic.twitter.com/kiYh11GEBc

“How can you claim that Neutrino doesn’t tacitly endorse [Hacking Team’s] behaviors, or that the overall culture of the organization isn’t similar?”

Was Coinbase’s decision to phase out the Neutrino executives who were associated with Hacking Team enough?

For many, the answer is a resounding “no.” Alan Dubla, Co-founder & CEO of Waves mining pool and crypto marketplace Waves World explained to Finance Magnates that at the end of the day, “Neutrino hired members of Hacking Team, which has links to oppressive regimes.”

“How can you then claim that Neutrino doesn’t tacitly endorse those behaviours, or that the overall culture of the organisation isn’t similar? Removing a few individuals most closely associated with the problem doesn’t change that fact.”

“We need a further statement on this,” Dubla continued. “Not just from Coinbase, but from Neutrino.”

“Coinbase rightly pointed out that Hacking Team’s activity was against their core values. We need to know that Neutrino isn’t tainted by that – and it’s hard to see how they couldn’t be.”

Would Coinbase Have Taken Action to Eliminate the Hacking Team from Neutrino if Users Hadn’t Protested?

Further, an argument could be made that Coinbase would have happily continued its work with all of Neutrino–including the executives who were formerly associated with the Hacking Team–had its user base not protested so vehemently.

Before Armstrong’s statement was posted on Coinbase’s blog, Coinbase said in a statement to crypto news publication The Block that it was “aware that Neutrino’s co-founders previously worked at Hacking Team, which we reviewed as part of our security, technical and hiring diligence,” and that “Coinbase does not condone nor will it defend the actions of Hacking Team.”

All the same, however, “it was important for Coinbase to bring this function in-house to fully control and protect our customers’ data and Neutrino’s technology was the best we encountered in the space to achieve this goal.”

Coinbase Supporters Are Being Struck Down, Too

For some, however, Coinbase’ actions weren’t so offensive. Among these supportive voices was Roger Ver, formerly known as “Bitcoin Jesus”. He argued that Coinbase’s track record as a political advocate for the cryptocurrency world and a user-friendly gateway into the cryptosphere for first-time buyers ought to earn the company a bit of leeway.

Coinbase has done more to drive crypto currency adoption than just about any other company. We should be grateful despite a few poor decisions along the way.
Don’t #DeleteCoinbase

However, Ver’s advocacy for the exchange quickly backfired. The Twittersphere lit up with recollections of the time that Ver claimed that scandalized Bitcoin exchange Mt Gox was solvent months before its disgraceful collapse.

When it comes to Roger Vers advice on exchanges, do the exact opposite. pic.twitter.com/6pIFrdK7zh

Indeed, those who have their hearts set against Coinbase are unlikely to listen to Ver or anyone else. After all, trust has been broken, and it’s going to be extremely difficult–if not impossible–for Coinbase to earn it back.

The truth is, however, that Coinbase’ user base is so vast and so diverse that most of its users are probably completely oblivious to its latest blunder. While this disaster struck hard within the cryptocurrency community, most of the rest of the world is most likely happily plodding along, and will never know that the #DeleteCoinbase movement ever began.