Johann Gevers, president of the embattled Tezos foundation, wrote in a Medium post on Sunday entitled “Moving Tezos Forward” that he has “consistently communicated… [his] intention to step back from the Foundation as soon as things are on track with a new board that is independent and has the support of the Tezos community.”

Although the original post was later removed for what Gever cited as “prudential” reasons, Gevers wrote in a replacement post that the Tezos Foundation is working to meet the goals that were outlined. 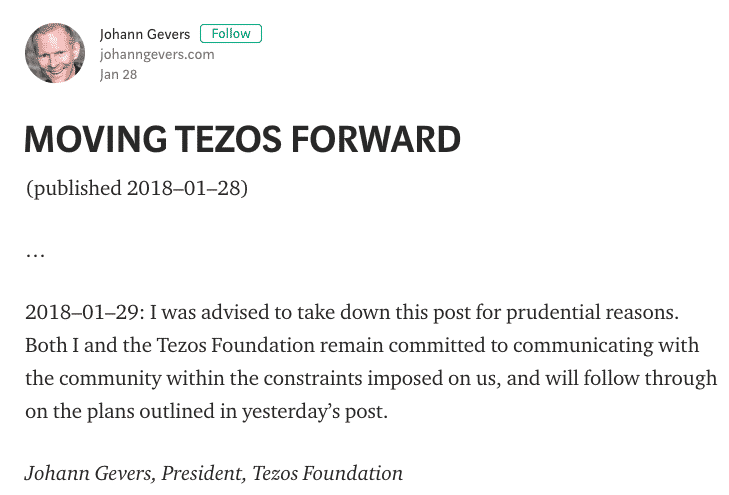 Gevers (who also happens to be the founder of the Crypto Valley Association in Zug) became involved with the project when he agreed to assist Tezos creators Arthur and Kathleen Breitman in founding the Tezos Foundation in Switzerland. After the foundation was established, Gevers became its president.

Tezos has branded itself the ‘self-amending crypto ledger’, a blockchain with a built-in consensus mechanism, and the Tezos ICO, which took place in July of 2017, is one of the largest ICOs in history to date–north of $400 million were raised.

The Breitmans accused Gevers of ‘self-dealing’; Gevers accused the Breitmans of ‘character assassination’ and of attempting an illegal coup to oust him from the foundation.

Problems continued to develop as at least four separate law firms in the United States brought class-action lawsuits against Tezos for incorrectly representing the legal status of the tokens sold in the ICO.

Things came to a head near the end of 2017, when Reuters reported that the Tezos Foundation’s financial transactions had been frozen.

Now, Tezos has regained access to some of its banking services (enough to pay employees and creditors); Gevers confirmed in the blog post on Sunday that the Foundation has hired a new law firm and is currently searching for an accounting firm.

Following the original reports of infighting that sent Tezos futures tumbling, Kathleen Breitman told the audience at the Money2020 conference in Las Vegas that the incidents would soon blow over. Tezos tokens (colloquially known as ‘Tezzies’) are still scheduled to be distributed in February, as was the original plan. However, the future of the token is very unclear.

Share this article
Tags: ICO / lawsuit
Got a news tip? Let Us Know