Stablecoin issuer Tether has been the subject of much controversy over the last several years. Following accusations that Tether Dollars (USDT) were being printed without the reserves to back them, serious questions about the company’s integrity, and a court case with the New York Attorney General, the public seems to have a more varied (though perhaps more clear) picture of the stablecoin than it ever has before.

Despite the controversy, though, Tether is stronger than ever. USDT’s market cap has more than doubled since the beginning of the year. 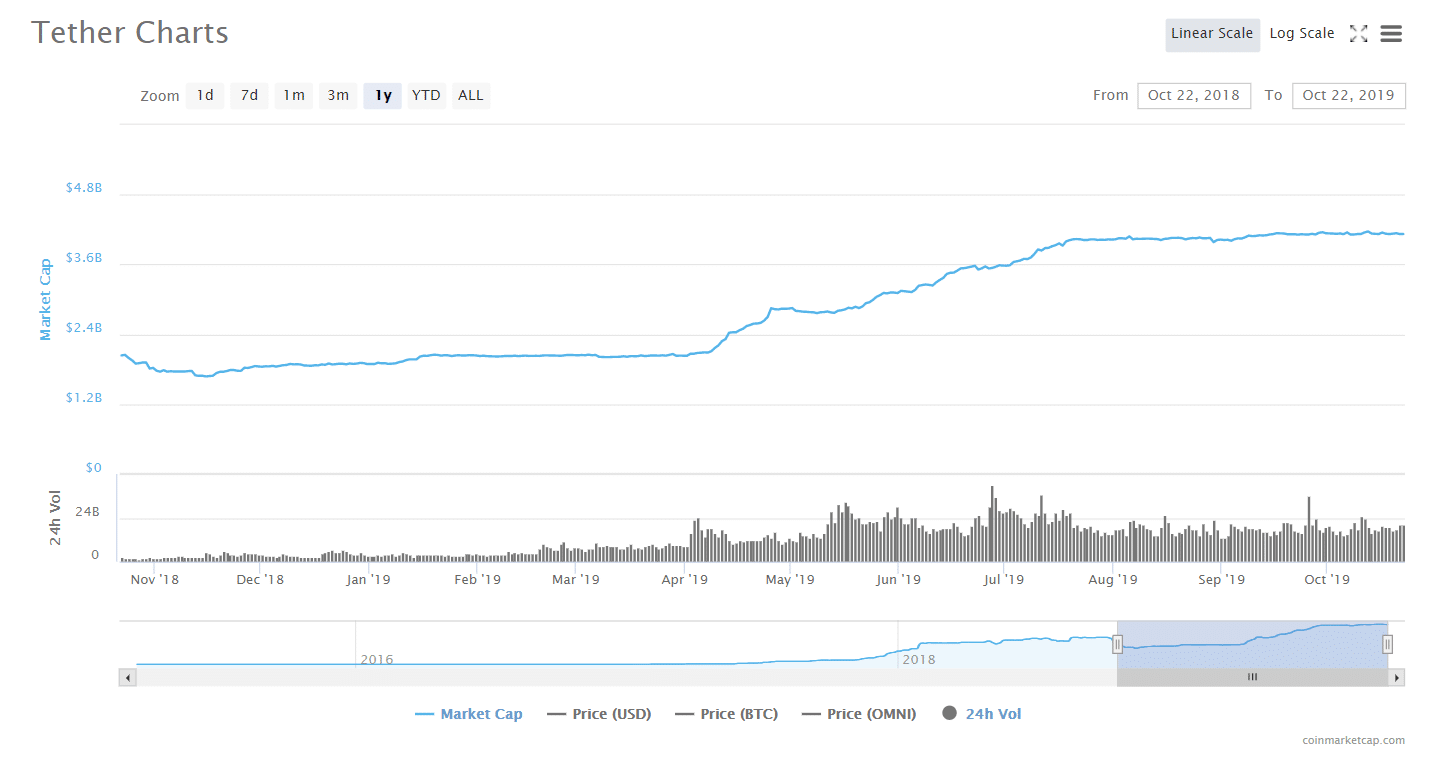 While a wave of bullish activity in cryptocurrency markets can explain much of this, a great deal of new USDT trading volume can be traced back to a single location: China.

Why is this, and what does it mean for the industry?

A recent report by blockchain research firm Chainalysis found something rather interesting. While in Japan and Korea, almost 100 percent of the trades between Bitcoin and a fiat currency were compromised of trades with the corresponding fiat currency of each country–the yen in Japan and the Won in Korea–data from China painted a different picture.

Indeed, trading data gathered from exchanges that serve users in mainland China showed that nearly no one is exchanging BTC for Yuan (CNY). Instead, almost all of the trading volume from mainland China was between CNY and USDT. “In other words,” Chainalysis wrote in a report, “for Chinese exchange users, Tether has replaced the yuan as the go-to fiat currency.”

Why is USDT so popular in China when it isn’t used very much at all in similar circumstances in adjacent markets?

And indeed, looking at how trading data has evolved over time is striking: Within the first several months of 2018, Chinese trading volume between BTC/CNY was first replaced by BTC/USD, and then by BTC/USDT.

CNY to BTC trades may still be taking place on OTC platforms, although data is difficult to gather

However, Chainalysis acknowledged that the data it gathered–which is publicly available information on trading volume from cryptocurrency exchanges–may not paint the whole picture.

Indeed, while cryptocurrency exchange trading data is perhaps the best metric for understanding cryptocurrency markets that is easily available, it doesn’t capture trading volume that results from over-the-counter (OTC) cryptocurrency trades–data that is notoriously difficult to collect.

In an article for CoinDesk published in August, Primitive Ventures co-founder Dovey Wan–who also occasionally acts as a liaison between crypto media in the eastern and western hemispheres–wrote that over-the-counter trading is “where most fiat to crypto volume in China has shifted to since the regulation.” In other words: while traders may no longer be allowed to trade crypto for CNY on exchanges, they still have the ability to do it on OTC platforms (out of sight, out of mind.)

From there, Wan says, the data becomes nearly impossible to track–using KYC identities purchased online, traders can “freely exchange” their newly obtained BTC or USDT, “even ones that try to block Chinese customers, by using the credentials of people from other countries.”

And indeed, data from Chainalysis shows a massive influx of cash onto ten OTC trading platforms that provided the firm with data.

Wan explained that these OTC platforms are often trading desks offered by cryptocurrency exchanges themselves (i.e., Huobi), but they can also be WeChat groups with strict sets of rules. While any of these groups may not process a high amount of trading in isolation, Wan writes that together, they “add up to a significant amount of crypto trading volume originating from China that is not accounted for by official figures.”

Perhaps aware of the fact that so much OTC trading was happening through its channels, WeChat updated its user policy in May so that cryptocurrency could no longer be used to pay merchants on the app. Dovey Wan tweeted that “this may impact local liquidity to quite some extent.”

Given most OTC transactions are happening in wechat, this may impact local liquidity to quite some extent pic.twitter.com/TdNIO6cggS

The popularity of USDT in Chinese crypto markets has also been demonstrated by the development of a premium price for USDT on OTC platforms.

In April of this year, cnLedger, a popular Twitter account that analyzes cryptocurrency and blockchain in Chinese markets, published tweets saying that there was a “considerable premium” on USDT on OTC exchanges.

“Why the USDT premium going up?” cnLedger asked in a second tweet. The account’s reasoning also pointed to an increased interest in USDT after the crypto ban: “after the PBoC ICO/exchange ban, the most convenient way to buy cryptos in China, is to buy stable coins like USDT first using OTC, and then trade it into any cryptos you want in exchanges.”

The continuing prevalence of the use of USDT in Chinese crypto markets was also reflected in findings published by Binance Research in June.

“Despite the crypto market’s recent correction, Tether’s OTC premium in China (USDT/CNY) shows few signs of disappearing,” Binance Research tweeted. “Instead, it rose to its highest level in 2019 [in June]--showing the willingness for new money to enter the crypto market.” (Data for USDT/CNY premiums is unavailable for the second half of the year.)

Are East Asian countries going all in on Crypto?

- Leveraged $BTC on @Bitflyer has persisted since mid-May 2019

- BTC / $KRW has recently seen premiums of up to 5% on @BithumbOfficial, a 7 month high

- China's OTC premium on $USDT / $CNY has risen to its highest levels in 2019 pic.twitter.com/8aH7tePk0n

However, other recent activity from Binance could point to continued opportunities to profit off of China’s USDT premium and the apparent high liquidity in USDT/CNY markets.

Binance announced earlier this month that it would begin accepting fiat currency deposits through AliPay and WeChat for its services, which include a peer-to-peer trading for Bitcoin (BTC), Ether (ETH) and Tether (USDT) against the Chinese yuan (CNY), also launched earlier this month.

However, s the announcement of these WeChat and Alipay fiat onramps required some quick clarification. Binance CEO Cangpeng Zhao tweeted that “Binance is not working directly with WeChat or Alipay. However, users are able to use them in P2P transactions for payment.”

Some confusion by some news outlets. @Binance is not working directly with WeChat or Alipay. However, users are able to use them in P2P transactions for payment.

Still not a small feat. But words/meaning get twisted as they are passed around. https://t.co/uQ8KmD1TQB

If any transactions are identified as being related to bitcoin or other virtual currencies, @Alipay immediately stops the relevant payment services.

Several tweets about the WeChat- and Alipay-to-Binance fiat payment channels have also been removed from Changpeng Zhao’s Twitter account.

The explosion of usage of USDT in Chinese crypto markets has also been reflected in the other coins that Chinese traders are using the Tether dollars to purchase--primarily, Bitcoin.

After all, Chainalysis writes, roughly 40 percent of the world’s top-50 cryptocurrency exchanges in terms of on-chain Bitcoin activity are located in the Asia-Pacific (APAC) region; the first half of this year, those exchanges accounted for 35 percent of all Bitcoin received.

Bloomberg also reported that “the region’s exchanges also dominate the trading in options and futures, with nearly 90% of the 2.36 billion contracts traded globally.”

In other words, there’s a lot going on in the APAC region in terms of trading activity, and investors should be watching closely: “people should be paying more attention to the price formation on the large Asian exchanges,” said Philip Gradwell, chief economist at New York-based Chainalysis, to Bloomberg.

“There’s probably going to be a large amount of liquidity there that, for example, these OTC brokers will be providing. It can move very fast.”