It seems that old dogs can learn new tricks–in its 137th year, Eastman Kodak Company is jumping on the blockchain bandwagon.

Kodak’s new blockchain-based platform, called ‘KodakOne’, will be powered by the so-called KodakCoin. KodakOne’s blockchain will act as an encrypted ledger of rights ownership that photographers could potentially use to register and catalogue all of their work, new and old. Photographers can also license their work within the platform.

KodakOne will use smart contracts and “provide continual web crawling” to ensure that photographers are receiving compensation for their work–if the unlicensed use of an image recorded in the KodakOne blockchain is detected, the platform will enact a post-licensing process to ensure that photographers are compensated; artists will be paid in KodakCoins, which can then be exchanged for fiat or other cryptocurrencies.

Kodak CEO Jeff Clarke believes that blockchain technology could be an integral part of the future of photographic work. Acknowledging that ‘blockchain’ and ‘cryptocurrency’ have been overused as buzzwords in the wake of the Bitcoin boom, Clarke said that “for photographers who’ve long struggled to assert control over their work and how it’s used, these buzzwords are the keys to solving what felt like an unsolvable problem.”

WENN Digital CEO Jan Denecke added that “it is critical photographers know their work and their income is handled securely and with trust, which is exactly what we did with KodakCoin.” WENN Digital is an “experienced development and operations team with deep expertise in proprietary blockchain development, big data, copyright law, AI-enabled image recognition and post-licensing monetization systems.”

Echoes of the Past?

Following the announcement of the initiative, the stock price of Eastman Kodak Company (NYSE: KODK) jumped just under 120%. Garrick Hileman of the University of Cambridge told the BBC that “this is a phenomenon we saw back during the dot com days in the late 1990s where traditional companies would mention some kind of internet strategy and their stock price would jump up.” 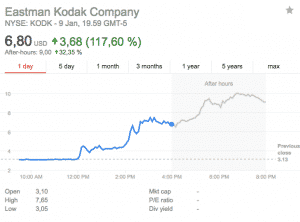 Indeed, the Long Island Iced Tea Corporation saw a 400% increase in stock price in December of 2017 after the company rebranded itself as “Long Blockchain”. According to a recent report from Business Insider, however, has since “walked back its announcement to raise capital through a new stock issuance” that was originally intended to purchase Bitcoin mining rigs.

Kodak has also developed plans to begin its own Bitcoin mining operation at its headquarters in Rochester, New York. According to ZDNet, Kodak-branded mining rigs called ‘Kodak KashMiners’ were showcased by Spotlite Energy Systems of California, a Kodak Blockchain Project licensee, at CES 2018.

A two-year contract with the mining project for the low, low price of $3400 will reportedly produce returns of about $375 per month, totaling $9000 over a two-year period–the licensee will reportedly receive half of that.

Unlike the Long Blockchain project, it seems that Kodak’s embrace of cryptocurrency and blockchain technology has some real substance to it–the technology will be used in a very practical way. Jeff Clarke said:  “Kodak has always sought to democratize photography and make licensing fair to artists. These technologies give the photography community an innovative and easy way to do just that.”

The marriage of the star power of blockchain with the long history of Kodak could continue to be a real “Kodak moment” for the company–and for investors.