Taiwan-based cryptocurrency exchange Cobinhood may soon become the latest crypto company to collapse–however, there are some conflicting reports as to what is actually going on.

According to CryptoSlate, the company has reportedly filed for bankruptcy and appointed a liquidator to lay off its entire staff, which is especially shocking considering the company’s recent successful completion of the Dexon (DXN) ICO. The token sale raised $3.5 million last month.

Other sources say that Cobinhood itself has not declared bankruptcy, but that its parent company, Cobbingham Digital Finance Co. Ltd., has. “This will not cause Cobinhood to stop functioning,” said a report from NullTx.

The result is confusion and chaos. No news of the bankruptcy has been publicly addressed by Cobinhood or its founders, who had not responded to multiple requests for commentary at press time.

The confusion has caused crypto community members to decry the exchange’s struggle to be an exit scam.

Investors in the exchange feel that they have been misled. The company reportedly announced several months ago that it would be laying off some of its employees to “[increase] efficiency”; no indication that the company was in danger of bankruptcy was mentioned.

Additionally, the Dexon (DXN) coins that were sold in the ICO were scheduled to be unlocked and distributed on May 20th. However, the 20th has come and gone, and token buyers reportedly still have not received their coins.

Still, one of the founders of both Cobinhood and Dexon, Wei-Ning Huang, has said a few words to reassure users that nothing is amiss with Dexon, although much more clarification is needed.

“Taiwan company is being restructured, but everything is working as usual,” wrote Huang in the Dexon Telegram group. “We unstaked some nodes owned by the foundation to cut the operation cost. We did not dump any foundation owned DXN tokens.”

“Please give us sometime to reorganize, stay tunned (sic),” he said.

Meanwhile, the pinned post in the @Cobinhood Telegram group contains fragments of what could be the explanation to the confusion, posted by a user who doesn’t have any apparent affiliation with the company: 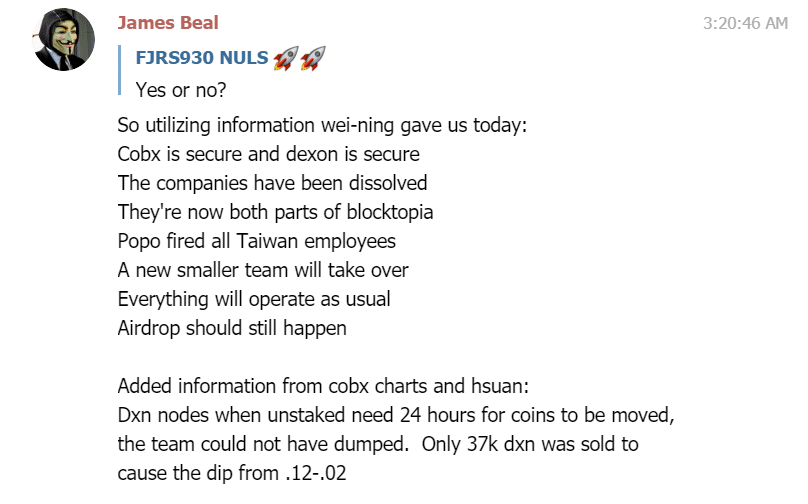 The world is watching.