Bitcoin has been getting a healthy share of attention over the last several weeks. Having stabilized around $16,000 for the last several days, the coin has more than doubled in value compared to just a month ago. However, BTC isn’t the only cryptocurrency that has been receiving high marks as of late.

In fact, Bitcoin’s growth over the last 24 hours (at the time of writing) was below 1%, a rather paltry amount compared to the rallies happening in the Litecoin and Ethereum valuations, which have gained roughly 30% and 20% respectively. If those numbers aren’t eye-popping enough, Ripple has bounded up nearly 70% over the same time period (what!?).

Indeed, CoinMarketCap is a veritable lush, green pasture at the moment; across-the-board rallies, large and small, have boosted the altcoin market to the tune of nearly $20 billion. The cryptocurrency market cap as a whole has officially surpassed half a trillion dollars. 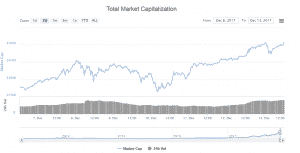 So, what’s driving these percentages to the moon? Bitcoin rallies are typically followed by some pleasant run-offs into the altcoin market, but there are some additional factors to consider.

In a report from Forbes, renowned cryptocurrency investor Oliver Isaacs said that the increase in Litecoin’s valuation is the result of “the broader interest in cryptocurrencies.” Indeed, Litecoin has benefited heavily from its inclusion as one of the three cryptocurrencies that can be purchased with fiat on the popular Coinbase app and its exchange, GDAX. Over the last several weeks, Coinbase has trended as one of the most popularly downloaded apps on Android and iOS.

This Sunday marked the advent of Bitcoin futures trading on CBOE , with the upcoming launch of Bitcoin futures on CME this coming Monday and NASDAQ in the relatively near future. Rumors that emerged yesterday that CME and CBOE have also been considering trading LTC and ETH futures may be contributing to the LTC rally. Further driving the Litecoin rally is Shakepay’s announcement that Litecoin would be included on its platform.

Litecoin’s founder, Charlie Lee (who uses the Twitter handle ‘@SatoshiLite’), is the former director of engineering of Coinbase. Lee’s creation was the first fork of the original Bitcoin Core protocol, and remains nearly identical to Bitcoin to this day. Lee seems to be pretty proud of his “little chikun”:

Going up 100x in a year is unheard of even in crypto space. The little chickun that could! pic.twitter.com/sPRMRffeCW

Litecoin was created to be the silver to Bitcoin’s gold, called ‘lite’ because the network is somewhat more flexible and adaptable than Bitcoin’s. While the two coins have nearly identical protocols, there are several crucial differences. One Litecoin’s ability to process transactions at a higher rate than Bitcoin. In addition to having a larger block size than Bitcoin, a block on the Litecoin network is created once every 2.5 minutes, a quarter of Bitcoin’s 10-minute block times. Litecoin’s total token supply caps off at 84 million, while Bitcoin’s stops at 21 million. Litecoin also requires less energy and resources to mine than Bitcoin.

The rally around Ethereum can be attributed to some of the same things that seem to be causing the LTC rally – that is, inclusion on the Coinbase app and rumoured consideration for ETH futures trading on CME and CBOE are certainly not hurting ETH’s valuation.

Additionally, 23-year-old Ethereum creator Vitalik Buterin tweeted yesterday that the Ethereum network had consistently processed a record ten transactions per second throughout the day on December 11.

Committed to Ethereum’s mission to decentralize financial services and other parts of the world economy, Buterin took to Twitter in the wake of the news that the cryptocurrency market cap reached over half a trillion dollars. He wondered aloud whether or not the crypto community of creators and developers had really “earned” the new status. “How many unbanked people have we banked?” he wrote. “How much censorship-resistant commerce for the common people have we enabled?”

Mashable reported that SEC Chairman John Clayton’s recent statement on ICOs may also be driving Ethereum’s bullish run. ICOs, which typically take place on the Ethereum network, have been the subject of worldwide scrutiny over the last several months.

While the statement’s primary purpose seemed to be to caution potential ICO investors against reckless investing, the evaluative guidelines in the statement may have given more confidence to investors who were previously unsure of how to tell the difference between legitimate and illegitimate ICOs.

Ethereum additionally announced an initiative of its own to regulate the ICO industry in a partnership with Deloitte, Waves, and IGF. On Monday, Finance Magnates reported that “the focus of the new association is to provide reporting, legal, tax, ‎accounting, KYC and business due diligence standards” with regard to ICOs and token crowdsales.

It’s also possible that the revelation UBS’s plans to adopt the Ethereum network as a platform for inter-bank data reconciliation has caused increased interest in the coin. So far, the plans will involve UBS, Barclays, SIX, Credit Suisse, KBC, and Thomson Reuters, although Peter Stephens, the head of UBS’ blockchain and research development efforts, has said that the network could eventually serve the entire banking industry.

According to a report from CryptoCoinsNews, the rise of Ripple (which has reached an all-time-high of $0.45/XRP) can be at least partially attributed to the recent announcement that Ripple has placed “55 billion of its estimated 61.8 billion XRP into escrow.”

One billion XRP tokens will be taken out of escrow each month, and any unused tokens will be placed back in. The decision to take this course of action may have increased investors’ confidence that Ripple will not flood the market with an overabundance of tokens, causing individual tokens to lose their value.

On its blog, Ripple wrote that XRP investors now have the ability to “mathematically verify the maximum supply [of XRP] that can enter the market.” The post continued:

“While Ripple has proved to be a responsible steward of XRP supply for almost five years – and has clearly demonstrated a tremendous track record of investing in and supporting the XRP ecosystem – this lockup eliminates any concern that Ripple could flood the market, which we’ve pointed out before is a scenario that would be bad for Ripple!”

Ripple has been making a name for itself across the banking and payments industries as the crypto-of-choice for firms all over the world. More recently, Ripple has been adopted as a means of making cross-border remittances by some of the world’s major banks, including Axis Bank (India), Standard Chartered (Singapore), and Rakbank (UAE). In November, Ripple announced a partnership with Amex and Santander to process transactions between the US and the UK.

Charlie Lee has encouraged investors to take the long view when it comes to Litecoin, but his words ring true for each of the rallies that have taken place . He tweeted: “Every crypto bull run I’ve seen has been followed by a bear cycle. The market needs time to consolidate. That’s just my experience from 7 years of watching this space.”

So if you had $500 where would you put your money today?