Entrepreneurs, developers, and investors within the cryptocurrency space have been waiting for years for the moment that cryptocurrency will truly be adopted for usage on a large scale. There has been much speculation about what could cause this adoption to happen–some have even predicted that an inevitable global financial crisis will be what truly brings crypto into the “mainstream.”

However, even those who predict such a doomsday for the world of finance as we know it can acknowledge that in the meantime, the thing that’s really going to drive cryptocurrency adoption is accessibility. As crypto platforms become increasingly user-friendly and available, more and more people come into the cryptosphere to stay.

Therefore, the launch of Samsung’s newest smartphone, the Galaxy S10, has caused quite a bit of excitement within the cryptocurrency industry. Some believe that the phone, which will come equipped with a built-in “cold” (offline) cryptocurrency wallet, is the thing that will finally bring crypto to the masses. 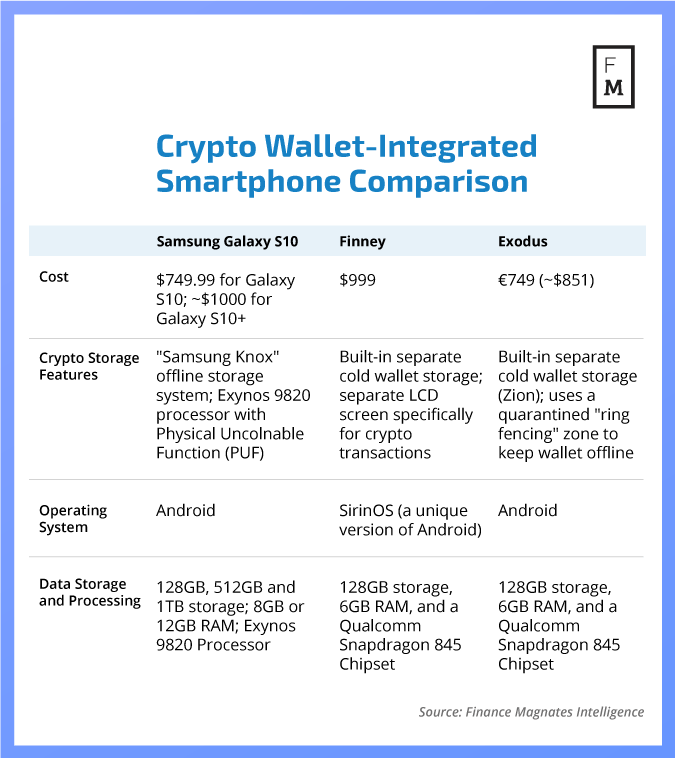 But what could the launch of the phone actually mean for cryptocurrency adoption? And is Samsung leading the charge in a mobile crypto wallet revolution?

Here’s What We Know

Images of the leaked Galaxy S10 originally emerged on Twitter in January. The pictures, posted by Twitter tipster Gregory Blake, showed the phone displaying what appeared to be a cryptocurrency wallet interface.

However, rumors that the S10 would have cryptocurrency wallet integration had already begun circulating in December. Samsung dismissed the rumors as nothing more than speculation at the time, although the company did file for a trademark entitled “Samsung Crypto Wallet” with the UK’s Intellectual Property Office on December 27, 2018.

Then, when the phone was finally unveiled on February 20, 2019, the rumors were confirmed–the Galaxy S10 does have cryptocurrency hardware wallet integration.

?? – Samsung now priming their phones with Blockchain tutorials. The wallet integration on the Galaxy S10 has been confirmed… even after they denied it. Trying to keep Apple on their toes? pic.twitter.com/wAd7EaPzKw

The Hardware Wallet Will Be Based on Samsung’s “Knox” Technology

Samsung’s hardware crypto wallet will be based on a feature that the company is calling “Samsung Knox,” apparently named in reference to the famous fort.

Samsung describes Knox as a platform that is “built into Samsung smartphones, tablets, and wearables at the manufacturing stage, so you have it the moment you unpack your device. The Knox platform consists of overlapping defense and security mechanisms that protect against intrusion, malware, and more malicious threats.”

According to a report from Android Central, Samsung Knox has already been around for several years. It’s a hardware and software security layer that is capable of separating and isolating personal and business user data. Therefore, it’s capable of storing private keys for cryptocurrency wallets and other blockchain applications.

“You can almost think of [Samsung Knox] as a way to turn one phone into two because of the way it manages apps and the data those apps create, as well as any data you enter into them,” the same report explained. Users tap on the Knox icon and enter a password in order to access a separate piece of hardware that is kept offline.

Knox is certified for government use in several countries, including the UK, the US, the Netherlands, France, Spain, and Kazakhstan. The technology is also FIPS 140-2 and ISCCC compliant. Practically, this means that the US Department of Defense believes that Samsung Knox is safe enough for its employees to use.

How Secure is the S10’s Crypto Wallet?

Because Samsung Knox has already been a part of Samsung phones for some time, it wouldn’t be entirely true to say that the platform was integrated specifically to store cryptocurrency. However, the Galaxy S10 is the first instance in which Samsung has added additional security features to the platform specifically for cryptocurrency storage.

One of the more intriguing details about the new smartphone is the Exynos 9820 processor, which is believed to be important to cryptocurrency wallet integration. The newest version of the processor is equipped with PUF (Physical Unclonable Function) technology. PUF is particularly useful for storing encryption keys.

PUF is “also known as a digital fingerprint,” and is used “to manage personal data in perfect isolation, making for more reliable security,” an announcement from Samsung explained.

“PUF generates an unclonable key for data encryption by using the unique physical characteristics of each chip. While the PUF creates a unique digital fingerprint, the security subsystem is a secure key manager that supports other security protocols, such as key generation, storage and derivation.”

The fact that Knox has already been around for some time presents Samsung with an advantage over other devices whose technology is relatively unvetted. While other smartphones with integrated crypto wallets may be equipped with cutting-edge technology, Samsung’s Knox has a reputation for security that the others just don’t have yet.

Enjin Could Be Chosen As Samsung’s Default Wallet

It’s still unclear at this point if the software that will facilitate the generation of the private keys that the wallet will be created by Samsung itself or by a third-party company.

However, there is some strong speculation that South Korean cryptocurrency company Enjin Wallet has been chosen by Samsung as the official backer of the S10’s cryptocurrency wallet. Anonymous sources provided Asia Crypto Today with an image of Enjin being used on the S10 on Monday, February 25th.

More specifically, the image depicts the Enjin wallet being used in the Galaxy S10 for transactions with Ethereum, Basic Attention Token (BAT), and Enjin Coin (ENJ). Enjin is also capable of sending and receiving all Ethereum-based (ERC-20) tokens and Ethereum-based game assets (ERC-1155), such as CryptoKitties.

If Enjin is indeed installed on the Galaxy S10 as its default wallet, Enjin could gain access to the 31 million people who are expected to become owners of the new phone.

“You now have one of the largest tech companies in the world working to accommodate cryptocurrency.”

While it’s true that cryptocurrency wallets have become increasingly accessible and user-friendly over the last several years, Samsung’s public embrace of cryptocurrency is particularly significant because its phones are used every day.

In other words, anyone who has a Galaxy S10 would automatically have access to a secure hardware wallet that they carry with them at all times; they wouldn’t have to make the extra effort and spend the extra cash associated with purchasing a device specifically for cryptocurrency storage.

Indeed, “not so many people are deeply in tech today, but Samsung phones are used globally every day,” read a report from CoinSpeaker.

eToro analyst Mati Greenspan also sees the potential boost that cryptocurrency adoption will receive from the creation of the integrated hardware wallet. “The new added feature built into Samsung’s S10 is certainly noteworthy and is yet another sign that more people and companies are taking crypto and blockchain seriously,” he said.

Kyle Asman, partner at BX3 capital, shared Greenspan’s sentiments. “This is definitely a big step in the right direction for mainstream adoption,” he told Finance Magnates. “You now have one of the largest tech companies in the world working to accommodate cryptocurrency.”

Indeed, “Samsung is one of the Mobile giants with 893 million active devices all over the world and a market share of 27%, even beating Apple,” said Nuno Correia, CEO of UTRUST, to Finance Magnates. “It not only validates the beliefs in blockchain technology but as well opens the door to new users that might have to see the technology as not legit and now see it as validated.”

Are Other Major Tech Companies Likely to Follow Suit?

Will other major smartphone manufacturers follow suit? Opinions within the industry are mixed. Some say that Samsung’s public embrace of cryptocurrency is a nothing more than a PR stunt, but others see signs of the future.

For Nuno Correia, “it’s not a question of ‘will’ but ‘when,’” adding that he believes that Apple is likely to start offering cryptocurrency storage products as well. “We will see huge competition in the next years between mobile tech providers in regards to blockchain.”

Anatoliy Knyazev, Executive Director and Co-founder of investment firm EXANTE, disagrees. “I doubt more manufacturers will follow suit, unless Google decides to support this feature natively in the Android OS in the next release,” he told Finance Magnates. “I would give even fewer chances of Apple playing with [the idea].”

The Race to Capture the Crypto Market Has Already Begun

However, it’s possible that crypto-integrated devices will continue to gain popularity with or without the immediate participation of the tech world’s most important players.

Indeed, founder of Trezor, Head of Strategy at Casa, and cryptocurrency security expert Alena Vranova told Finance Magnates in an exclusive interview that it’s likely that cryptocurrency wallet-integrated products such as smartphones, laptops, and watches are will appear on the market with greater frequency over the next several years and that much of the push will come from cryptocurrency wallet manufacturers themselves.

“We will probably see more attempts to go to bluetooth…more hardware wallets embedded into other devices,” she explained.

To be sure, there has been plenty of excitement around these phones. The Finney ICO raised $100 million in under 24  hours.

However, it may be so that Samsung’s new crypto-integrated smartphone could knock smaller players straight out of the water. All three products are available for around the same price – somewhere between $750 and $1000 – and the S10 is by far the most reputable and the most widely available.

Michael Ou, CEO of CoolBitX, told Finance Magnates that smaller players might have to lower their prices if they want to be able to compete with major manufacturers. “Unfortunately, the high price point of crypto phones (such as the HTC Exodus 1) serves as an additional barrier to entry, as those unfamiliar with the industry are unlikely to purchase these types of devices,” he explained.

In any case, the race to corner the crypto market is on and Samsung may just be the winner.