The days of the ICO craze are over. For a brief moment in history, the new fundraising method was pulling in unprecedented amounts of capital; hundreds of millions–even billions of dollars went into funding thousands of new projects, some of which had absolutely no technical substance.

Things have changed. A year of scams, failed projects, and hacks has whittled down the investor pool into a group that is much more skeptical, and much more aware of what can go wrong.

Still, there have been some efforts to pump new life into the token sale market. But what happens when those efforts go south?

US-based cryptocurrency exchange Bittrex made headlines earlier this month that it was canceling a so-called “initial exchange offering” (IEO) less than 24 hours before the offering was set to begin. The IEO was associated with RAID, a blockchain gaming company with headquarters in South Korea.

The “IEO”: An Attempt to Rebrand ICOs?

Bittrex originally announced that it would be launching the IEO–the world’s ‘first-ever’–on March 11. The IEO was to be conducted similarly to an ICO (initial coin offering), but with Bittrex as the hosting platform. Allegedly, the fact that IEOs are held on established cryptocurrency exchanges could reduce the risk associated with buying into an ICO that is hosted by the project itself. 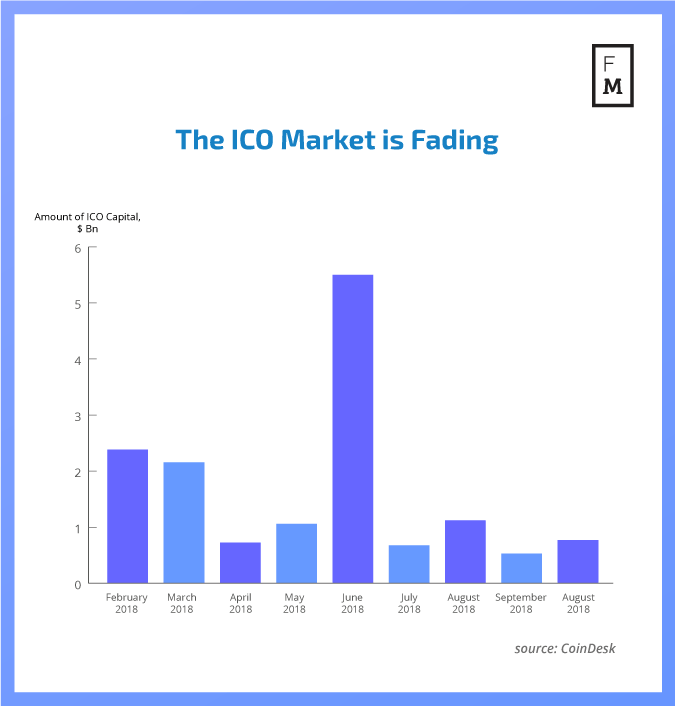 “In the early ICO days, sellers simply built a website, posted a wallet address and started the countdown clock. It didn’t take long for hackers to exploit vulnerabilities,” wrote Jeff Koyen, publisher of token sale evaluation site ICO Ranker, in an email to Finance Magnates. “Then along came vendors like ICOBox, offering turnkey token sale services, including end-to-end security. But even this was never foolproof. Hackers gonna hack.”

On the other hand, By hosting a token sale on a major exchange, you’re outsourcing security to someone who’s probably much better at it,” Koyen continued.

“If You Broke Into Fort Knox, Would You Steal the TVs?”

“Think of it this way — Binance and Bittrex, to name two, already hold untold fortunes in crypto. If hackers can compromise the exchange wallets or its user accounts, they’re going siphon off billions in BTC before worrying about a couple million from an IEO. If you could break into Fort Knox, would you steal the TVs?”

“IEOs aren’t bulletproof. Nothing’s bulletproof in crypto. Exchanges get hacked, and centralized token sales are anathema to crypto OGs for good reason. As the saying goes — not your keys, not your bitcoin. But I still think IEOs can play an important role in crypto’s wider adoption and the reinvigoration of public-facing token sales.”

And indeed, the idea that this re-branding of a traditional token sale could stir some interest (and some capital) in a stagnant token sale market has been circulating around the cryptosphere.

“Speaking as someone who misses the wild ICOs days, I like IEOs. They have a bright, interesting and quite possibly very brief future,” Koyen quipped.

Indeed, the IEO concept could be nothing more than a fleeting moment in token sale history. “That’s how crypto works. It’s a Gibsonian experiment in accelerated Darwinism — forever adapting, often on-the-fly, to remain defiantly independent of federal regulators and other central agencies. Of course, skeptics decry the centralized aspects of IEOs.”

“Still, I get more excited about IEOs than STOs, which have become boring vehicles for VCs and other unimaginative investors.”

Even if the IEO concept’s fresh take on token sales does provide some new and attractive features, the RAID debacle may have cast a long shadow over the practice. Here’s what happened.

For a Brief, Shining Moment, Everything Was OK

Following Bittrex’ announcement of the IEO, RAID delivered 17 billion XRD (its native token) to Bittrex with the goal of raising $5.95 million. A single XRD token was to be sold for 10 Satoshis (a ‘Satoshi’ is one hundred millionth of a single bitcoin); the minimum buy-in for the sale was the equivalent of $10, and the maximum was $20,000.

The sale was all set to begin on March 15, 2019, at 10.00 KST time. Bittrex’ CEO, Bill Shihara, expressed his enthusiasm for the sale: “We are committed to increasing adoption and moving the blockchain revolution forward. The ability for projects like RAID to innovate, advance, and promote the gaming industry on our platform is a game changer for all involved and not just for RAID and our team,” he said in an official statement.

The arrangement was set to benefit Bittrex as well–in order to participate in the IEO, token buyers were required to open a Bittrex account themselves.

After all of the advertisements had been sent out, official statements praising the collaboration had been made, and the tokens were set to sell, Bittrex abruptly canceled the RAID IEO.

The cancellation reportedly came as a last-minute response to the termination of a partnership between RAID and OP.GG, a 32-million-user company started by Raid’s alleged co-founder, Cheonwoo Park.

As soon as we were notified of the change in partnership, we made a decision. https://t.co/2pbaZ2X9Dp

Before the cancellation was publicly acknowledged by RAID, OP.GG posted a statement to distance itself from the project.

“OP.GG has no affiliation with RAID Coin, and there is no economic and technical cooperation with RAID Coin,” the post reads. “In addition OP.GG has no intention of developing any blockchain related business utilizing RIOT GAMES data. OP.GG will take all possible legal measures against individuals or organizations disseminating false facts related to this.”

[Urgent Announcement]
We have already made several announcements about this issue, yet we are making another announcement as we found that such misleading information is still circulating through various channels.

Then, a similar post appeared on RAID’s website: “The partnership between RAID and OP.GG has been terminated due to the circumstances of the partner company. OP.GG will also announce regarding this matter. We believe this will have a significant impact on investors’ decision-making. Therefore, after discussing with Bittrex, we will be able to inform you on the details before IEO begins.”

Other Details Don’t Add Up

But there were other suspicious details as well. Before the cancellation was announced, crypto news outlet CoinSpeaker launched an investigation into RAID. The journalistic investigation seems to have come as a response to the project’s decision to change its token ticker symbol from “XRD” into “RAID” shortly before the IEO was set to begin.

Dear RAID Supporters!
Team RAID has decided to make a change to RAID token symbol from the current XRD to RAID in ponder to a more intuitive token symbol and project relativity and to minimize confusion from other projects.
Current Symbol : RAID (XRD)
New Symbol : RAID (RAID)

The publication said that although the legal announcement by Bittrex said that XRD tokens would be issued by a company called “ONERAID PTE. LTD”, no company was registered with that name in Singapore–in fact, there were virtually no traces of the company besides its website: no associated LinkedIn accounts, no nothing.

Further, all 6 of the employees listed on Raid’s website were from South Korea. “Do they think it’s legit that non-existent Singapore company already sells tokens and raises funds using Singapore as a brand and yet there is no evidence that a single Singaporean is employed in a non-existent Singapore entity?”, the CoinSpeaker report asked.

Bittrex: “When we become aware of significant events, we respond quickly to protect our users.”

Bittrex was quick to explain the cancellation as the best possible course of action given the circumstances.

“Trust and integrity are the most valuable assets of Bittrex International,” the exchange wrote in an official statement regarding the cancellation. “A few hours ago, OP.GG terminated its strategic partnership with RAID, which was a vital part of the RAID project. When Bittrex International became aware of this significant event, we did not feel that it was in the best interest of our customers to move forward with the IEO.”

“One of the hardest challenges we face in advancing blockchain adoption is to avoid the rampant fear, uncertainty, and doubt that is everywhere in this industry,” the statement continued. “When we become aware of significant events, we respond quickly to protect our users.”

Bittrex also posted a statement explaining its selection process for the IEO projects it will host.

Included in the list of evaluation criteria were token sale economics, use of proceeds, timeline and roadmap, strategic partnership review, and communications review. The exchange did not include criteria to address the legal status of the companies creating the tokens and has not openly addressed concerns that the company that allegedly developed and distributed the RAID token may not actually exist.

Koyen explained that in his opinion, Bittrex did the best that it could with the information that it had at hand. “I’m not sure Bittrex did anything wrong,” he said. Had the sale been held and RAID pulled an exit scam, that would’ve been disastrous”.

“Giving Bittrex the benefit of the doubt, my immediate reaction was relief that someone finally self-regulated. Crypto is still a very mercenary industry where scammers evolve more rapidly than the overseers. I have no doubt something fishy went down, but fishy shit goes down every day in crypto. At least this one sale was stopped in time.”

Further, Koyen believes that the exchange will “no doubt” attempt another IEO. “If the buyers keep coming, the exchanges will keep selling. It will be interesting to see how this new sale format evolves as exchanges balance the need to protect themselves, protect investors but still make money.”

What’s Next for RAID?

Around the time of the debacle, RAID did make an effort to let its supporters know that its partnership with OP.GG had ended, and that the IEO had been canceled.

However, the project’s social media has stayed silent in the time since the cancellation of the IEO. Additionally, the desktop version of the site has gone offline, replaced by the following message: 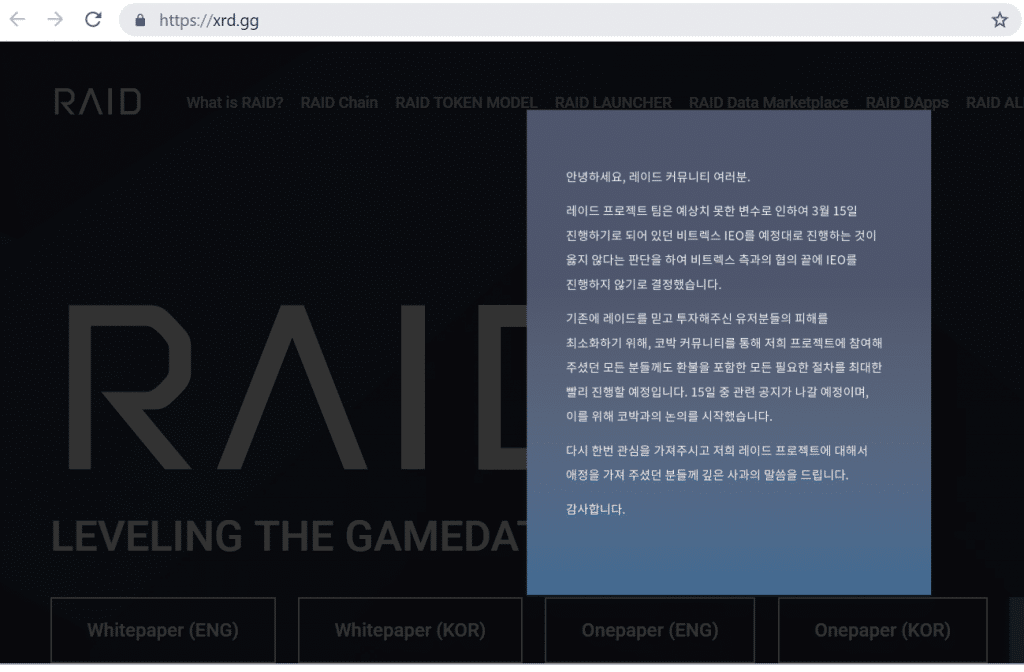 (Translated quote (Google Translate): “The RAID project team decided that it was not right to proceed with the Bittrex IEO due to unexpected variables, and decided not to proceed with the IEO after consulting with BitRex. In order to minimize the damage of users who have invested in RAID in the past, we will carry out all necessary procedures as soon as possible for all those who participated in our project. A related announcement will be made on the 15th. I apologize to all those who have once again expressed an interest and have expressed love for our project. Thank you.”)

Indeed, to its credit, RAID does not seem to have pulled a complete exit scam–at least, not yet.