US Crypto Regulations–Slow, but Gaining Speed

The United States government has treated cryptocurrencies with a rather slow and steady approach in comparison with some of the world’s other major powers – China, for example, set off a sweeping set of bans on cryptocurrency last September that eventually resulted in all domestic Chinese exchanges being forced to shut down their operations.

This has resulted in an environment where cryptocurrencies and blockchain-based startups can establish themselves with some assurance that business will not be interrupted by the swift, heavy-handed actions of a government acting rashly.

At the same time, the United States’ lack of a uniform regulatory framework has not made the country as well-suited as, say, Switzerland, which has become a global hub for blockchain technology, as well as the home of the Crypto Valley Association. Without a solid set of rules in place, some blockchain startups may be hesitant to put roots down—a lack of regulation could mean a big change in taxation in the future.

The Trump Administration on Blockchain Technology

By its very nature, cryptocurrency and the various kinds of distributed ledger technology that power it was intended to place more economic power in the hands of the individual. Blockchain allows for regular people to be in complete control of their funds without relying on a third-party institution (ie banks and credit card companies).

In late September of 2017, Margie Graves, acting Federal Chief Officer of the US Office of Management and Budget, told of the federal government’s interest in AI and blockchain that could be beneficial for the federal government. “These kinds of technologies are always something that we should explore. I don’t want my customers to be the last to know, or to be the last to be able to take advantage of some of these,” said Graves at the Data Transparency 2017 conference.

According to CoinTelegraph, Graves went on to say that the government is particularly interested in the aspects of blockchain that could help the government reduce waste, improve cybersecurity, and reduce incidents of money laundering and fraud.

Crypto and the SEC

Following the infamous hack of the DAO, the SEC released an investigative report in mid-July of 2017 that officially declared tokens purchased during ICOs as securities. Previously, the SEC had not treated ICO tokens as such, with some exemption based on the circumstance and function of the token.

In early December, the SEC took legal action against a company holding a “scam” ICO for the first time when it filed charges against PlexCoin. Fortune reported that the PlexCoin ICO was “a blatant ripoff” that promised 13-fold returns for investors within a single month. Prior to the charges, the ICO had raised $15 million.

Following the Plexcoin case, the SEC released an additional statement in mid-December of 2017. In the statement, SEC chairman Jay Clayton warned investors of the risks involved in ICO participation, as well as a set of guidelines that were intended to help investors identify possible illegitimate behavior in an ICO:

“If an opportunity sounds too good to be true, or if you are pressured to act quickly, please exercise extreme caution and be aware of the risk that your investment may be lost.”

Additionally, the statement acknowledged that “there is substantially less investor protection than in our traditional securities markets, with correspondingly greater opportunities for fraud and manipulation.”

The mid-December statement came just hours after the SEC froze the ICO of a restaurant review startup called ‘Munchee’. The SEC made the decision based on the fact that Munchee cryptocoins had been sold as utility tokens when they should have been legally registered with the SEC as securities.

CNBC reported that this decision was particularly significant because “it showed SEC would step in to address ICOs for registration violations even if there were no claims of fraud.”

According to Former Chairman, the SEC’s Crackdown Will Continue

On December 21, 2017, former SEC Chairman Harvey Pitt said on CNBC’s fast money that a serious crackdown on crypto by the SEC was imminent: ”We’re in line for some serious regulatory responses to all of this and that will be forthcoming after the first of the year.”

Pitt also said that he viewed the practice of insider trading in ICOs as a real threat: “When people have advanced knowledge of the offerings of these interests and take advantage of the offering long before it occurs.”

Pitt’s statements came in the wake of the SEC’s decision to suspend the trading of shares in The Crypto Co., which had risen north by an eye-popping 2,700% in under a month. The SEC cited suspicion of market manipulations as the cause for the suspension.

Crypto, Anonymity, and Cyber Crime in the US

Indeed, the decentralized and anonymous nature of cryptocurrencies has long been regarded as a good thing by crypto users who wish to remain as anonymous and tax-free as possible. However, a few large-scale incidents have made plain the US government’s seemingly limited ability to protect crypto users from theft and fraud, a situation that is only exacerbated by a lack of solid, uniform legal framework.

Identifying and punishing cyber criminals has proven to be an extremely difficult and often fruitless endeavor for most governments around the world within and without the cryptosphere.

Within the last year alone, $50 million worth of ETH were stolen in the DAO hack, and $31 million of Tether dollars were stolen in a Bitfinex hack–not to mention a number of smaller-scale hacks and scams that left individual investors with empty pockets. How many people have been indicted or prosecuted? Exactly none.

Because the United States Federal Government has not yet put in place any sweeping set of laws that would regulate the classification and usage of cryptocurrency in the country, states have been left to make their own decisions regarding the regulation of crypto. This has resulted in a veritable patchwork of crypto-ambivalent, crypto-friendly, crypto-hostile, and crypto-indifferent.

The vast majority of the states in the Union have not passed any specific laws regarding the usage of cryptocurrency; some have taken steps to embrace blockchain technology, and others have made moves to deter residents from engaging with cryptocurrency.

In July of 2017, the Uniform Law Commission, a non-profit association comprised of roughly 350 legal professionals and commissioners, met to draft the “Uniform Regulation of Virtual Currency Businesses Act” The associated, which was founded in 1892, is seeking to put an end to the ambiguity surrounding the legal classification and regulation of cryptocurrencies.

In an article for Coindesk, Coin Center director of research Peter Van Valkenburgh wrote that “this new legislation would be a major improvement” for states with “badly drafted regulations (like the New York ‘BitLicense’)”. At the very least, the regulations would also provide some groundwork for states who have no legislation on cryptocurrency. 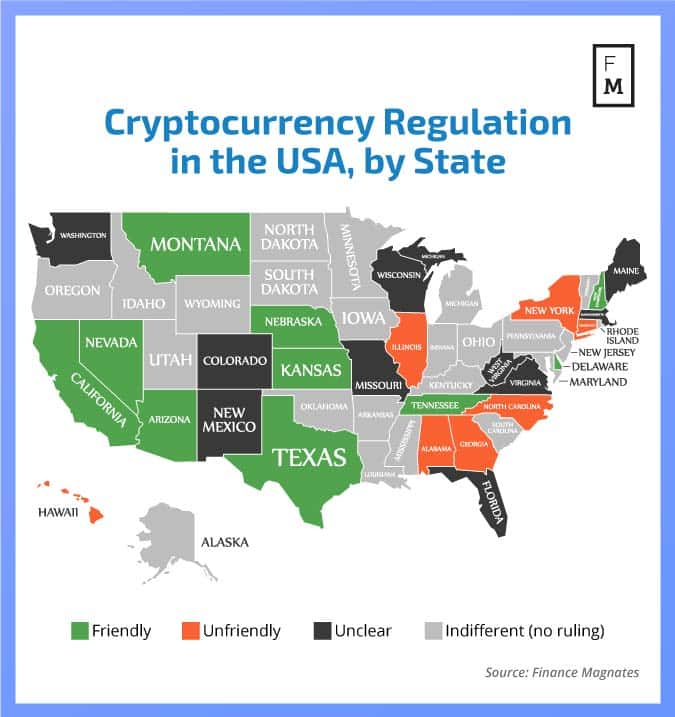