These discussions and efforts seem to have been effective, at least on the level of awareness – the New York Times covered the culture of women in the crypto industry in a piece entitled “Women in Cryptocurrencies Push Back Against ‘Blockchain Bros’” this February.

As important as it is to see high-powered women as executives in the crypto space, it is equally – if not more – important to examine how many women are actually investing in and using cryptocurrencies on a practical level. The Times report estimated that women comprise 4-6 percent of investors in the blockchain space; in a graph entitled “Bitcoin Community Engagement by Gender Summary.” Data collected by CoinDance shows that there is still a major discrepancy between the numbers of men and women in the crypto space. 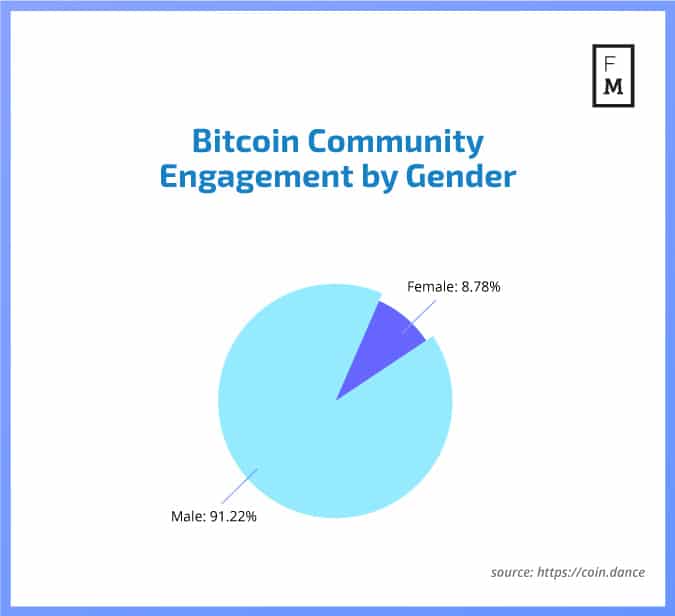 Female Crypto Traders are Good for the Numbers

This is a problem for several reasons. From a humanitarian standpoint, women deserve the financial empowerment that cryptocurrency brings just as much as men do. If you’re not interested in the feminist point of view, it’s simply a numbers game. Femme-identified people comprise approximately 50 percent of the population. When Bitcoin’s market cap grows, the value of each individual Bitcoin grows.

Therefore, adding more traders of any demographic to the market increases the value of everyone’s portfolio. (In other words, even if you think that the gender imbalance isn’t important, it’s still in your best interest as a crypto trader to find a way to invite more women into the cryptocurrency markets as traders.)

Additionally, studies about the way that most women behave as investors in any market suggest that an influx of female crypto traders could mean some sort of stabilization of the markets. One 2017 study by Fidelity Investments revealed that women are more likely to hold onto an asset for longer periods of time on average, whereas their male counterparts are more likely to make more trades.

Women, consider crypto. Otherwise the men are going to get all the wealth, again.

Not only does this contribute to valuation stabilization, but the reduced amount of fees associated with making fewer overall trades could also contribute to greater profitability overall. In fact, the same study found that on average, female investors were 0.4 percent more profitable annually than male investors. Women also saved 0.4 percent more.

“If you want to invest like a wonder woman, that means shifting to a long-term focus, saving more up front and giving up on trying to time the market with brilliant trades,” said a Reuter’s report on the findings.

Behavioral Differences are Nurture, Not Nature

It’s important to note that there is nothing inherent about female biology that makes female traders behave differently from traders of other genders. Rather, behavioral differences are a result of cultural conditioning.

Indeed, in a special report for Finance Magnates entitled “In the Trading Ring–Battle of the Genders,” Director of Parq Recruitment wrote that Gemma Andrews that “I do not think [that women’s] aspirations differ from that of men but I do think that their approaches to succeeding are different because they have to be.” Because women are expected to be the primary caregivers in most global societies, they are raised accordingly.

It is also important to remember that the results of this study are not indicative of how all female traders behave within the space. Indeed, some traders are more averse to risk regardless of their gender. Stephen Simonis Senior wrote in a report for Finance Magnates that “traders, male or female, trade in different styles, approaches, and risks. Over the years I’ve seen traders with small positions with consistent profits and some with consistent losses. Large risk takers show big profit and also lose big money. Styles differ, but the one thing that remains constant is that traders are a special breed.”

Why Aren’t There More Women Investors? 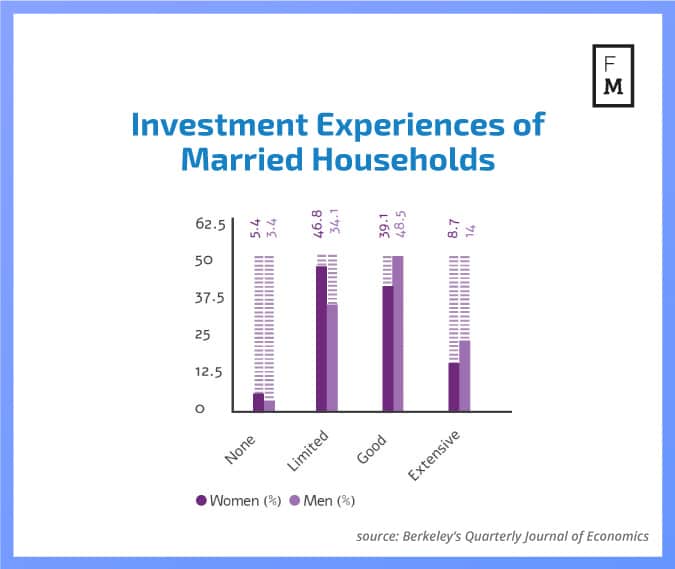 “Stereotypically, men would be the breadwinners of the family, and that, more often than not, meant handling the household finances and safeguarding the financial future of the family. Consequently, the finance industry spoke directly to men, and women took a back seat,” wrote Georgie Killik, Head of Innovation at Killik & Co. investment house in a report by Sheer Luxe.

Killik went on to say that because this domestic set-up is no longer “the norm,” women are entering financial spheres with increasing frequency. Gaining more women as users is an important part of growing the cryptocurrency markets, but some argue that the industry is too new to target any “niche” demographic as a user base.

“When it comes to users, an important thing is that many companies are building blockchain-based solutions that aim for mass adoption, [and starting] with crypto investors as this is naturally their first user base,” wrote Maike Gericke, Founder of Scrypt.Media, to Finance Magnates. “Most companies with a clear future vision are including female users in their marketing roadmap – but normally not as a first main target audience.”

Crypto Has Long Been Associated with Hostility Towards Females

Inviting more women as traders into the cryptocurrency markets means understanding why they weren’t there as “crypto investors” in the first place. Of course, it’s already been established that women are subtly discouraged from taking part in financial and technological fields in most societies. Money, math, and computers are “for boys.”

Beyond that, though, women were not exactly “welcome” in many of the communities that nurtured and used cryptocurrencies before the crypto boom in 2017.

This may be in part due to the fact that some of the communities that used cryptocurrency most prevalently in its early days were hostile towards women.

The Southern Poverty Law Center published a report detailing connections between far-right extremist groups and Bitcoin transactions. Bitcoin was (and is) closely associated with sites like 4Chan (a forum website often associate with the alt-right) and The Daily Stormer (a now-defunct far-right extremist newspaper.)

Self-appointed white nationalist speaker head Richard Spencer went so far as to say that Bitcoin was the “official currency” of the alt-right. Spencer has also publicly expressed doubts about whether or not women should have the right to vote.

Cryptopia CEO Alan Booth told Finance Magnates that his company is making some specific efforts to invite more women on as employees. Booth wrote that although“Cryptopia currently sponsors the local University’s Women in Technology Society and is invested in spending time to assist females to navigate this often challenging employment environment, we are the first to admit that this isn’t enough.”

“As an industry, we should all commit to spend more time, resources and money to make a more significant impact,” he said. “We could structure job descriptions to appeal to a more diverse gender pool and engage retention strategies that specifically target female employees.” These steps could include providing benefits that have included measures for maternity leave.

Booth also identified another trend in the cryptocurrency industry and the tech industries in general. The fact that so much awareness has been raised around the gender imbalance means that “the small number of female graduates [in the tech field] are often aggressively pursued by the larger corporate tech firms who have more established diversity mandates and they are in high demand.”

“The reality is that on average, our experience is that one in ten or twenty applicants are female and we believe the key to change is changing this applicant ratio starts with education,” he said.

Small and Mighty: Despite Being Low in Number, There are Many Talented Professionals in the Industry Who Also Happen to Be Female

There are also a number of support groups and events that have been created for women in the cryptocurrency industry, including the Women in Blockchain Summit.

Voneus’ Erica Stanford told Finance Magnates that, “this is the technology of the future designed to be used by all.”

“Having a wider balance of people and perspectives in general” will only benefit the industry.