Officially, Google doesn’t have any special policy regarding cryptocurrencies and ICOs. But worried voices coming from the crypto and marketing industry paint a very different, darker picture.

Google is obviously much more than just a search engine or even an all-included internet service. If the internet is a global village, then Google is its chief. And now the chief seems to be going after one of the most prominent and fast-growing industries.

After technology titan Facebook banned crypto ads, Google is apparently following a similar path. Advertisers using Google Ads are reporting difficulty in advertising cryptocurrency and blockchain-oriented products. In other cases, channels showcasing crypto content are reporting that their channels are being banned from YouTube.

Google AdWords hasn’t published any official changes to its policy, or made any official statement. However, myriad Google AdWords clients, such as firms doing direct advertising, marketing firms and PR agencies, report a significant drop in the performance of Google advertising for customers offering cryptocurrency services. In some cases, the advertisers even find their adverts rejected, or their accounts suspended.

This change in numbers coincided with cryptocurrency-related adverts beginning to be defined as “limited” upon submission. 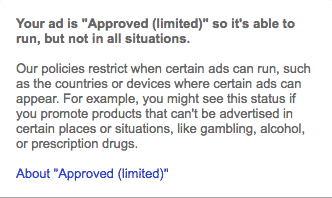 Judging from the list of practices mentioned in Google’s official policy that merit defining an advertiser as limited, the closest definition to cryptocurrency would be gambling. Could this be Google’s interpretation of the crypto space?

In another case, Finnish blockchain startup Lamium, that tried to advertise its platform on Google a month ago, saw the termination of not only its advert, but also of its Google Ads account. “So I understand why the ad was suspended, but why was the account itself suspended?” it wrote on the Google AdWords support page. A similar case happened to an algo-trading platform called Crypto Bot Settings, that also saw its account suspended. And the list goes on.

While different advertisers got different reasoning from Google AdWords support for the suspension of their accounts, there is a consensus on the official forum as to the common denominator – all blocked ads and accounts come from the crypto industry.

We reached out to Google and received an answer that denies any changes to the official policy:

But this special approach to crypto doesn’t seem to be limited to the advertisement realm. Some crypto Vloggers and shows reported that their channels being restricted or even taken down altogether. The restrictions include demonetizing, cancelling the Live Video feature, and more.

The protest hashtag #YouTubePurge has been trending for a while on Twitter. But until now it was used mostly by political thought leaders from the right-hand side of the isle. Now, we are starting to see it being used by cryptocurrency-oriented content. In one case, Bad Crypto, one of the most viewed / listened to crypto podcasts, has been unavailable on Youtube from this week.

Hmm I wonder if Facebook & Google are trying to ban crypto leaders in addition to ads. Love your podcasts

So, why is all that happening? There are a few theories, some overlap and some are contradictory. One answer is that this phenomenon is an overreach of Google’s policy against fake news, malicious ads and crypto mining scams. A similar move was announced this week by yet another technology leader, Twitter. This means that the aforementioned advertisers probably did something wrong by mentioning a word or a sequence that targeted Google’s algorithms.

Another interpretation, which is the most common, talks about Google being extremely meticulous with regard to ads coming from crypto advertisers. Google has a very elaborate policy on how to advertise on its platform, especially when it comes to firms offering financial services. Is seems that when it comes to crypto firms, its approach is much stricter and less forgiving than it is for other industries.

Prospects of a total ban

Another explanation that we have been hearing from our sources, and that is being raised in professional forums as well, is that we are seeing an intentional and gradual effort to restrict crypto ads or to even block them altogether. Moreover, a source with close connections to Google claimed that the technology behemoth is mulling an official ban in March.

The notion of banning crypto ads from Google was raised a month ago by a Canadian regulator. Jason Roy, a senior investigator at the Manitoba Securities Commission in Canada, openly turned to Google and asked it to follow Facebook’s lead. “We’re very pleased with Facebook’s decision. My hope is that Google will enact a similar policy, where they specifically name products like binary options, ICOs and cryptocurrencies,” said Roy.

Back then, the request was declined. Google explained that while it already bans misleading and fraudulent ads, it doesn’t want to prevent the entire industry from advertising on its platform. Right now it seems that it might have changed its mind.

Nicc Lewis, marketing expert and founder of Expozive, says that such a ban is a possibility. “I know that there is a lot of pressure on Google, coming from the US and Canadian regulators. It’s possible that if the pressure is strong enough, Google might decide to act globally. It seems it’s ICOs that will be affected first.”

This is well-established ground for Google. I do not think this is sinister, just them imposing their world-view by editing search results. They make no promises to anyone.
They would alienate too many folks if they were trying to push their own results to the top.

I would like to see a break down by country of the declining hourly impressions example. No doubt Google is being more stringent, but could it be that certain country’s bans are a factor in the decline? e.g., South Korea?

This is exactly what we need to finally get the ads market disrupted by crypto!! For me these are excellent news ! This is the only way to push the Crypto-(r)evolution ! there are already companies willing to pay people watching ads without middleman, companies disrupting youtube, where people uploading their video’s are payed for watching their contribution (Experty), we have also Nebulas disrupting Google’s imperium… So who still needs this dinosaurs in 5 years ??? The Crypto revolution is unstoppable and the dinosaurs are afraid of it !!! Now we really have a chance to THRIVE, I hope the… Read more »

I moderate on Google+ and can tell you there is a ton of fraud regarding crypto being spun out from places like YouTube and scam ICo’s using adwords on top of it. We banned and reported over 2,500 accounts on G+ over the last month for posting junk ads related to crypto, including a lot of fake ICO scams. A lot of this deceptive content was coming from youtube. Most of the accounts who were posting youtube videos were pushing frauds related to fake ICO’s, not something we’re going to tolerate. Others were using youtube solely as a means to… Read more »

Google is making amends after allowing binary operators to hijack the search engine where the adware injectors associated currency options word with binary options.
Looks like it is beyong repair now and very difficult to do any reasearch an currency options.
Google avarice for ad revenue caused untold financial hardships to investors who went for binary options thinking they were trading a financial instrument. Strongely, no classsuit has been filed again Google for giving free run to scamsters.