An exclusive source has confirmed to Finance Magnates that beleaguered social media giant Facebook is diversifying its product line with a cryptocurrency of its own – Facebook Coin (FBC). Users will have to register to use the coin, but Facebook will guarantee that wallets and transactions will be completely anonymous.

The development has not been officially announced, but reportedly the coin is to be launched on the Ethereum blockchain via an ICO within the next two weeks. Given the size and reach of Facebook, it seems safe to assume that the ICO will rival the 1.2 billion dollars that Telegram raised in its own funding round.

Facebook has been all over the news lately for all the wrong reasons. It recently came to light that the company sold the personal information of more than 50 million of its users to a political data analysis firm called Cambridge Analytica. Cambridge Analytica illegally used that data to influence the public in the buildup to the Brexit referendum in the UK and in the last US presidential election.

After the scandal become public, Facebook CEO Mark Zuckerberg sent this statement to major newspapers in both countries:

“You may have heard about a quiz app built by a university researcher that leaked Facebook data of millions of people in 2014. This was a breach of trust, and I’m sorry we didn’t do more at the time. We’re now taking steps to make sure this doesn’t happen again….Thank you for believing in this community. I promise to do better for you.”

Unfortunately for Zuckerberg, belief in the community is collapsing. Millions of users have closed their profiles in the wake of the scandal, and the market capitalisation of Facebook has crashed from 538 to 464 billion dollars.

But what will be of more concern to Facebook is the financial penalty that it will have to pay. In 2011 Facebook signed a consent decree with the Federal Trade Commission following allegations that it failed to keep to its promises regarding the privacy of its users. The most recent breach has been found to be a violation of this agreement, and the penalty under US law is 40,000 dollars per violation. As the data of 50 million people was inappropriately used, the total fine will run into the trillions of dollars.

It seems that Facebook’s days as a social media platform may be numbered, which is why the board of the company has reportedly decided to branch out. Rumours are flying on Reddit: 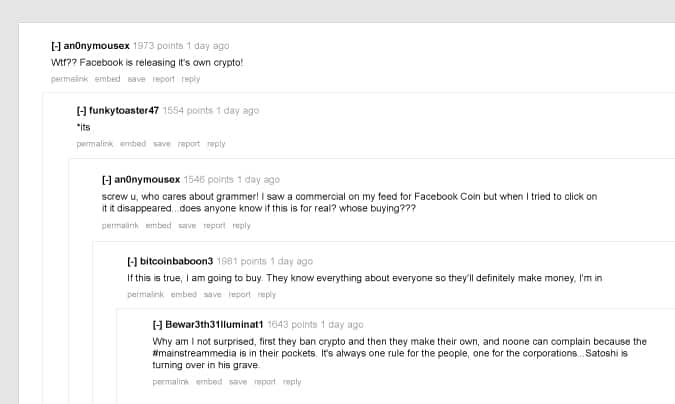 According to our source, the technical details are still being worked out but it can be confirmed that FBC will be an anonymity-based coin along the lines of Monero. In order to hold a coin, users will have to supply data such as name, address, phone number, mother’s maiden name and name of first pet. This is for security reasons; a privacy clause written into the smart contract will ensure that all transactions are entirely anonymous and completely untraceable.

Interestingly, our source told us that Facebook will be advertising the ICO on users’ Facebook feeds. This is interesting because the company recently banned all cryptocurrency advertising on its platform. At the time, its product managing director said that Facebook wanted to avoid “scams and deception”, and the decision to overlook this new rule for its own cryptocurrency has naturally raised eyebrows. However, our source denied that there is any contradiction in the policy:

“Facebook banned cryptocurrency advertising because too many of these companies were scams. This is completely different – Facebook’s ICO is a legitimate way to get more data, which is needed to power a groundbreaking new anonymous digital coin – it is not a scam, so there is not reason for it not to appear on the platform.”

We wish all of our readers a happy April Fool’s Day.

Is this a prank?

With all the fake news happening, this one actually seemed plausible. Especially considering that if Facebook launched its own crypto coin that it would likely gain instant popularity and trust from its existing userbase.