The price of ETH has not been spared amidst the first major crypto market downturn in weeks. As of press time, ETH had fallen nearly 20 percent. Mirroring moves by Bitcoin, ETH had actually fallen even further at one point earlier in the day but was showing some signs of recovery.

Similar to the BTC price dip, the drop in the price of ETH seems to have been expected for quite some time. After all, rallies in both coins have been so powerful for such a long time that both prices seemed to reach something of a fever pitch. Now, it seems that ETH is coming back to reality. Although, at press time, it appeared that the drop was showing signs of slowing.

Still, the drop may not be over yet.

What caused the dip? While the BTC rally may have been partially responsible for the ETH rally (just as the BTC crash may also be part of the reason that ETH is down), it is not all about Bitcoin. 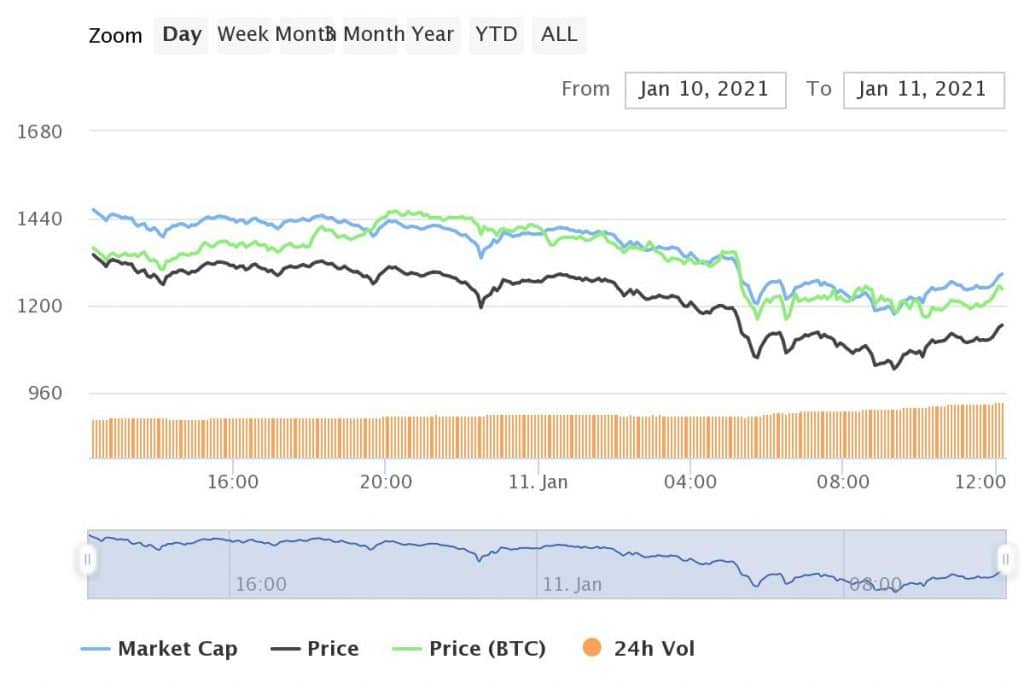 In fact, a number of analysts have been predicting that Ethereum’s high transaction fees and slow transaction speeds would catch up to the network, and the currency, eventually.

Jamie Finn, President & Co-Founder of Securitize, told Finance Magnates last week that while the network is getting more usage, “you will have many developers search for another chain since it’s getting too expensive to process a transaction.”

For example, “right now it costs $17.00 to process a transaction,” he said on Tuesday. “This is untenable for most people unless you are using it for large transactions. For example, if you want to generate yield, you would need to spend $17 to get into the ‘deal’.”

However, “most people are only deploying $100-$1000, which means the yield is negative for a long time,” he said. “As an example, if you were to invest 1 ETH into a UniSwap pool, you would be paying $75 in fees right now.”

Ethereum’s fees continued to rise along with the price over the weekend, finally topping out around $1350.

The Future of ETH

Like Bitcoin, a number of analysts and Ethereum enthusiasts believe that despite the recent drop, ETH is still on the way up: ‘buy the dip’ was a popular phrase on Twitter at press time.

After all, Ethereum is making progress toward change. Tim Sabanov, the Lead Technical Architect at Zumo, told Finance Magnates last week that the “first stage of Eth 2.0 went live in December, attracting validators wanting to participate in staking.”

Each of these validators needs “to deposit a minimum of 32 ETH to participate,” he explained. “That ETH is then locked until the release of Phase 2,” which will happen in 2022 at the earliest.

“Currently, there are already over two million of all available ETH locked” in the network, a figure that Sabanov said he expects “to steadily increase in the upcoming months.”

Share this article
Tags: ETH / Ether
Got a news tip? Let Us Know

The problem is that you are using a Yankistani format. 11/1/2021 to most of the normal world means eleventh of January 2021 … Yankistanis don’t live in a normal world ….