As Bitcoin continues to struggle to reach the levels that it captured earlier this year, the price of Ethereum has hit a new all-time high (ATH) again.

Indeed, on Thursday, February 4th, data from CoinMarketCap shows that the price of ETH hit $1,689.19. The price has since cooled to roughly $1657, but the asset’s gains overall are Since the beginning of 2021, ETH has continued to capture new ATHs on a near-weekly basis. In total, the price is up nearly 122% since the beginning of the year. 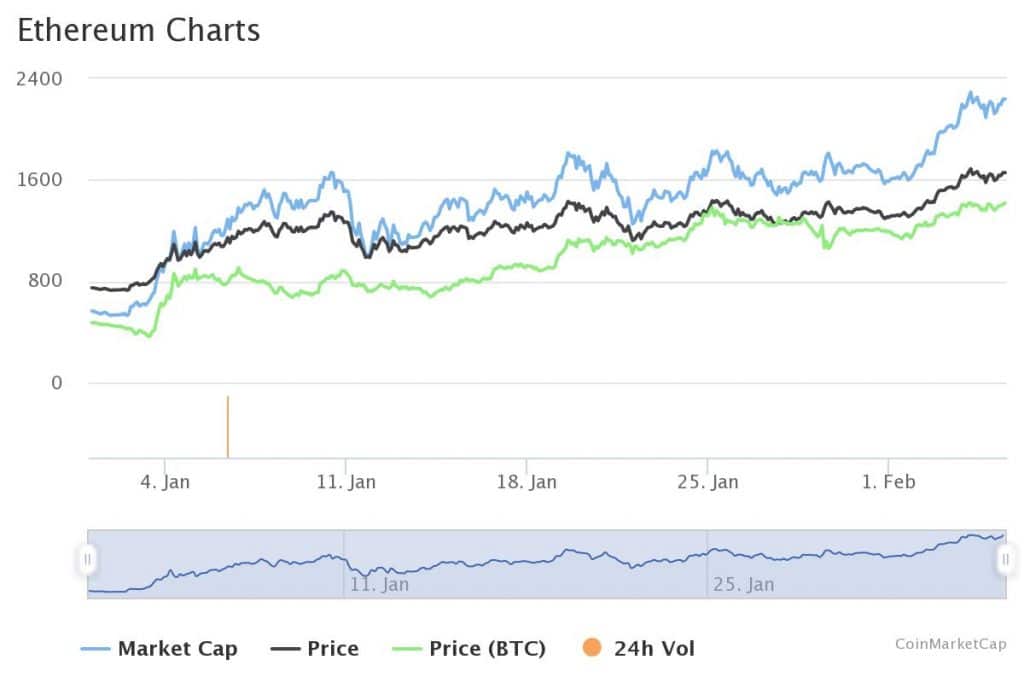 What Is Driving the Price of ETH Up?

Part of ETH’s recent rise may be connected to the WallStreetBets saga that has been playing out for the past two weeks.

Here is the story: several weeks ago, a group of rogue traders in the r/WallStreetBets (WSB) Reddit forum set out to send GameStop Inc (NYSE:GME) stock prices to the moon. They were successful: the price of GME is up more than 1100%. The move is now being called ‘The Big Short Squeeze’ as Wall Street hedge funds are being forced to take losses or try and out-hold the pumpers.

However, the WSB traders, realizing their power, have been targeting other assets besides GME. So far, the traders have targeted XRP and DogeCoin (DOGE). Additionally, a number of analysts have said that the restrictive actions by many traditional brokerages to stop GME trades have made the case for decentralized finance (DeFi) even stronger. As a result, the total market cap of all cryptocurrencies has risen past the $1 trillion mark.

Can we be sure that the WSB saga is connected to the ETH price rise? Perhaps: Shidan Gouran, Chief Executive of merchant banking advisory, Gulf Pearl, told Finance Magnates that he believes: “it does indeed have an effect on the price of ETH, along with other cryptos.”

“Those squeezes showed just how fragile and vulnerable traditional financial institutions are, which I believe caused a lot of folks to ‘jump ship’ from legacy financial instruments and choose cryptocurrencies such as ETH instead,” Gouran said.

The “WSB Squeeze Showed Everyone How Our Existing Financial System Is Actually Broken.”

However, Anton Altement, Chief Executive of Osom.Finance, said that he “[doesn’t] think the two are directly related.”

“At least, we haven’t observed much ETH-focused talk on the WSB group in Reddit, unlike DogeCoin (DOGE) and Stellar (XLM),” Altement explained, adding that “both of those have been ‘the talk of the town’” in the r/WallStreetBets subreddit.

“However, after Robinhood and several other retail stock trading apps started to halt trading in certain names (eg GME and AMC), the participants did turn to crypto in general,” he said. “As such ETH could have become one of the beneficiaries of this albeit not much more than the crypto market as a whole.”

Additionally, Tim Sabanov, the Lead Technical Architect at Zumo, told Finance Magnates that while the WSB saga may not have impacted ETH directly, the “WSB squeeze showed everyone how our existing financial system is actually broken.”

“This brought awareness to alternatives like cryptocurrencies and decentralized finance which can result in additional buying power and with that positive effect on the price.”

Doug Schwenk, Chief Executive of Digital Asset Research (DAR, also explained that at the very least, “there is certainly an overlap in the audience base” between crypto investors and WSB traders.

“Crypto markets have been more popular historically with a younger, retail market participant, and the WSB narrative has been around retail or individual traders going head-to-head with Wall St,” he said. “Of course, on social media sites and behind a screen name, it’s not always obvious who people are.”

Beyond the WSB drama of the past several weeks, general trends in crypto markets could also be affecting the price of ETH.

Gouran told Finance Magnates that part of ETH’s rise is circumstantial: “cryptos, in general, have been booming at a macro level in the past couple of months,” he said.

“The total market capitalization of cryptocurrencies is over USD $1.1 trillion today, double what it was just two months ago at about USD $570 billion on December 3rd, 2020,” Gouran said. “While much of this growth can be attributed to Bitcoin and its hype, I believe that interest has fuelled trading of other cryptos, as speculators try to find the ‘next Bitcoin’.”

In other words, because Bitcoin has become so expensive, traders are currently seeking out lower-price coins that could one day grow as large as (or larger than) Bitcoin has.

“Ethereum is at a natural advantage in the case of macro-level growth, as it is perhaps the best-known cryptocurrency after Bitcoin,” Gouran told Finance Magnates.

Moreover, Nikolay Zvezdin, Founder and Chief Executive of As.Exchange, explained that the drive to find the ‘new Bitcoin’ may be led by none other than Bitcoin investors themselves: “when Bitcoin reaches new all-time highs, capital starts moving into Ethereum,” he said.

“That is caused by the greater capital base available to investors from the BTC rise,” he said.

Therefore, when Bitcoin rallies, investors take profits and roll them into smaller-cap coins with more potential for growth. “For BTC to keep moving higher it requires greater new capital inflow for each unit of increase,” Zvezdin said, adding that “it’s easier to move from $10 to $15 per coin, than from $30,000 to $60,000, even though the return is the same (+50%).”

“ETH, being the cheaper option, starts absorbing some capital from BTC and moves to its own new ATHs.”

ETH Has Recently Been Less Volatile Than BTC, Which Could Make It Appealing for Certain Investors

Gouran added that ETH may have a powerful appeal to investors looking to roll some of their holdings out of Bitcoin because of its steadier performance this year: “Ethereum’s price fluctuations haven’t been quite as dramatic as Bitcoin’s. Thus, for investors who may have been skeptical about the volatility of Bitcoin, Ether could be regarded as a safer bet by comparison.”

Why is Ether’s price less volatile than Bitcoin’s? Gouran explained that the growing ecosystem of decentralized applications on the Ethereum network could have something to do with it: “the second factor is that Ethereum has the largest community of developers and the largest ecosystem of applications relating to any cryptocurrency, even larger than those of Bitcoin,” Gouran said.

“This is complemented by the recent surge of interest in the PolkaDot blockchain network, as many of those applications utilize the Ethereum blockchain in some way, [which has in turn] prompted a higher level of Ethereum usage.”

“Proof-of-Stake Will Drastically Change How Ethereum Is Used in the Real World.”

Additionally, Altement explained that: “the Ethereum staking program, which commenced in December, has locked up a substantial amount of ETH for two years” as the network prepares for the launch of Eth2.0, a software upgrade that will address some of the network’s scalability issues, which include slow transaction speeds and high transaction speeds.

Further, Eth2.0 will switch the Ethereum network from a Proof-of-Work algorithm to a Proof-of-Stake algorithm, which will effectively incentivize ETH hodlers to deposit large amounts of ETH tokens into smart contracts on the network for extended periods of time.

Therefore, the amount of ETH that is currently staked in the network, in addition to the amount that will be staked after Eth2.0 is launched, will effectively “reduce the [ETH] supply causing supply-demand equilibrium to edge higher,” Altement explained.

“The amount of transactions processed per second should increase, and thus, transaction fees should go down. Merely owning Ethereum and staking them will be a new source of passive income for investors.”

What Is Next for ETH?

Therefore, ETH may be well-set up for the long term. However, in the short term, can ETH simply continue to reach a new ATH every few weeks? The answer is very likely “no.”

As.Exchange’s Zvezdin told Finance Magnates that “it’s a part of regular market paradigm – whatever has risen will fall, and vice versa.”

“Ether might keep going higher and higher for some period of time, but it will certainly retrace to lower levels (which yet will be higher than before),” he explained. “The only question is ‘when that will happen?’”

Indeed, “when” is always the golden question: “market timing is not an easy task as many known factors need to be considered, together with the unknown, for example, very few people in September 2020 would expect WSB to happen; who knows what will be next?”

“Therefore, to the average market participant, the best strategy may be either investing long-term based on fundamentals (a.k.a. ‘HODLing’) coupled with dollar-cost averaging (DCA), or (if you possess the required skillset and knowledge), pursue momentum strategies, (aka ‘trend-following’).”

A very helful blog…Thank you