A number of the more libertarian voices within the crypto community (looking at you, John McAfee) have argued that storing savings in Bitcoin and other cryptocurrencies is a great way to avoid paying taxes.

While it is true that it can be difficult for the government to detect exactly how much money you’ve made if you haven’t converted any of your cryptocurrency into fiat currency, it is now harder than ever before to sweep that sweet, sweet Bitcoin money under the rug and out of the government’s view.

And it’s only going to get harder. While 2018 didn’t bring much regulatory change in a legislative sense for the cryptocurrency world, the government has more understanding of how the system works than ever before–and it is keener than ever to collect its share of what the market has to offer (although there were some quite heavy losses across the board.)

The point is to be aware: big brother is watching, and he wants to know about all of your gains and losses. This is particularly true if your cryptocurrency has (at any point throughout the year) been on a cryptocurrency exchange, especially an exchange within the United States. There is more pressure on exchanges now than ever before when it comes to complying with regulators’ wishes–and if the IRS wants to see an extensive record of an exchange’s accounts, then so be it.

Additionally, Enrolled Agent Beth Logan told Finance Magnates that since last year, “the IRS has [developed] a program, through blockchain analysis contractors, to find crypto investors that are trying to evade taxes.” Indeed, the IRS partnered with Chainlaysis earlier this year for this very purpose.

Some Investors May Have Failed to Report Out of Ignorance, Not Negligence

The IRS’ apparently increased drive to collect on crypto gains is likely due to the fact that the organization missed out on tons and tons of revenue last April. Despite the fact that there were plenty of people who had made plenty of money during the massive cryptocurrency boom of late 2017, tax reporting figures were pitifully low–last April, tax preparation software company Credit Karma reported that of the 250,000 tax returns that had been filed through its reporting service, less than 100 mentioned gains or losses in cryptocurrency.

Per the IRS guidelines, we are to use a “reasonable manner that is consistently applied” to calculate the cost and sale values of our cryptocurrencies, when trying to determine our gains and losses

However, it’s important to keep in mind that the lack of reporting can be at least partially attributed to a lack of knowledge about cryptocurrency in general. Many cryptocurrency investors have little or no experience with reporting income earned on any type of investment; some may not even know that this kind of reporting is necessary.

And what about money earned through other cryptocurrency-related things, like mining, hard forks, and airdrops? The fact is that the organization simply hasn’t provided very much guidance on exactly what needs to be reported–and with a group of investors that may already feel bewildered by the simple W2 forms that have to be reported each year, it’s unlikely that widespread accurate filings on cryptocurrency gains will take place anytime soon.

If you have lost coins due to hacking, sketchy ICOs, forgotten passwords, inaccessible wallets, stolen coins, etc., you might be able to deduct these as losses. These various types of losses are all treated differently though, so consult with a tax professional first!

Little Information on Correct Reporting Has Been Provided Since 2014

“The IRS has provided little more information than their six-page Q&A from 2014,” Some people in Congress have requested more guidance from the IRS but it hasn’t occurred yet,” said Logan, although this may change in the near future: “as audits are performed and cases appear before tax court, the IRS will likely be pushed to provide more regulations.”

Paul Banker, general manager of tax reporting at Sovos, told Finance Magnates that the lack of clarity could lead to the spread of misinformation from exchanges to their users: “There has been a lack of clarity from the IRS regarding the specific ‘form’ exchanges should be providing to their customers for the various transactions in this space,” he said.

Banker continued to say that in most cases, cryptocurrency traders should plan to use information on the 1099-B form to report their crypto gains and losses on transactions of securities, and the 1099-K to report gross proceeds that have been paid via electronic methods. Cryptocurrency exchanges were told to provide 1099-K forms to their users in the 2014 directive, but few of them actually began to comply with this mandate until 2018.

The good news is that “the reporting threshold for the 1099-K form, which is used to report online payments processed by companies such as rideshare and home-share services, is very high–$20,000 and 200 transactions per year.”

Additionally, “there is no threshold for the 1099-B, so the reporting differences for the exchanges are significant, and this is why the industry is closely watching the regulatory environment for guidance.” This means that in most places in the United States, cryptocurrency gains and losses that do not exceed a total of $20,000 need not be reported.

Still, there are variances state-by-state, and one should never assume that just because they only made a small amount of money that they are in the clear. Banker says that in some states (ie Massachusetts and Vermont), reporting thresholds for the 1099-K can be as low as $600.

”The Timing of Any New Information is Still Uncertain”, And It Probably Won’t Be This Year

Indeed, “The question is how those regulations will continue to take shape,” Banker said. “The IRS promises to offer clarity, but the timing of any new information is still uncertain.”

And according to the 2018-2019 Priority Guidance Plan, published by the Department of the Treasury and the IRS, it won’t be anytime this year–cryptocurrencies are not mentioned at all throughout the entire document.

But until more clarity is achieved, IRS Commissioner Charles Rettig said that the cryptocurrency industry should, “pay attention to informal guidance as though it’s formal guidance,” and that “the IRS will have more information about [crypto] than you could ever imagine.”

In other words, the IRS does not see its own lack of clarity as an excuse for failing to report cryptocurrency gains and losses.

While we have not seen any widespread subpoenas of exchanges happen so far this year, we must not forget that in late 2016, the IRS demanded that Coinbase hand over roughly 500,000 customer records. Although Coinbase took the summons to court and managed to lower the number of records it handed over to just 13,000, the tax agency meant business–and though this was the first time that something like this happened, it certainly will not be the last.

So, investors who have traded in cryptocurrency at any time throughout 2018 need to do their best to correctly report their gains in order to avoid trouble. According to many tax experts, this is inclusive of not only crypto-to-fiat exchanges, but crypto-to-crypto exchanges, which (although there has been no official ruling) are not generally considered to be like-kind exchanges, which would make them tax exempt. Buying or selling goods or services with cryptocurrency is also considered to be a taxable event.

Selling crypto for fiat (e.g., USD) is a taxable event.

Trading one coin for another is a taxable event.

Using crypto to purchase goods or services is a taxable event.

Indeed, the IRS’ general view on cryptocurrency is that they are legally taxed as property rather than currency, and as such, crypto earnings should be reported as capital gains. For federal reporting, this means that cryptocurrency investors must fill in and file two separate forms: Schedule D, which is where investors report gains and losses and form 8949, which is where investors must provide records of their trades.

Logan says that “for most investors, holding the cryptocurrency for over one year will allow the gains to be taxed as long-term capital gains which are lower than ordinary tax rates,” Logan said. 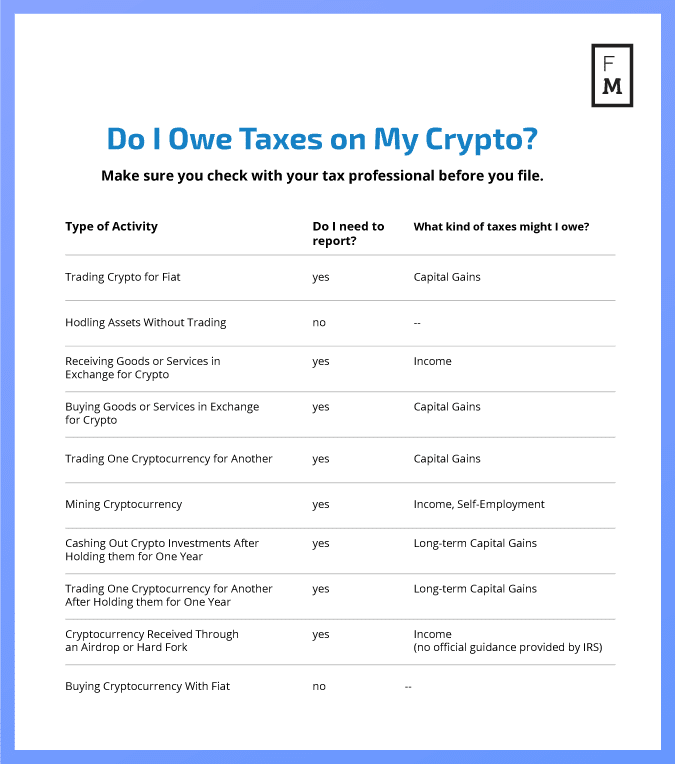 If you have just realized that you are one of the individuals that may need to report your cryptocurrency earnings this April, don’t panic–you’ve still got time. But remember, failing to report could cost you in more ways that one.