Bitcoin is officially back up and over the $60K mark after briefly dipping below the line this weekend. BTC originally recaptured $60K on Saturday after staying in the $50,000s for the better part of a month.

What’s driving BTC up? eToro’s Simon Peters said in a statement that the rise is due to “a number of factors.” Namely, “new demand from institutional investors and wealth managers offering cryptoasset exposure to clients,” as well as “a decline in on-exchange reserves is reducing supply as more investors move the currency to their own wallets.”

Could Bitcoin’s current price momentum be the start of a run to $70K? 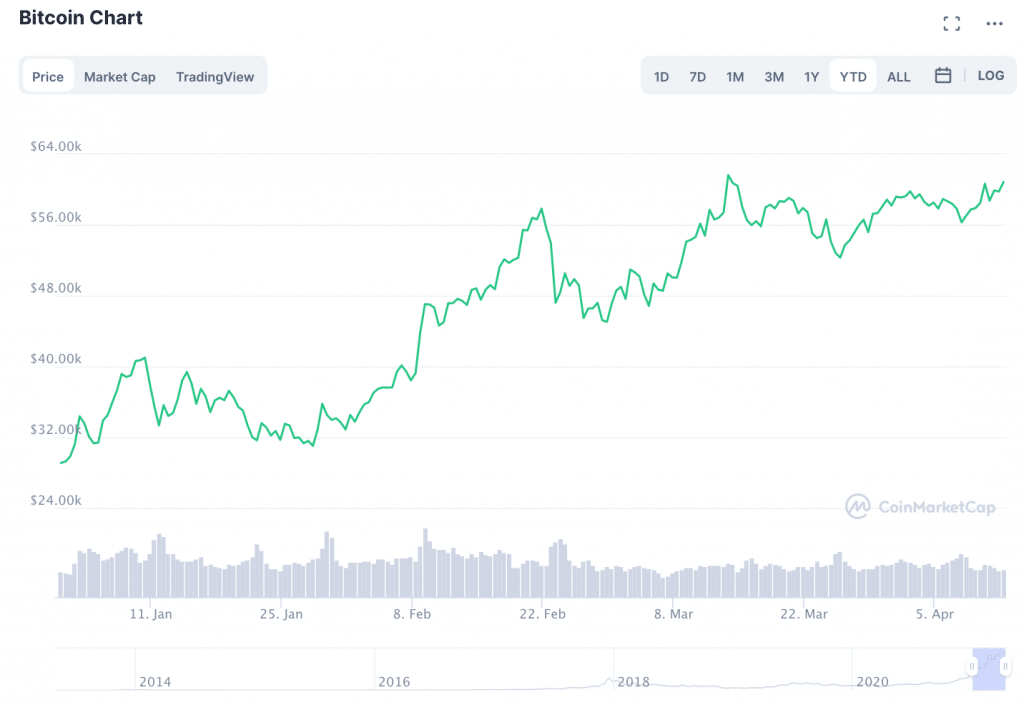 Corporate and Institutional Movements for Bitcoin Are Playing an Important Role

Additionally, Corporations have shown an increased appetite for involvement in the crypto world. Earlier this month, Finance Magnates reported that both Visa and Paypal were making their way into crypto. Visa announced that it was developing plans to begin settling some of its transactions with USDC on the Ethereum network; PayPal announced that it would be giving its users the option to pay merchants with crypto.

Additionally, Simon Peters pointed to the recent entry of State Street asset management firm into the crypto universe. “State Street has forged a deal to lend its trading technology to start-up Pure Digital, which aims to be the main institutional platform for bitcoin,” Peters said.

The exchange is scheduled to launch in the middle of the year. “This launch is yet another example of major financial firms exploring cryptoassets and looking to play a more substantial role in the market,” Peters said. In addition to Paypal and Visa, StateStreet is following in the footsteps of “BNY Mellon, Goldman Sachs and Morgan Stanley. This year could be a momentous one for the adoption and appreciation of crypto assets in not only the retail but institutional market too.”

Moreover, Peters pointed to Rick Caruso’s retail estate company, which owns luxury apartments and outdoor malls (‘The Grove’ and ‘The Americana’) which will now accept rent in the form of bitcoin. Tangentially related, Peters pointed to McDonald’s recent announcement in France that it will be releasing a series of its iconic menu items as NFTs.

Could Bitcoin’s current price momentum be enough to push the BTC price to $70K? Some analysts believe it may be so. However, BTC’s price movement in the coming days will determine whether BTC is ready to gain further ground, or if another retracement is imminent.