Less than a week after the price of Bitcoin dipped to nearly $51,000 the price of BTC has steadily risen to nearly $60K. A number of analysts believe that this run could bring Bitcoin to new all-time highs, and that $73K is the next target.

According to CoinTelegraph, Bitcoin’s latest upward moves are due in part to news that broke this week on Visa and PayPal’s entrance into BTC and the world of cryptocurrency payments.

Specifically, Visa announced earlier this week that it would be settling some USDC transactions from users of the Crypto.com Visa Card through the Ethereum blockchain. On Tuesday, PayPal confirmed that its users officially had the ability to send cryptocurrency payments to merchants. 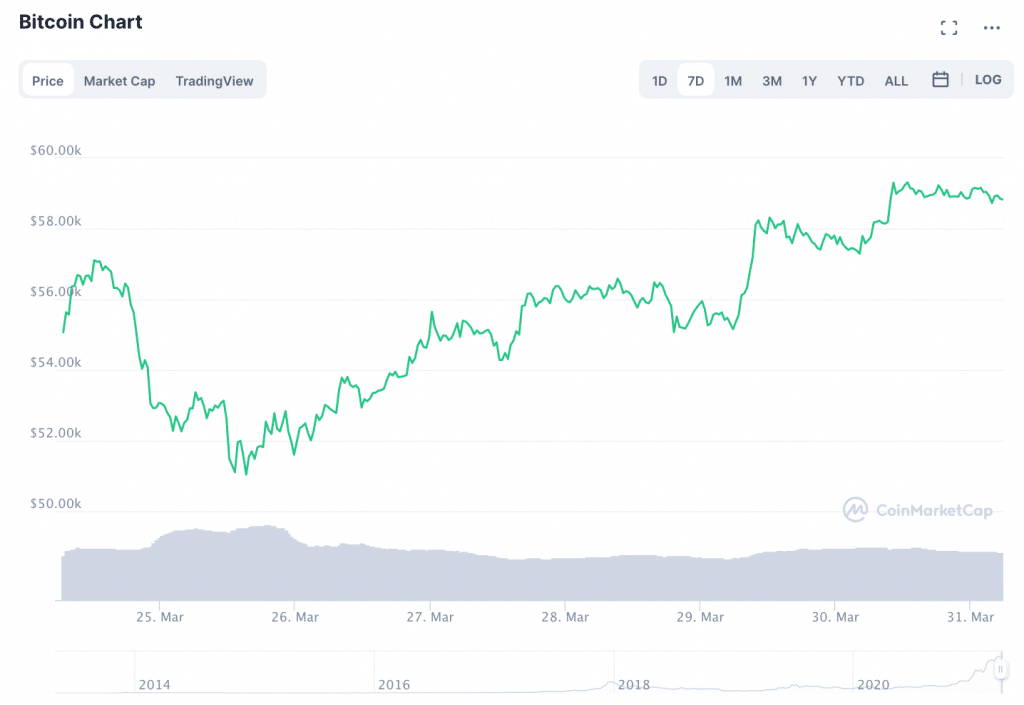 “The Entire Structure since September Is Massively Bullish”

Therefore, Bitcoin’s current price run seems to be the latest of many news-fueled rallies that have taken place since the beginning of the year. On January 1st, the price of Bitcoin was just under $30,000. Today’s levels near $60,000 represent a growth spurt of nearly 100%.

Indeed, in an article for Cointelegraph, trader and analyst Michaël van de Poppe wrote that: “the entire structure since September is massively bullish when the market broke above $12,000 and started to accelerate.”

Because the run has been so strong, van de Poppe wrote, BTC’s current ‘higher low’ sits between $49,500-$51,000. In other words, this is where Bitcoin has bottomed out during its last several corrections. Previously, BTC’s higher low sat at around $42K.

Because BTC’s lows are getting higher, van de Poppe believes that new highs are imminent. “$73,000 and $92,000 become the next points of interest if Bitcoin’s price breaks above the current all-time high at around $61,000,” he wrote.

Additionally, Van de Poppe said that Bitcoin’s market dominance will play a critical role in the price of BTC throughout the longer term. Specifically, if Bitcoin’s dominance drops below 60%, van de Poppe predicts that: “an assumption can be made that a sharp drop will occur toward 50%.”

“That’s not unlikely to happen since the summer period is often very favorable for altcoins,” he explained, adding that: “2020 saw big rallies during this period, and investors remember the summer of 2017.”

Still, the Paypal and Visa news has a number of investors making big predictions for BTC. Kraken Chief Executive Jesse Powell told CoinTelegraph that Bitcoin’s price will continue to rise by the measure of expensive cars: it will be “one Bitcoin per Lambo” by the end of the year, he said, and “one Bitcoin per Bugatti” by 2023. At the moment, a single BTC will buy a Tesla Model 3.

Furthermore, Finance Magnates previously reported that the supply of Bitcoin is shrinking on leading cryptocurrency exchanges, a sign that BTC holders are not selling their coins in anticipation of big gains for BTC.