As BNB continues to gain popularity, it seems that a growing number of analysts are pointing to the Binance Smart Chain (BSC) as a serious threat to the Ethereum network. Citing faster and cheaper transactions, these analysts believe that the BSC could overtake Ethereum as the ‘backbone’ of the decentralized finance (DeFi) ecosystem.

This increase in user activity has been reflected in the price of the Binance token (BNB), which has continued to rally as the Binance Smart Chain continues to rise in popularity. BSC, which was launched in September of 2020, acts in parallel to the Binance Chain. BSC allows for smart-contract functionality and provides a staking mechanism for BNB tokens.

According to data from CoinMarketcap, BNB surpassed Polkadot to become the third-largest cryptocurrency by market cap on Friday. BNB went on to hit a new all-time high on Saturday, with a price above $342. At press time, BNB was holding strong at $271. 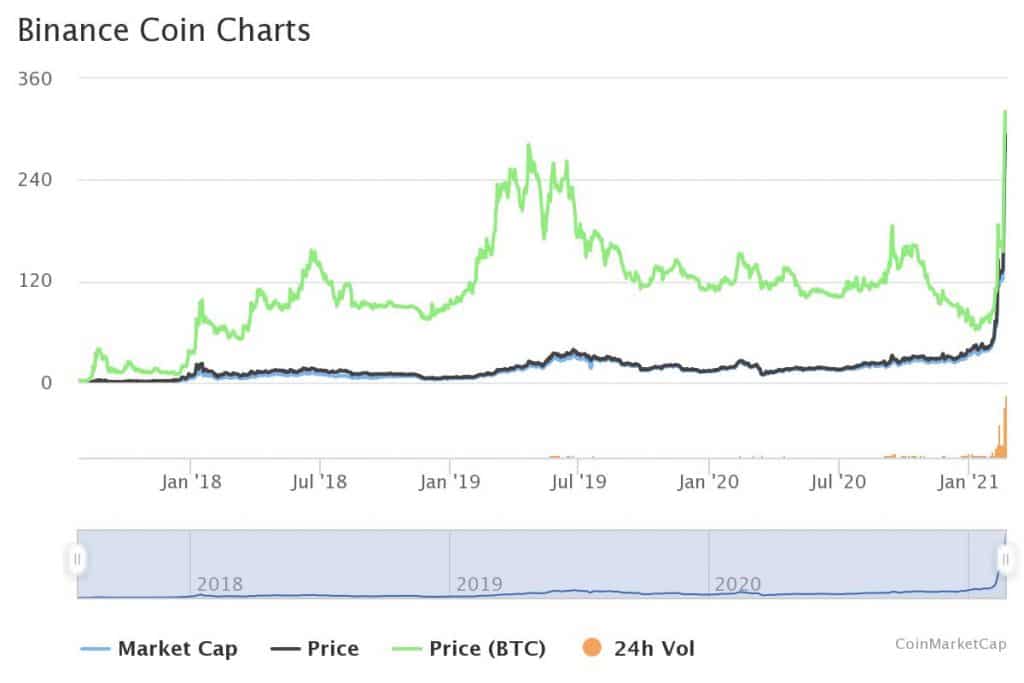 ”If You Want More Users for Your Dapp, You Need to Be on #BSC Now.”

As the BSC ecosystem continues to grow (and the price of BNB along with it), BSC has become the chain of choice for a growing number of DeFi protocols.

Indeed, a handful of projects have left Etheruem in favor of BSC, including Value DeFi and yield aggregator, Harvest Finance. Binance Chief Executive, Changpeng Zhao has encouraged projects to migrate to BSC since the chain was launched in the fall. However, as BNB has continued to grow over the past week, he has taken to Twitter with renewed enthusiasm.

On Saturday, February 20th, Zhao commented that: “there are almost 2x more transactions on #BSC than on ETH. If you want more users for your Dapp, you need to be on #BSC now.”

There are almost 2x more transactions on #BSC than on ETH.

If you want more users for your Dapp, you need to be on #BSC now. pic.twitter.com/ZYnbFOVysc

Restricting comments due to the provocative joke. 😂 https://t.co/jmIr3Xbi6p

”Have an Infinite Mindset.”

However, he encouraged Ethereum and BSC community members to get along with one another. “For those holding ETH, no need to attack #BSC. We together make the industry bigger. ETH price did not drop. It increases together with #BNB. Have an infinite mindset.”

A number of other platforms that were already hosted on the BSC platform have seen positive movement as a result of the growth of the BSC. For example, Venus, which Cointelegraph describes as “an algorithmic money market and synthetic stablecoin protocol designed specifically for BSC,” has grown significantly along with the BSC. The Venus token (XVS) has grown more than 2900% since its October launch, sitting at $75.37 at press time.

Moreover, PancakeSwap (CAKE), another BSC-based DeFi project, has seen massive growth since its inception on the Binance Smart Chain last autumn. CAKE was trading at roughly $1.40 when it launched in late September; today, that figure is up to $15.23. Furthermore, PancakeSwap is listed as the third-largest automated market maker in the DeFi space, following behind Uniswap and Sushiswap.

Why is BSC proving to be such a strong contender for an Ethereum replacement of sorts? A number of analysts say that it all comes down to cost and speed. As Ethereum has seen fees increase and transaction speed slow down with the growth of traffic on the network, DeFi developers have begun to look elsewhere.

A software update known as Eth2.0 is already underway to address the scalability issues on the Ethereum network. However, with a launch date that is months (or even years) in the future, some analysts believe that Eth2.0 may be too little, too late.

A spokesperson for Binance told Cointelegraph that: “feedback we have heard is the DeFi protocols are increasingly chain-agnostic. The rapid growth of BSC shows the users prefer lower transaction fees. BSC also provides a variety of assets, many of which are not available on DeFi protocols on Ethereum.”

Why does nobody mention that Binance Smart Chain is build on Cosmos SDK? So Cosmos is the competitor to Ethereum..

due to the same reason why nobody talks about the centralized nature of BSC. In a bull run like this you rarely see constructive creticism on anything. People forget why crypto exists in the first place and only chase often irational gains. Without really questioning the why. The whole DeFi hype is an example. Last time everyone chose the ICO’s. Now everyone locks their stuff up in some DeFi projects to “provide liquidity” no one ever heard of. Then suddenly make money on the real projects that actually try to do something like your Cosmos, Cardano and so on… and… Read more »

The problem with Binance smart chain is that they have almost no innovation, they just rely on Ethereum projects, fork them, and in the best case make some minor changes within their code.
I think in long run it would not be -by no means- an Ethereum killer, however, it might keep its own users and ecosystem working in parallel to Ethereum 2.0

Great piece of information, thanks for sharing!

Good Information, Thanks For Sharing