An Italian court has ruled that cryptocurrency exchange BitGrail must remain closed which its bankruptcy proceedings progress, and its saga appears to be nearing an end.

The story goes like this: BitGrail is an Italian cryptocurrency exchange operated by a man named Francesco Firano, AKA The Bomber. It was at one point moderately successful, although issues with withdrawal limits had begun to worry customers even before the drama began.

It began offering a cryptocurrency called XRB, which is the coin of a company called Nano. XRB coins currently retail at $4.42 and the network has a market capitalisation of approximately $588.3 million, according to coinmarketcap.com.

A hack occurred in February 2018, and 17 million XRB coins were stolen, worth around $170 million at the time. It was the only currency stolen during the attack.

The Nano team and Firano blamed each other for the theft and strongly disagreed about how to deal with the aftermath. Their feud led to a few lawsuits. Nano claimed that BitGrail was holding XRB in a different kind of wallet to other coins, which left it vulnerable. Firano claimed that the Nano network itself was flawed, and moreover if Nano was to undergo a hard fork the money could be recovered. Nano disagreed and said that it would finance the legal expenses of the victims.

Firano’s response to the crisis angered his customers, so much so that he received death threats.

The story took a funny twist though when it was Nano that was first to face legal action by investors seeking a force a hard fork to recover their money. This would have set a remarkable precedent.

Firano eventually suggested a repayment scheme to be funded by a re-opened BitGrail. He did not admit that his exchange was at fault despite evidence surfacing that it was his mismanagement that caused and exacerbated the security vulnerabilities of the site.

Following this, a group of victims filed a petition requesting that BitGrail declare bankruptcy. The petitioners called for unity among the victims, saying that they were more likely to get their money back if they worked together.

At the beginning of March, Firano attempted to reopen the exchange (despite 79 percent of respondents to his Twitter poll saying that they would prefer the bankruptcy route), but within 3 hours it had been shut down again by the court which approved the precautionary suspension request of the law firm representing the 3,000 clients. 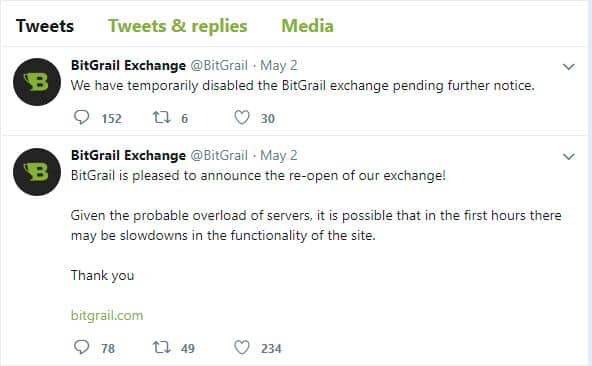 This suspension was pending a final decision, which was reached last week – the court has seized the company’s remaining assets which are to be managed by a special administrator.