Robinhood increased its user count by 241.67% from January to June 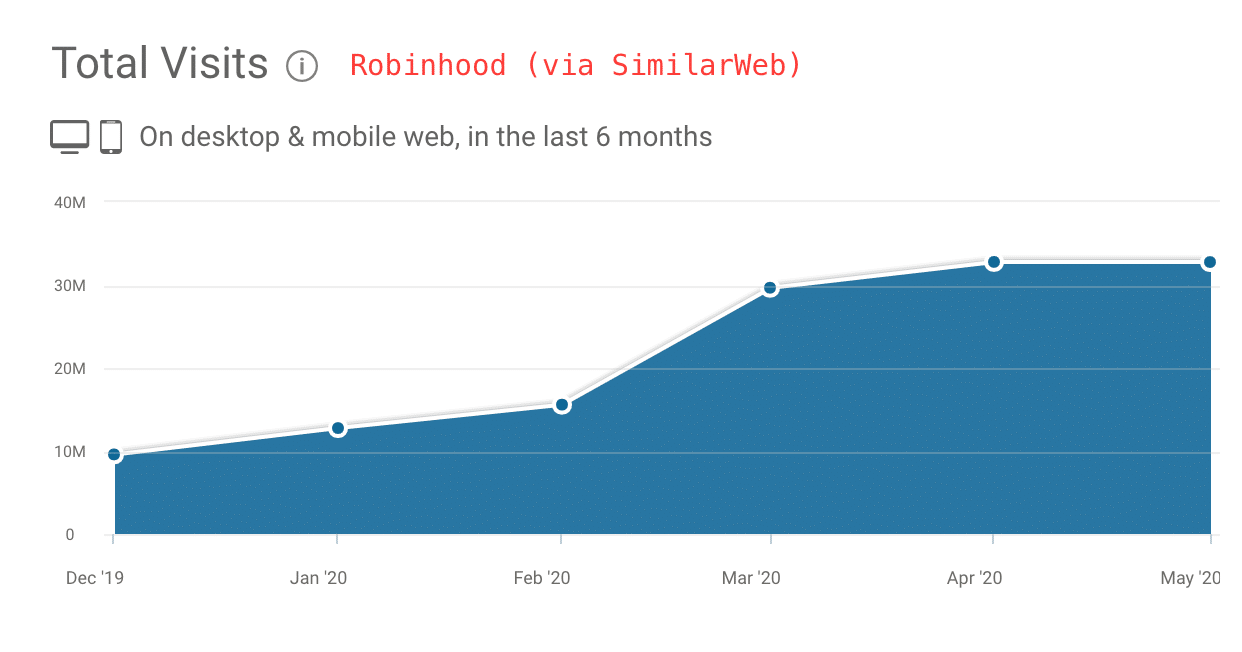 While Robinhood hasn’t released any official data on how many new users came during or after the month of March, when quarantines and widespread global panic began to rise. However, Haider Rafique, chief marketing officer at cryptocurrency exchange OKCoin, pointed out to Finance Magnates that there was a massive uptick in website traffic to Robinhood’s home page.

Indeed, according to data from SimilarWeb, the total number of visits on Robinhood’s website was steadily increasing in the months prior to the global outbreak of COVID-19, from 9.6 million in December, to 12.8 million in January, to 15.6 million in February–an average increase of roughly 3 million new page views per month.

However, in March, the number of page views skyrocketed to 29.7 million–an increase of 14.1 million new pageviews. In April and May, the surge leveled off at roughly 32.8 million page views per month, representing a 241.67% increase from December to May.

Social trading platform eToro (which also offers commission-free trading) also reported an increase to 13 million users in May of 2020; eToro previously reported having surpassed 12 million users in December of 2019.

Yoni Assia, founder and chief executive of eToro, told Finance Magnates that “on eToro, we have seen a 400% increase globally in new users coming to eToro and investing for the first time in the first 4 months of 2020 compared with the same period last year,” according to new investor data that was accurate as of 11 May 2020. 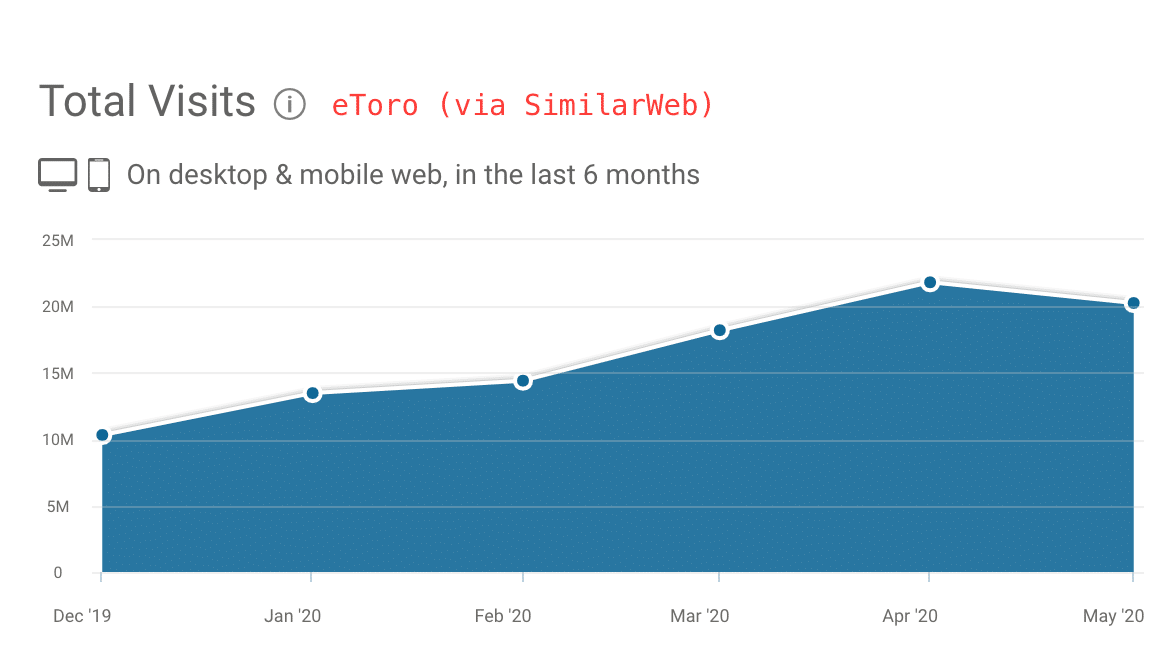 Clement Thibault, an industry consultant with SimilarWeb, told Business Insider last week that “Webull’s growth mirrors Robinhood’s growth since the beginning of the year…Of course in terms of absolute numbers, Webull pales in comparison to the estimated 32 million visits Robinhood had in April 2020, but that’s pretty good company to be in if what you’re looking for is strong growth.” 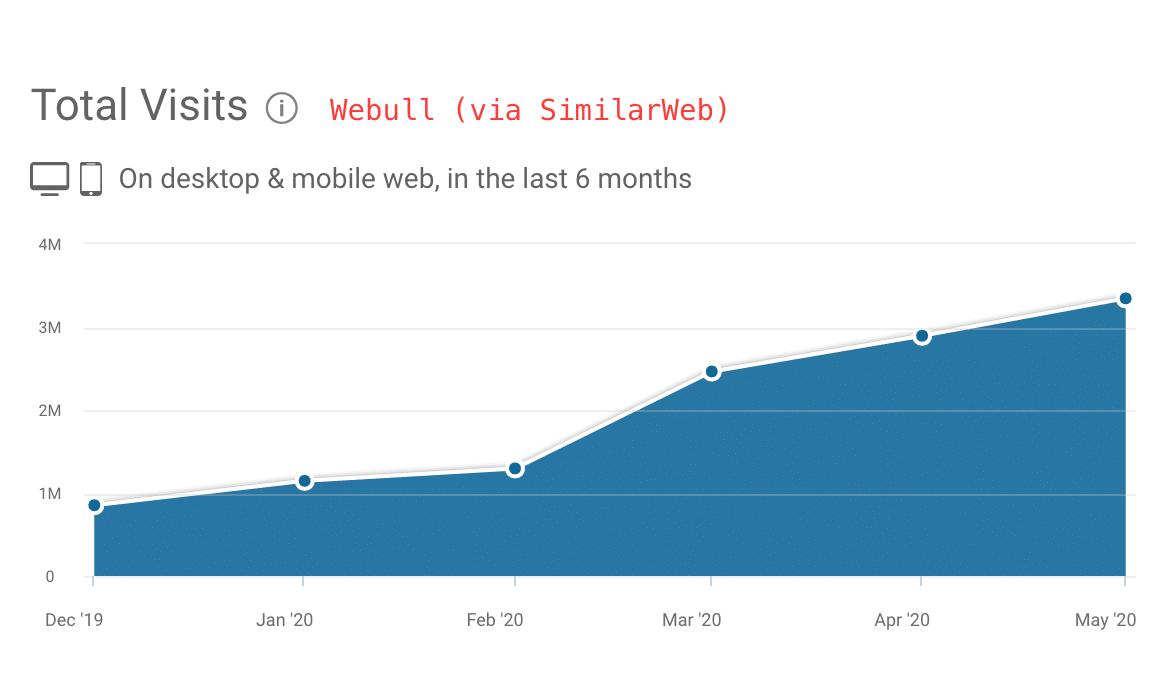 New users skew towards millennials, may be “really bad at portfolio diversification”

Who exactly are these new users and what are they investing in?

There is some evidence to suggest that the groups of new users on these platforms–Robinhood, in particular–may be mostly compromised of millennials and GenZers; after all, Robinhood is renowned for its beloved status with today’s young adults.

Similarly, eToro’s Yoni Assia told Finance Magnates that “currently, half of eToro’s customers holding crypto positions are under 35,” according to data from June 9th, 2020.

However, it may also be that most of Robinhood’s users are ‘dabblers’ more than they are experienced and serious traders–in December, The Next Web reported that “Robinhood users are really bad at portfolio diversification”: that “ the average Robinhood user owns stocks in [just] two different publicly listed companies or ETFs.”

The publication also found that the technology, consumer cyclical, and healthcare sectors accounted for 67% of all stock holdings on Robinhood, meaning that “sector-wise Robinhood seems much less diversified than the market in general. Overexposure in one particular sector, in this case, tech, obviously poses risks.” Users also showed favor toward smaller-cap companies.

More recently, Business Insider India reported that “Robinhood traders are piling into Hertz, JCPenney, and other bankruptcy stocks despite the massive risks.”

Beating Buffet at his own game?

It’s possible that Robinhood’s millennial user base is taking a leaf from Warren Buffet’s book–being greedy when others are fearful.

Max Keiser, broadcaster and renowned Bitcoin bull, pointed this out in a tweet aimed at skewering Buffet earlier this week–specifically, Keiser pointed out the irony of Buffet’s law of fear and greed when it came to Berkshire Hathaway’s decision to sell all of its airline stock at a huge loss at the start of the COVID-19 pandemic.

Indeed, Markets Insider reported that Delta Air Lines was the fifth most popular stock on Robinhood in May.

“The airline operator was owned by 540,543 users at the end of May, compared to 426,267 users in the prior month,” the publication said. “The 27% jump in Robinhood accounts that own the stock was accompanied with a 3% decline in Delta’s stock price in May, signaling that investors are buying the dip in Delta.”

Keiser suggested that, just as the original Robinhood stole from the rich to give to the poor, “Robinhood App users stole Warren Buffett’s money (his recent, huge airline losses), by buying up airline stocks during the crash – and creating wealth for poor Gen Z kids.”

Keiser further suggested that Robinhood’s users are taking the money that they’ve earned from airline stocks and investing it into cryptocurrency: “[they’re] picking over Warren Buffett’s career corpse; booking huge profits on his mistimed stock sales, and then rolling that money into Bitcoin.”

Millennials skew further towards Bitcoin than their predecessors

However, Kyle Kroeger, founder of Financial Wolves, told Finance Magnates that “there is limited data to suggest” that Robinhood users are putting their cash into Bitcoin–at least, not to the point that Bitcoin is affected in a significant way.

“Robinhood is made up of predominately retail investors and by that volume, there is little evidence that could move the needle,” Kroeger explained. “Institutional and high-frequency trading will always have a much greater impact [on Bitcoin] than retail trading.”

Still, Robinhood and similar trading apps could act as a sort of ‘gateway’ into cryptocurrency for first-time investors: Kroeger said that Robinhood’s millennial and GenZ user base “certainly have a more open mind when it comes to financial technology.“

“These generations grew up around technology. Bitcoin is largely a technology play due to the nature of the blockchain. Older generations rely on trust and what they know and grew up on.”

“Cryptoassets have been growing in popularity amongst younger investors.”

Indeed, eToro’s Yoni Assia told Finance Magnates that “cryptoassets have been growing in popularity amongst younger investors. In 2019 those under the age of 35 became the leading demographic group to invest in crypto on eToro globally,” according to millennial data that was accurate as of 20 February 2020.

Similarly, a nationwide study conducted in the United States by Bankrate, millennials are three times more likely to invest in cryptocurrencies than GenXers.

OKCoin’s Haider Rafique also told Finance Magnates that OKCoin’s user base also skews towards millennials. “According to our data and analysis, ~50% of our users are typically millennials between the ages of 25-40. Out of those ages, 25-34 make up the majority (about 40%) of the users we attract on our platform.”

“Because bitcoin is purely digital and a dramatic shift in thinking in how we conceptualize ‘money’, naturally the younger segments [of the population] have an easier time onboarding, whereas older generations are still either skeptical or intimidated by the deemed technical know-how,” he said.

Apps like Robinhood may not be a gateway into crypto, but they could be gateways into investing more broadly

However, even if apps like Robinhood aren’t necessarily acting as a ‘gateway’ into crypto, however, it seems that they are acting as another kind of gateway–for many people in younger generations, Robinhood, eToro, and other apps act as a passage into investing in financial markets for the first time.

By offering fractional, commission-free stocks, platforms like eToro have encouraged the younger generations to invest and we have seen them buy into the companies whose services or products they know and use. We’ve especially seen them crowd into technology-related stocks such as Amazon and Netflix.’

OKCoin’sHaider Rafique also said that “in some ways, [these apps] have played a massive role by making ‘equities and stocks’ more accessible by creating an easy (less intimidating way) for younger users to participate in the traditional stock market.”

Indeed, more broadly, “the FinTech and crypto revolution has made everyone aware of the need to take responsibility for their financial future, and now much more financial instruments are available to them, not just those with a certain net worth.”