Visitors to coinmarketcap.com today are seeing a rather alarming picture: 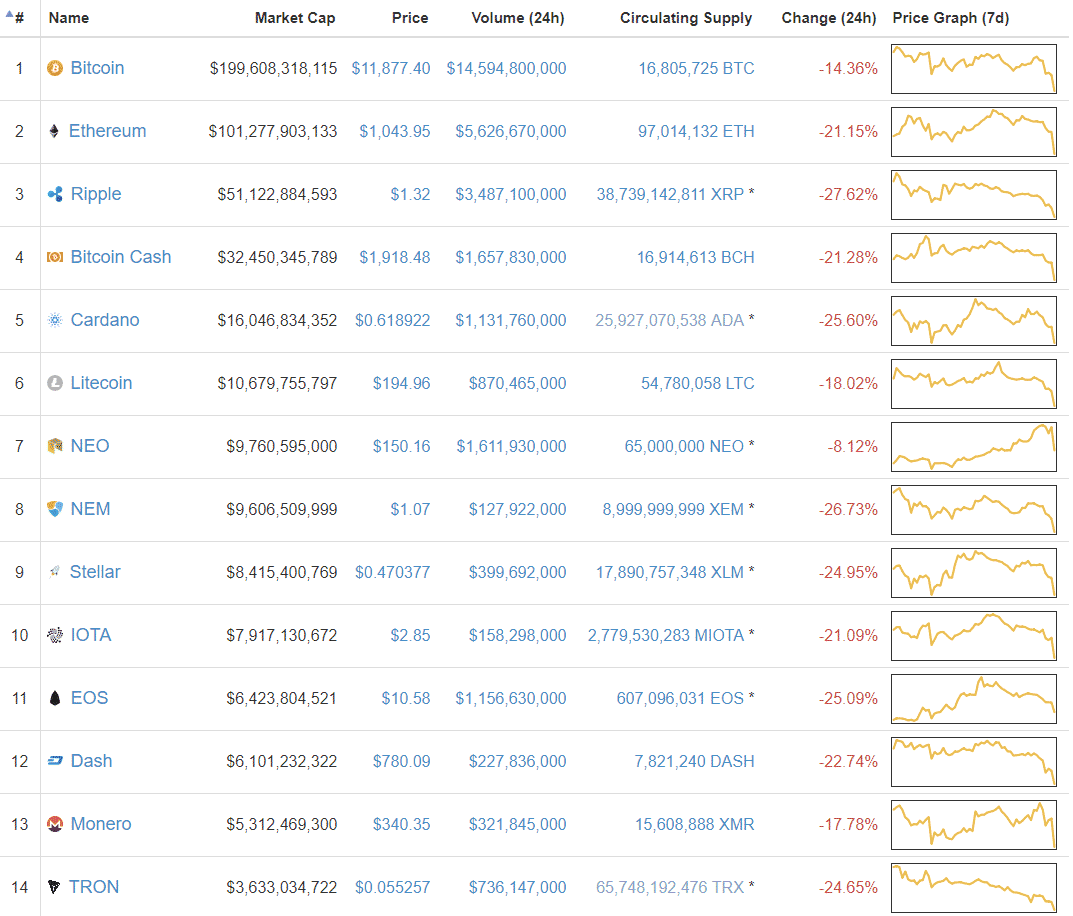 To what can we attribute this drop? We naturally look to Asia, as it is this continent that drives the majority of cryptocurrency movements. Are government crackdowns finally having an effect? Is the market simply undergoing a correction?

Great time to switch from BTC into Alts. BTC down 15% some Alts down 50%. If you feel like you missed the Alts party, there is an after party that starts soon…

Largest dollar value loss on my portfolio ever in a 48 hour period.

Being Asia’s fourth-largest economy, developments here have a big impact on cryptocurrency prices. After Justice Minister Park Sang-ki suggested that trading could be completely banned, the average price of cryptocurrencies was said to have plunged over 20 per cent, according to Bloomberg.

However, none of this seems to have dampened public enthusiasm for the assets at all – the announcement inspired a petition which gained 180,000 signatures. It was reported recently that South Koreans are investing more in cryptocurrency than they are in the stock market, which is backed up by the fact that the use of cryptocurrency phone applications has grown by 1300% in the last month alone.

Chinese cryptocurrency exchange Binance recorded 44% growth in its number of users directly after rumours of a total ban in South Korea emerged.

But perhaps they ran to the wrong place – China is indeed the beating heart of the Bitcoin organism, but the Chinese government has been even harsher towards cryptocurrency than its southern neighbour.

It banned cryptocurrency exchanges late last year, and following some flip-flopping, finally told the mining industry that it needs to leave too – this is the same mining industry that accounts for more than two-thirds of the world’s mining power. In addition to this, it is now planning to block access to mobile apps and online platforms, both domestic and offshore.

This surely has had some role in the massive drop in price. Charles Hayter, CEO of Crypto Compare, told CNBC: “It seems like it is uncertainty spooking the markets to a degree with regulations unclear.”

Iqbal Gandham, the managing director of eToro UK, agrees: “The market is correcting off the back of news that China is moving to crack down on cryptocurrency trading. Chinese investors are likely spooked having heard the news and the market is on edge as a result.”

Should investors be worried?

We have seen this before.. pic.twitter.com/8ZlKC0whrH

To say that the market is under serious threat seems to be an exaggeration. Chinese mining companies are looking at Switzerland and Canada as alternative bases of operation; Binance is operating from exile in Tokyo.

According to Business Insider, Mati Greenspan of eToro attributed the drop to Japanese and South Korean investors tired of paying premiums: “Looks like they’re tired of overpaying for cryptos and waiting for the market to even out.”

Gandham said: “…we don’t expect to see a major sell-off. Bitcoin in particular has gone through this cycle before, eventually shrugging off regulatory clampdowns from governments and central banks after initially falling in price.”

While all of these factors do indeed play a part in the price crash, Coinmarketcap charts show something interesting – the coin that has dropped more than any other is Binance Coin: -41%.

We wrote about Binance last week. It is a relatively new cryptocurrency exchange that had to temporarily close because it couldn’t handle the sheer number of new customers from China. After re-opening, it receive almost one quarter of a million new registrations in one hour. It recently partnered with the most popular video hosting company in Asia, and in an interview with Bloomberg the CEO said that the exchange was beginning to attract big institutional investors. All this despite its government turfing it out to Nippon.

So why would such a phenomenally successful business be down so much?

This year, 2018 Chinese Lunar New Year falls on the 16th of February.

Economists are traditionally cautious of drawing conclusions regarding the market of the world’s second biggest economy until around March exactly because of the disruptive effect of this holiday, which always falls between the 21st of January and the 20th of February.

On a yearly basis, Chinese factories shut down up to two weeks in advance of the holiday as millions migrate back home to exchange presents and enjoy the holiday season. According to the Boston Globe, shipping companies warn their customers that “China’s transport and logistics networks are at capacity and their shipments must be at ports two weeks ahead of the holiday to stand a chance of getting on a boat before the country shuts down.” Andrew Sullivan, managing director at Haitong Securities in Hong Kong, said that trading volumes drop considerably in the three days before the holiday.

Not only this – millions are withdrawing money to buy gifts at the same time, not only in China but also in Vietnam, South Korea, and countries with large Chinese minorities such as Malaysia and Indonesia.

China and South Korea together are the major forces driving movements in the cryptocurrency market. The decisions of the governments of these two countries are definitely having a big effect on the market, but as we have seen many times in the past, cryptocurrency companies find ways to operate, and the public continues to find ways to use them.

The holiday season, less well-known in the West, is another major factor to consider here.