With over 100,000 downloads, Blockchain’s iOS app was the most widely used the most widely used bitcoin wallet among iPhone and iPad users when it was pulled from Apple’s iTunes store this past January.  The deletion of the app was the last of many similar bitcoin wallets and related apps that were removed from the Apple store.  At the time, the news sparked widespread animosity towards Apple from the bitcoin community, of which many elected to migrate to Android devices in protest. 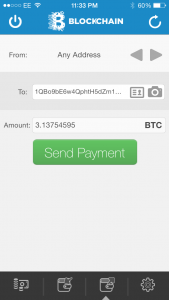 Following a half year hiatus, and changes within Apple towards bitcoin related apps, the Blockchain iOS bitcoin wallet has returned to the Apple store.  According to Blockchain, within the process of reinstating their app, the wallet has been “rewritten from the ground up with an emphasis on security and usability”, thus answering questions of alleged security concerns which had been attributed to Apple as a possible theory of their removal of bitcoin related apps.

About the change in Apple’s direction, Nicolas Cary, CEO of Blockchain stated to Digital Currency Magnates that “Apple has signaled an intention to change its policy toward bitcoin and digital currencies in general. This is a pivotal moment for Bitcoin, Apple is the world’s leading consumer brand, this goes a long way to legitimizing future development. It’s also really great news for software developers who want to reach a huge audience of several hundred million iOS users.”

In addition to focusing on security, Blockchain also enhanced the app’s appearance and user experience.  On this, Cary explained in his company’s prepared remarks that “We’re very excited to continue investing in iOS again and working with Apple to reimagine how the world transacts.” Overall, according to Blockchain, they have over 1.9 million users of their mobile and web based bitcoin wallets.