Coinbase said via Twitter and on its website that it was experiencing slower than normal response times and that its application programming interface was down. The exchange’s website and retail mobile app also experienced connectivity issues.

Rival exchange Kraken also said on its website that it was suffering from a “partial system outage” as clients reported difficulty connecting to the site and API.

The two most heavily trafficked crypto exchanges in the US are getting heat from customers who were unable to make transactions after its server went down for about 45 minutes. 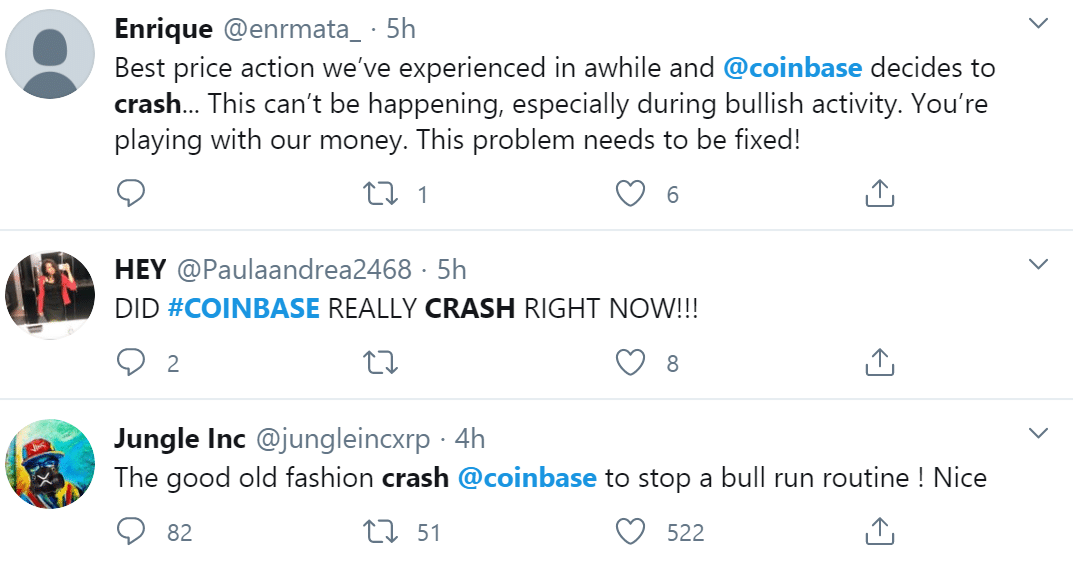 Kraken, one of the world’s longest-operating cryptocurrency platforms, attributed the issues to “the very heavy traffic.” It has pointed to an unexpected surge in transaction and user volumes leading to a server outage.

The San Francisco-based platform has recently introduced FX trading to its customer base with the launch of nine new currency pairs. The move allowed cryptocurrency traders to expand their horizons and begin trading into a $6 trillion market, further diversifying their portfolios and trading options.

Both companies have struggled for nearly one hour to keep up with the surge of interest in bitcoin trading but finally managed to restore their normal operations at around 15:20 PDT .

“All affected components have returned to a fully operational state. The engineering team will continue to monitor site performance. We will continue to provide updates as necessary,” Kraken updated on its status page.

A gentle reminder to crypto traders

Offering its apology to disgruntled customers, Coinbase also blamed a sudden surge in usage as the culprit that caused a server connection failure.

With the BTC block halving is less than two weeks away now, Bitcoin surged by eight percent today as the cryptocurrency breaches $8,000 for the first time in two months. All of which led to unprecedented traffic that crippled the exchanges’ servers, akin to a DDoS attack.

The No.1 digital coin gained over $1,000 in just one day, topping out ahead of $8,700. The last time it was anywhere near this level was a month ago, before crypto prices crashed and when the impact of coronavirus began to spread.

Despite the ongoing development in crypto exchanges’ technical infrastructure and engineering staff, the  latest incident reminds crypto traders that access to even major platforms may become degraded or unavailable during times of significant volatility or volume.

Share this article
Tags: coinbase / Kraken
Got a news tip? Let Us Know