Joining the ranks of digital currency marketplaces is a new site called Celery.  Created by the team behind the multi-exchnage trading platform BTX Trader, Celery is marketing itself as easy to use destination for first time users to buy digital currencies.

When BTX Trader came out, the project was a bit of an enigma, as it was purchased by WPCS International shortly before its launch.  A penny stock, WPCS had no other involvement with digital currencies until their purchase of BTX Trader, prompting some to believe that it was simply a side show to boost their stock price.  BTX Trader though did show promise, as it provided a user friendly and more advanced charting and trading experience than what exchanges had been offering themselves.  When we reviewed the platform, we believed that if it worked right, it would appeal to arbitrage traders that wanted to monitor and trade with multiple exchanges simultaneously.  Since releasing its first downloadbale version, the team behind BTX Trader has continued to iterate on their product, having added a web based version of the platform, and now rolling out Celery.

On its launch, Celery offers for sale bitcoins and dogecoins to US customers with US bank accounts.  The marketplace is similar to that of Coinbase and Expresscoin, offering users an online wallet and direct bank transfers to link accounts to buy digital currencies.  Celery’s aim is to create an edge by appealing to first time buyers by providing what they believe is the easiest purchase and ongoing account experience for bitcoins.

As part of its simplified approach, after account verification and linking a bank account, users can by bitcoin in predetermined packages such as $19.99 and $49.99, or enter the amount they want, with a 1% fee tacked on.  Once buying bitcoins, Celery has a reporting function where users can enter where bitcoins or dogecoins were spent.  With IRS rules requiring bitcoin spenders to report a cost basis of the digital currency, the reporting function in Celery helps satisfy these needs. 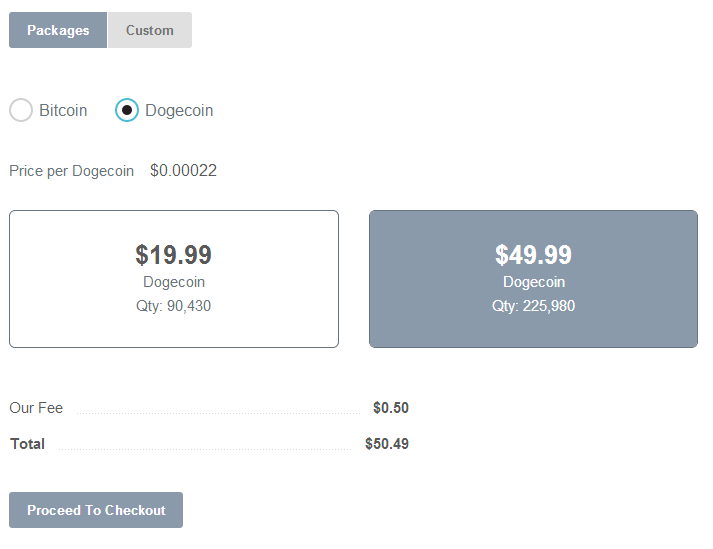 Among other features, according to Celery they will be storing 98% of user digital currencies in cold storage.  They also allow customers to enter a cell phone number for two-factor authentication.

Share this article
Tags: Exchanges / startups
Got a news tip? Let Us Know