Bitcoin has been soaring for weeks, and touched the record $10,000 mark this week, while Ethereum has only now reached a price of $500. But when it comes to the number of transactions in the blockchain network, Ethereum dwarfs Bitcoin. 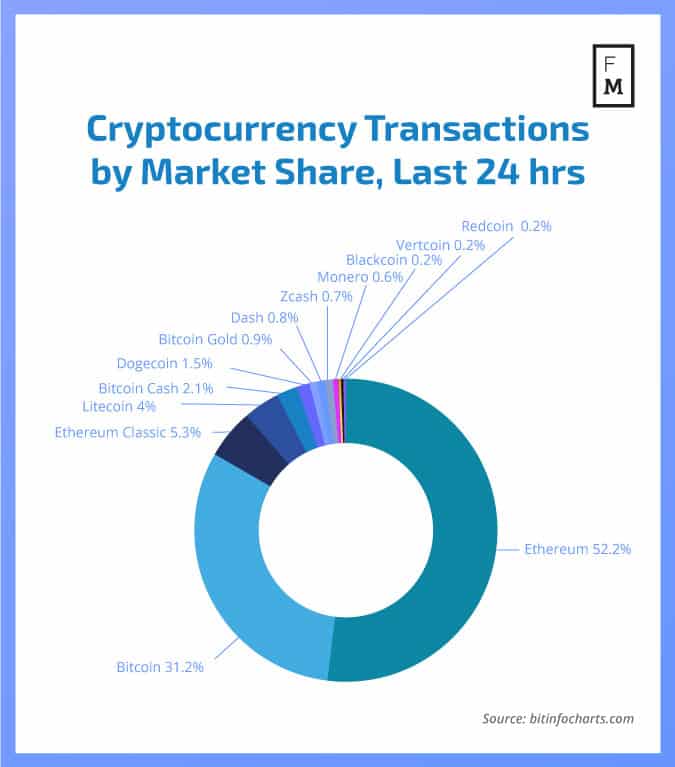 Yesterday, Ethereum recorded 638,989 transactions on its network, which is almost 100,000 more than a few days before. For comparison, Bitcoin’s public blockchain recorded 382,723 transactions in the last 24 hours.

According to ETH gas station, 10% of all Ethereum transaction were handled by Etherdelta, a decentralized crypto exchange.

Recently, Ethereum recorded more than 50% of all the transactions in the cryptocurrency market, which means that it is processing more transactions than all the other coins combined.

With the increased number of transactions, platform fees have been increased from sub-penny to a cent, but the most crucial uncle rate among Ethereum developers remains at the usual level.

Addressing this issue, Ethereum founder Vitalik Buterin said: “The uncle rate, probably the best indicator for how much the blockchain is struggling under the load, does not seem to have moved up by much.”

But with Bitcoin we saw a move away from this correlation in March this year when the price of the token went up without any significant change in the number of transactions.

Buterin recently unveiled its roadmap for Ethereum 2.0. He addressed all the issues faced by the network today and is determined to make the network VISA-level scalable within 3 to 5 years.

The network will soon launch its upgrade from proof of work to proof of stake, called Caspers, which comes along with rumors of it upgrading to Constantinople.

Also, it is worth mentioning that ahead of the monetary protocol update in the Ethereum Classic, its price almost doubled with around 60% trading volume registered by ETC/KRW accounts.

Completely false. Bitshares and Steem have been over million transactions per second all year with 1.5 sec confirmations. Countless blockchains are faster and more secure than onecoin or ethereum – highly centralized premined projects (unlike real crypto, 70% of eth coins were taken by developers to control the network)