The activity of crypto whales, a term used to describe holders of massive amounts of digital assets, has hit a fever pitch on Tuesday as deep-pocketed investors move more than $2 billion worth of different cryptocurrencies.

In less than one hour, five anonymous whales just shifted over 18,500 Bitcoin, worth nearly $1.02 billion at the current price, to unknown wallets, according to Twitter-based crypto transaction tracker Whale-alert.io. 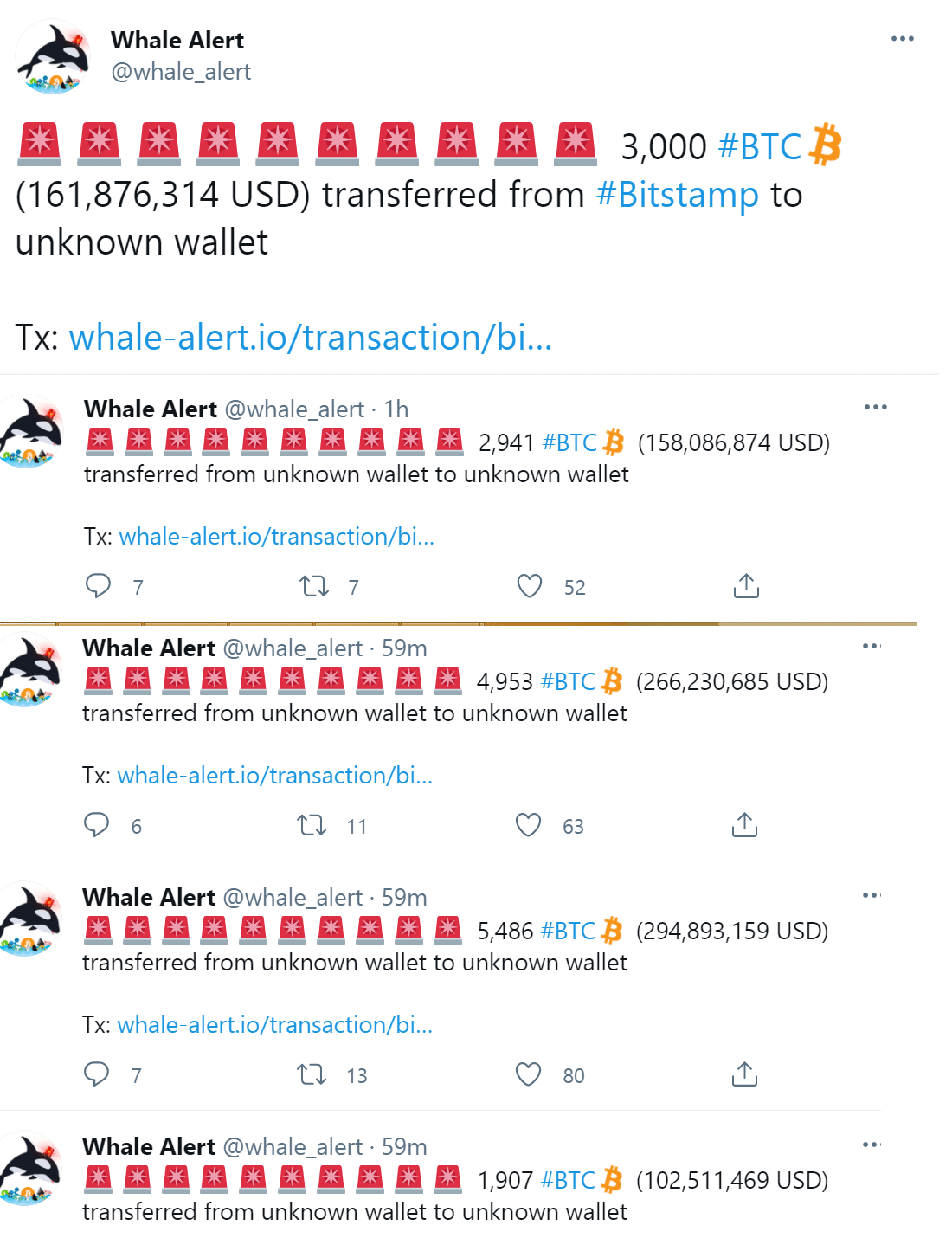 The distributed ledger monitoring has reported dozens of giant USDT transactions in the last hour.

One of the largest transactions involved a whale relocating 4,953 BTC worth $266 million from an unknown wallet to a separate wallet of unknown origin. The Twitter handle Whale_Alert noted another transfer of 3000 bitcoins, worth roughly $161 million, from Bitstamp crypto exchange to an anonymous wallet.

Another transaction shows a big hodler shifting 5486 BTC worth $295 million between two wallets of unknown origins.

It is not the first time that multiple transactions of this magnitude have taken place, but such moves are rarely seen in the market. Bitcoin whales have been moving large stacks of their holdings at record levels over the last two months, amid high institutional demand for the crypto assets.

Although it is impossible to know why the cryptocurrency was moved, it could just be that a cryptocurrency exchange is shuffling its own holdings. Additional speculations include internal transfers between exchange wallets, institutions moving crypto to cold storage, or OTC block trades.

Meanwhile, these huge transactions may have triggered the strong bullish momentum seen in the BTC market today, with bitcoin hitting a two-week high at $54,800. And, it is easy to understand why. As whales accumulate more coins, Bitcoins circulating supply reduces, and this strengthens further bullish rallies in the days ahead.

Continuing its upward rally amid heightened interest from bigger investors, traders are now eyeing the psychological $60,000 per bitcoin level sooner than later.

As a result, the latest gains took the combined value of all the bitcoin tokens in circulation past $1.14 billion as of writing, according to the industry website, CoinMarketCap.

Share this article
Tags: Bitcoin (BTC)
Got a news tip? Let Us Know

Lot of traders and analitycs thought that Bitcoin will reach 120 000$ this year. We will see…