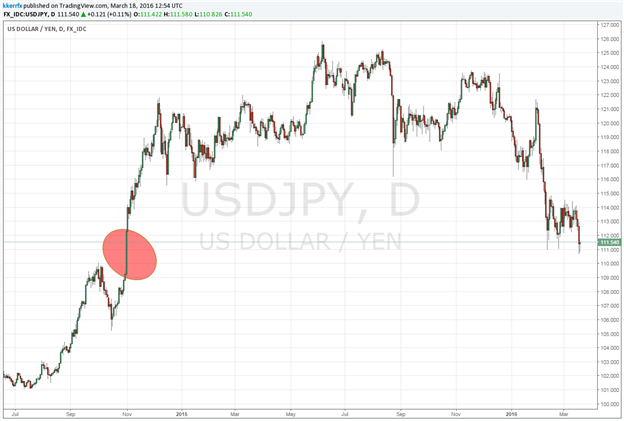 USD/JPY fell to its lowest level in almost a year and a half yesterday before finding support around a trendline/Fibonacci expansion in the 111.00 area and recovering sharply. The aggressive move prompted almost immediate talk of intervention. I do not think it is off base. The 109.17 – 112.47 daily range from October 31, 2014, remains of interest to the markets and Japanese policy makers as that was the day of the surprise QE announcement from the BOJ and when Japan effectively went all–in on “Abenomics”. I think a break of this range would be psychologically damming for the market and is something the BOJ/MOF would like to avoid and, for this reason, it is not all that surprising that the exchange rate has gotten sticky around current levels.

The big question mark in all this is the G20 meeting last month in Shanghai and what really went on. Judging from recent central bank rhetoric and the reaction of the USD since then it is not all that farfetched to think some gentleman’s agreement was struck. If that is the case, will the Japanese risk ending the détente in the global currency war by intervening aggressively? Probably not, so if the official hand is in the market it is probably going to be operating covertly unless forced otherwise. This argues choppy trading likely continues – especially on thetechnical breaks. The big tell that authorities are “giving up” would be a clear break of 109.00.