Canadian Dollar Rebound Is a Wonder to Behold

Aside from the Japanese Yen, which recently hit levels not seen since October 2014, the Canadian Dollar is the 2nd strongest major currency in 2016. Ironically, the Canadian Dollar seemed to be on the losing side of the Oil correlation as the price of Oil began its fall in Summer of 2014, USD/CAD began its ascent from 1.06195 up to the January 20 high of 1.4678. However, the Bank of Canada would put doubts on the interest rate cuts and a few months later the Fed would place doubts on multiple rate hikes,and now, USD/CAD shows little sign of slowing down.

Since January 20, USD/CAD has fallen 1734.9 pips or nearly 12% in nine consecutively bearish weeks. Thursday morning’s drop in USD/CAD saw a move below 1.3000 for the first time since October. A break below the October 2014 low at 1.28311, when WTI Crude Oil reached $50.90/bbl, would bring about the lowest level since July. This move has made the Canadian Dollar the strongest G10 Commodity currency in 2016.

In a recent post, we stated that USD/CAD should ‘Bounce Now Or Forever Hold [Its] Peace.’ The only words we’ve heard have been that of Janet Yellen, who has talked down the US Dollar since she hiked in December, which has put the US Dollar in retreat mode.

When looking at sentiment, crowd sentiment has moved positive providing favor for more downside. We use our Speculative Sentiment Index as a contrarian indicator to price action, and the fact that the majority of traders are net-long at a bull: bear of 1.82 as 65% of traders are long. This reading means that a bearish USD/CAD signal is currently at play, which has been the case since late February. Now that the price has broken below the 200-dma, we’re forced to stare at the October low. A break below this new key support metric and a move further into positive territory on the SSI would favor further downside towards downside targets mentioned above.

Combining the technical picture above, with the sentiment picture, and the Intermarket analysis support further warns of more CAD gains ahead. 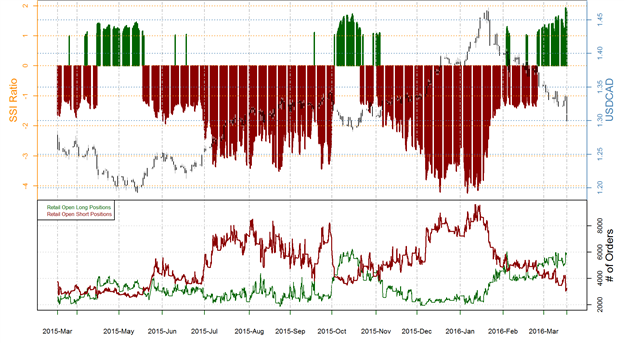