GBP/USD – Waiting For a Catalyst 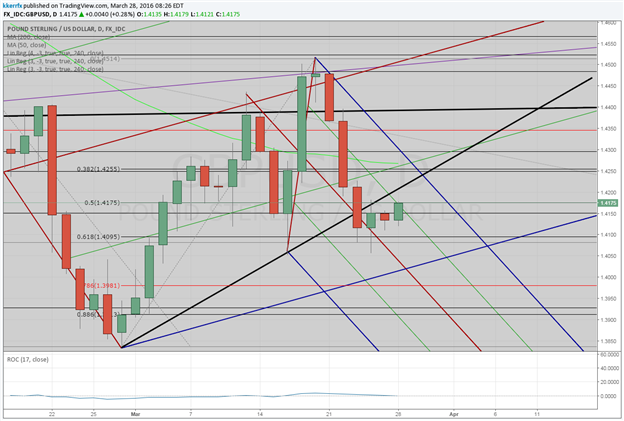 There isn’t much to say about the price action in GBP/USD or most of the major exchange rates for that matter over the past few days. This depression in vol. can mostly be attributed to the Easter holiday and it will be interesting to see if we do get a burst in volatility before the payrolls number on Friday. I suspect we will, but the markets are in desperate need of a catalyst.

In Cable, I remain a bit torn. Since late January, the price action has been very sloppy, but nothing has really happened that would call into question the broader downtrend. You could say an inverse head & shoulders pattern was triggered around the middle of the month, but if anything, the failure to see any upside follow through is a technical negative. Perhaps the inverse head & shoulders pattern is still developing, but it is still early days. I would need to see 1.4475 overcome to take the pattern more seriously. For the moment, I am more inclined to view the action of the past couple of months as a consolidation within this broader decline. The 1.4050 area looks critical in this regard, as traction below that level would be strong evidence that the downtrend is indeed trying to reassert itself. As mentioned above, a breach of 1.4475 would trigger a bullish reversal, but over 1.4250/75 would certainly bolster the idea that the tide is turning more favorable for the GBP/USD.