The FTSE 100 has now spent more than three week’s trading around the same levels. While this is hardly encouraging for day trading, low volatility episodes tend to be followed by high ones. We also note that the longer a market trades sideways, the stronger a potential move could be, usually following a break to the range. The EURCHF debacle of January 2015 is an extreme example of this idea.

Which are the critical levels for the FTSE 100?

The highest price point over the last three weeks is the March 18 high, while the lowest level over the same period is last week’s low of 6006.

On a break to 6006, we may see volatility pick up as described above, as not only is it the lower end of the range over the last few weeks, but is also the trend defining level.

A break to last week’s low would place all long positions since March 2 at a loss, as all of them have been exercised above the low. This could stress traders to shift out their losing long positions and thereby trigger even lower prices.

A break to last week’s low of 6006 may therefore turn the trend bearish and generate a slide to the next support level, which is the February 24 low of 5839.

On price remaining above the low of last week, the FTSE 100 may drift higher. However, it is important to note that a break to the March 18 high might not ensure a strong resurgence in volatility. We saw on March 4, March 17, and March 18 that a higher high did not in these cases spur the trend to firm.

Instead, the FTSE 100 may continue to drift higher but without a strong pick up in volatility. The last resistance level, where price reversed, was the December 29 high of 6322, and could be where the FTSE 100 may now be headed.

With no macro data on tap this morning, trading in the FTSE 100 may be dominated by flows and technical trading. In the afternoon, U.S. New Homes Sales is projected to rise by 3.2% MoM according to a Bloomberg news poll. 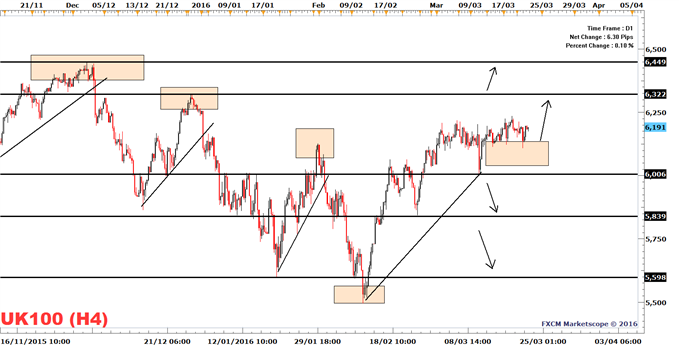