In a sign that conditions are set to worsen for the Turkish Lira, the nation’s Central Bank opted to leave the main interest rate on hold during its decision on Tuesday, disappointing market expectations. The consensus estimate of economists and analysts was a forecast of a 0.50% increase to the base rate.

Instead the lending rate was raised by 75 basis points in an unconventional way to fight losses in the Lira. Nevertheless, the action was not enough to spark a real reversal in the currency, with the kneejerk reaction in the Lira largely negative before recovering modestly.

The Central Bank is nearly powerless to implement any real change

With inflation still on the rise and Turkish President Tayyip Erdogan vehemently opposed to any more rate hikes, the Turkish Central Bank has found itself caught between a rock and a hard place as they try and stem the losses in the Lira.

Without the ability to raise rates in an effort to curtail inflationary pressures and reverse an ongoing decline in the Lira, the Central Bank is nearly powerless to implement any real change to the narrative as the Turkish economy slips further into disarray.

After multiple stern warnings from the President, the Central Bank of the Republic of Turkey held firm on interest rates in a decision announced on Tuesday.

While most forecasters had anticipated a rate hike to halt inflation which has already climbed back above 8.00% on an annualized basis through the end of December, all were let down with the decision to leave the key rate on hold. With the Lira still sliding, upside inflationary pressures are only likely to climb as time passes, especially if the Central Bank fails to act.

However, to acquiesce to Erdogan’s demands to leave rates unchanged, the institution is risking destroying the confidence of international investors at a time when the economy can ill afford any more setbacks.

The greatest evidence of the downside risks remains the Turkish Lira. With no relief in sight for action on rates, the Lira plunge may continue unabated over the coming weeks, especially if the US dollar rebounds after its most recent selloff.

Despite comments from President Donald Trump and Treasury Secretary Nominee Steven Mnuchin talking down dollar strength, on a comparative basis, the United States is poised for the best growth amongst G7 nations. Furthermore, talks of a proposed $1 trillion infrastructure spending plan from the Democrats has only raised confidence in the outlook even further.

Upside inflationary pressures are only likely to climb as time passes

Bearing in mind these factors, without a more defined plan to tackle Lira strength and surging inflation, Turkish policymakers may be on the path to wreaking havoc across the economy for years to come.

Although the Lira managed to recover significantly from an earlier selloff after the announcement, the risks factors for the currency remain firmly to the downside. While USDTRY has retreated from new record highs reached earlier in the month, the currency consolidation could pave the way for a breakout once it concludes.

Furthermore, most technical indicators are firmly on the side of the bulls despite the potential for a deeper pullback after the most recent upside momentum. Supporting the continued upside in the pair are the 50-day and 200-day moving averages which are trending beneath the price action.

As such, with momentum indicators such as the Relative Strength Index and Stochastic Oscillator trending closer to the midpoints of their respective ranges, any further downside likely corresponds with a technical correction. 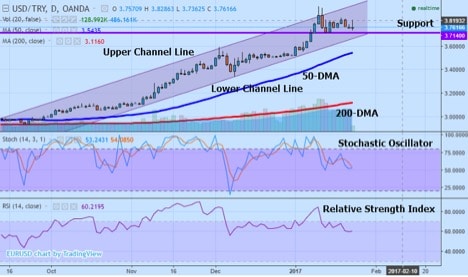 Besides momentum indicators, a medium-term bullish equidistant channel formation remains intact, indicating that any USDTRY pullback may be short-lived. Ideally, any bullish position initiated at the lower channel line should target the upper channel line for an exit.

However, a break below the lower channel line could conceivably suggest a downside breakout, especially if accompanied by higher momentum and trading volumes. First though, support sitting at 3.7140 must be broken. If USDTRY fails to clear this hurdle, it sets the stage for another run at the upside and new multi-year highs in the currency pair.

With the Turkish Central Bank operating largely at the mercy of President Erdogan, additional rate hikes are unlikely until the situation becomes all too dire for policymakers to fix. By not addressing the root of the problem and taking actions to correct the Lira losses and inflation, other areas of the economy, like GDP growth, will probably suffer.

With situations like this rapidly turning into self-fulfilling crises, no action will likely lead to an out of control spiral lower in the Turkish currency over the medium-term until the situation becomes desperate. Considering the dollar’s backdrop remains overwhelmingly positive, Turkish bank officials will have to press for a rate hike to prevent conditions in USDTRY from spinning out of control.

Turkey’s crisis is due the Islamist mindset backed by Mr. Erdogan’s personal agenda to become the caliph of the Muslim ummah (nationhood).

Turning away from the secular ideals set by Ataturk will have its setbacks. Foreign investors are losing faith in this country, and hence its currency is suffering.