In the run-up to the OPEC meeting in Vienna, Austria, detractors had little confidence in a consensus being reached. The price of Brent crude oil and WTI crude oil was hovering around $45 per barrel – $50 per barrel for much of the month.

However, disagreements between Iraq, Iran and Saudi Arabia were quickly ironed out. Now, we can expect oil inventories to slowly start declining. Of course, as inventories decline so the price rises. Global oil inventory levels have been at record highs of late.

The oil price has plunged from approximately $114 + per barrel in 2014 to its current range of $50 or less in 2016. OPEC has lost billions of dollars, and oversupply has characterized the market. The fact that Russia agreed to reduce its oil output is surprising. 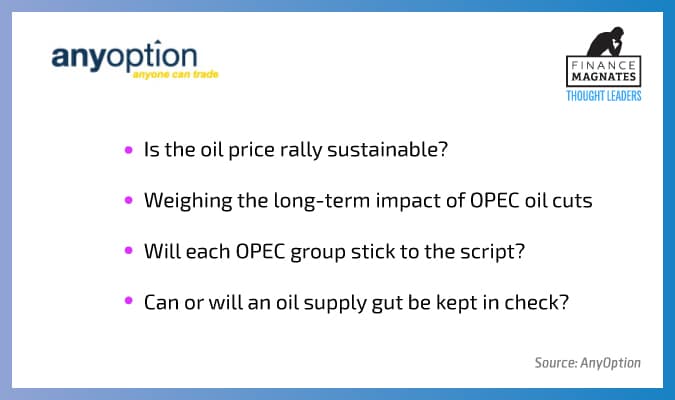 Overall, the net effect of the OPEC production cuts has been a sharp rise in crude oil prices. Oil rose by 10% on the Nymex on Friday, and major energy companies also enjoyed strong gains.

This Begs the Question: Is the Oil Price Rally Sustainable?

Recent news in the oil markets has been positive for major commodities like gold (+0.70%), silver (+1.95%), heating oil (+0.62%) and gasoline (+0.78%). Global equities markets have had a field day, with rising expectations for energy stocks, inflation targets, and overall economic growth. The Trump phenomenon is also playing into equities markets with many traders feeling bullish heading into the New Year.

Global equities markets have had a field day, with rising a outlook for energy stocks

The question of whether crude oil will continue to rally is a tricky one. For starters, any cuts in OPEC production will invariably run down inventory levels. OPEC currently produces an estimated 33% of global crude oil. A sharp reduction in output presents as an opportunity for WTI crude oil producers.

Already, we are seeing Canada making strides towards firing up its own oil production facilities. Consider that on that fateful day on February 11, 2016, the WTI crude oil plunged to just $26.19 per barrel. Today, the price has almost doubled, and Canada sits front and center with approximately 4 million barrels of crude oil per day. The type of oil that Canada produces is synthetic crude, light oil, natural gas liquids and bitumen.

In Canadian dollars, a single barrel of oil is worth approximately C$30 more today than it was in March 2016. In actual dollar terms that is C$120 million per day in revenue that Canada is reeling it in. As more producers enter the market, we will see the effectiveness of OPEC oil cuts slowly being degraded.

Speculators Got a Heads up on the November Surprise

Back in September 2016, OPEC members met in Algiers. However, what appeared to be an unsuccessful meeting was in fact a platform for the November 30 meeting whereby production cuts came into existence. Since analysts were expecting the oil price to rise precipitously, long positions on crude were being taken out left, right and center. Analysts believe that a figure of C$65 per barrel was entirely possible.

As more producers enter the market, we will see the impact of OPEC oil cuts slowly being degraded.

Drilling contractors are in demand and exploration and production companies are excited about oil prospects. By the end of September 2016 at the OPEC meeting in Algiers, production cuts were being discussed. The oil price rose above $50 per barrel but the rally was unsustainable. Several interesting developments have taken place since the November 30 meeting in Vienna. These include some 234 oil rigs drilling for crude in Canada. This figure was reported by June Warren Nickles. The highest figure prior to that was 241 rigs in January 2016.

Here it is! The #OPEC production cut agreement. @CNBCi pic.twitter.com/4USnRCdbrv

According to the Canadian Association of Oil Well Drilling Contractors, the 2017 forecast anticipates a 31% spike at 4,665 oil wells. Impressive though it may be, that number was well over 10,000 wells back in 2014. We can expect the number of oil wells to increase well beyond that figure now that OPEC has sharply cut its supply. Canadian oil production is also getting a big boost from the federal government.

How Strong is the OPEC effect?

Both WTI crude oil and Brent crude oil move similarly when production cuts are put into practice. Come January, OPEC will be reducing its output by 1.2 million BPD. This will place OPEC production at an incredible 32.5 million barrels per day, but several countries are exempted from it. These include Libya and Nigeria.

As expected, crude oil futures markets rallied on the back of this news. WTI crude jumped 0.3% at the time and it spiked 9.3 percentage points on Wednesday, 30 November 2016. Saudi Arabia – the world’s largest oil producer – will cut its output to 10.058 million BPD. Iran will limit its production to 3.707 million BPD.

The impact on speculative sentiment is immense. With less inventory, available, stockpiles will gradually be used up and production will be able to influence the market price. Several energy companies including Continental Resources Inc. and Whiting Petroleum Corporation have surged because of rising oil prices.

Throughout December, record levels of crude oil output will continue

Russia will participate in the oil production cuts (-300,000 BPD), Kuwait (-131,000 BPD) and United Arab Emirates (-139,000 BPD). Throughout December, record levels of crude oil output will continue. This will add to inventory levels around the world, and keep prices relatively stable over the holiday season. In 2016, OPEC is expected to generate revenues of $341 billion from exporting oil according to the EIA.

In 2014, OPEC generated revenues of $753 billion prior to the oil price crash. Record levels were generated in 2012 when OPEC output amounted to $920 billion in revenue. The next meeting of OPEC member states will take place on 25 May 2017. The oil price really has been a major catalyst for equity price movement across the world.

The DFM General Index of Dubai enjoyed its third successive day of gains. It was up 1.7%. Oil price rallies positively affect investor sentiment. By Friday, Brent crude oil was trading at $54.46 per barrel, and this bodes well for Gulf Cooperation Council States (6 countries) which produce approximately 33% of global oil.

How Will a Supply Glut Be Kept in Check?

There are several ways that crude oil output levels can be maintained. Foremost among them is the participation of non-OPEC oil producing countries such as Russia. If Russia sticks to its promise of 300,000 barrels per day in reduced production, the OPEC target will be maintained. Details are sketchy about the participation of key countries, but a deal will likely be thrashed out in Doha this coming week.

Meanwhile, the big news in the US is the November employment data with NFP adding 180,000 jobs. The other news relates to the Fed FOMC meeting on Tuesday/Wednesday (13/14 December 2016). Per the CME Group, the likelihood of a rate hike on Wednesday, 14 December is now at 92.7%.

If all holds true, a 25-basis point federal funds rate hike will be put into place soon. US shale oil fields are getting ready to turn their spigots on, much to the dismay of OPEC which had heretofore controlled the market.