Unable to form a government after elections held five months ago failed to produce a coalition, Spaniards are heading back to the polls on June 26th, contributing to an ongoing air of uncertainty for the political and economic outlook.

The intransigence on the part of policymakers combined with an inability to form a government will likely continue to impact domestic equity markets, as the main driver remains Central Bank stimulus instead of fiscal reform measures.

With the benchmark Spanish IBEX 35 equity index currently consolidating between a longer-term downtrend and medium-term uptrend, the political situation will prove a major driver behind any future price momentum in the index.

Following the sovereign debt crisis that erupted several years back, Spain has been slow to recover from the damage, with key metrics in the nation remaining under pressure, notably unemployment which has remained elevated in comparison to Euro Area jobless figures.

At 21.00%, unemployment has retreated from 2013 highs of 26.94%, but has remained over 20.00% for over 5 years, underlining the challenges as the government seeks to tackle structural problems that are preventing a stronger recovery in the economy.

While growth has picked up in the region due to highly accommodative monetary policy, lending, which is a major driver of economic expansion and job creation has not shown the same level of upside. When taken in concert with the last government’s focus on austerity, the recovery has not been felt by the majority of Spain’s citizens.

This has contributed to the rising popularity of anti-austerity party Podemos.

The main drag has been the performance of the financial and natural resources sectors.

Thanks to ongoing corruption scandals and a poor scorecard with respect to the economy, the People’s Party which has been a dominant force in politics for decades has seen its influence severely eroded, adding to the chaos dominating the political discourse.

Anti-austerity parties have gained traction as a result, creating an environment where forming a governing coalition has been impractical based on the starkly different viewpoints.  One of the problems with an uncertain political outlook, is the impact on domestic fiscal conditions.

Without a functioning government, fiscal stimulus, which would most directly benefit the economy and help to reduce public debt which has ballooned to 101.00% of GDP, remains impossible to implement. Even with the economy growing at a 3.40% pace on an annualized basis, exceeding the aggregate Euro Area figure, the gains have not translated to upside in equity markets.

Looking at equity performance in particular, aside from the IBEX 35 index trending in bear market territory, constituent performance has been exceptionally disappointing. Over the last year, only 12 of the index’s 35 components have shown positive returns.

The main drag has been the performance of the financial and natural resources sectors.  Banco Popular leads the way for the worst performance amongst all the components, dropping -63.90% over the last 52-weeks.  Not far behind are Caixabank, Bankia, Santander, and BBVA which have all echoed the negative returns in the sector. The reason the financial sector has crumbled is due in large part to the cooling of the property market and reduced interest income, as low interest rates imposed by the European Central Bank reduce returns from lending.  With neither of these factors expected to abate over the near-to-medium term, pressure on IBEX 35 performance is likely to remain intact.

After retreating -34.82% from multi-year highs last reached in January of 2015, the Spanish IBEX officially entered a bear market in August of the same year, continuing to trend lower on a longer-term basis since then.  Looking at the last year, the bear market has remained intact, marked by weak performance after the index fell by -18.81% over the prior 52-weeks.

Currently, the index is trending in a narrowing range defined by a longer-term downtrend and medium-term uptrend.  Key indicators continue to point towards more consolidation and sideways price action ahead of the vote. 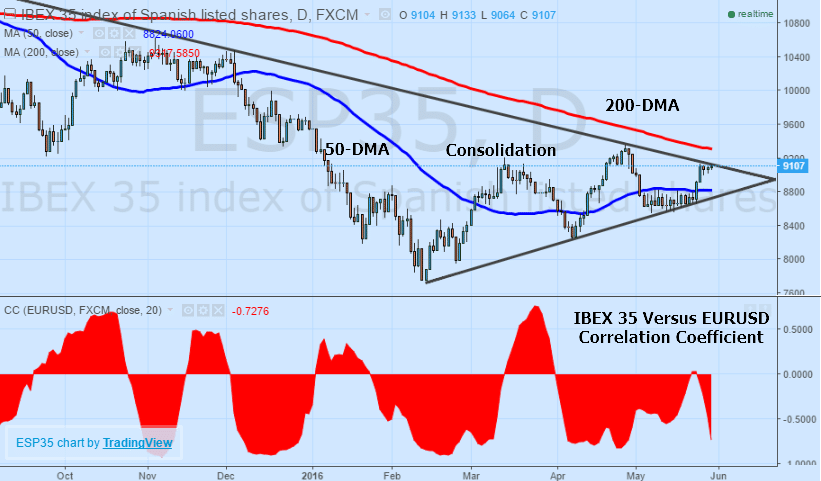 Many of the factors that have weighed heavily on the performance of the IBEX 35 over the last few years are not forecast to dissipate over the near-term as political deadlock prevents accelerated progress in tackling issues like unemployment and the property market.

Until there is more political certainty, the economy is unlikely to follow, leading to a sustained consolidation in Spain’s key equity benchmark.  Consequently, once there is a greater visibility and a directional breakout in the index, establishing a forward-looking position will be notably easier.  In the meantime however, trading the consolidation is not suggested due to the narrowing reward potential and rising risks. 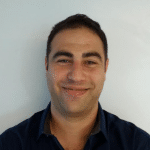