Britain is in a precarious predicament, what with concerns over a hard Brexit or a soft Brexit boiling over. Prime Minister Theresa May has set April as the deadline by which she wishes to invoke Article 50 of the Lisbon Treaty.

This will initiate a 2-year process of extrication from the European Union. Without a framework of sorts in place, British banks and companies, alongside foreign-based corporations, are feeling tremendous anxiety.

In the wake of the Brexit referendum, the UK economy needs a guiding hand, and the British government has pledged to take an active part in it.

PM: My desire to see a country and an economy that works for everyone underpins the Modern #IndustrialStrategy https://t.co/0oXWMl9H7r pic.twitter.com/t5gDlhHx26

Britain Seeks Global Trade Agreements with Asia and the US

British business has been flailing since the shock Brexit referendum on June 23, 2016. The corporate sector and the private sector are looking for a steadying influence to allay their fears. May has been hard at work trying to assuage corporate Britain after grueling speeches on tax dodging and misconduct in the corporate sector. Nonetheless, she is a firm proponent of free markets and a defender of capitalism.

However, her global perspective is limited when it comes to the City of London. Prime Minister May has been entrusted with leading the United Kingdom out of the EU. The Brexit is a contentious issue, but one that MPs have agreed to abide by. If the UK leaves the customs union and the single market, the fate of the City of London remains in doubt.

Prime Minister May wants the City of London to retain its status as the center of economic activity in Europe. At the same time, she wants to seal up Britain’s borders and seek alternative relationships with trading partners elsewhere.

Theresa May will seek a complete break from the EU.

May was unequivocal in her comments about a Brexit: She does not want partial membership of the European Union, will not be half in and half out, and will seek a complete break from the EU. She has reiterated these sentiments on numerous occasions, leading many to believe that this is indeed the new direction of the UK. 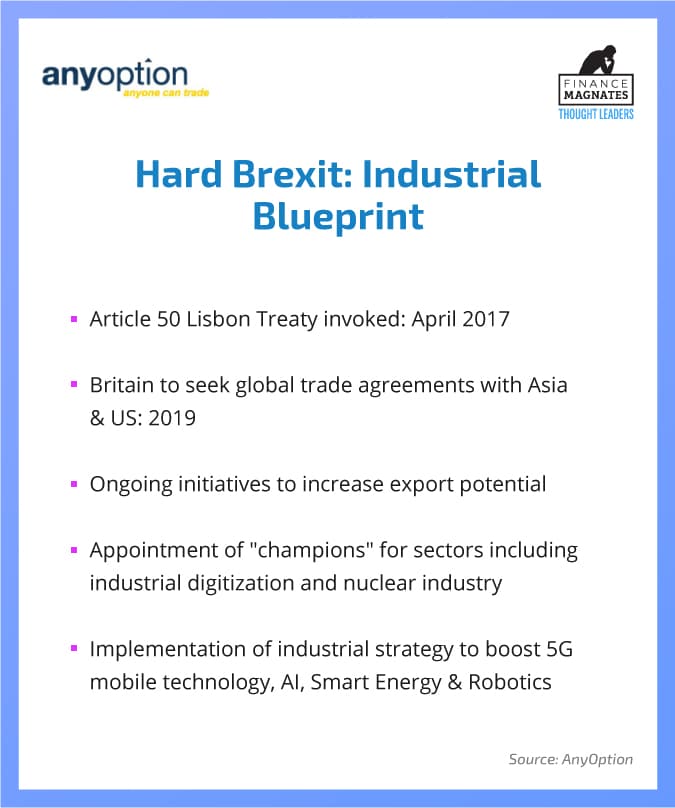 What Future Investment Opportunities Will Be Available in Britain?

Unbeknownst to many, Prime Minister May is in fact a lot more conservative than pundits give her credit for. She campaigned to oppose a Brexit, but her appointment as Prime Minister has been guided by her views on immigration and trade.

There is a perception in Britain that membership of the EU was done for economic reasons alone. On the European continent, the European Union was formed for many reasons, including emotional reasons after the Second World War. Leading analysts believe that Britons may have underestimated the importance of the EU for Europeans.

The Prime Minister is in the process of appointing ‘champions’ for targeted industry sectors.

To quell corporate fears in Britain, the Prime Minister has offered to reduce regulations that prevent growth in exchange for sector-wide trade agreements. Britain is seeking to increase its export potential, especially at a time where the GBP is trading at lower levels against its partners.

To facilitate these changes, the Prime Minister is in the process of appointing ‘champions’ for each of these targeted sectors. These include industrial digitization, the nuclear industry, life-sciences, ultra-low emission vehicles and creative industries.

Britain is behind the 8 ball when it comes to technical education, with China and Singapore leading the pack. The industrial strategy will seek to boost 5G mobile technology, AI, Smart Energy, and robotics.

Share this article
Tags: Brexit / theresa may
Got a news tip? Let Us Know

lET ME SAY THIS IS BRILLIANT MATE!