Bitcoin prices surged higher late last week ahead of the G20 Summit held in Hangzhou amid growing fears that Chinese policymakers will once again devalue the Yuan to maintain economic activity. Now that the Summit has concluded, the major takeaway from the comments of leaders of major world powers was the emphasis on reducing trade protectionism and doing more to offset the weakness of the global economy.

Growing trade restrictions were one of the focal points of the communique that followed the Summit, with China calling for trading partners to reduce trade protectionism while failing to address its own lopsided policies. However, the comments about more tepid growth must be interpreted as a hint that more aggressive measures will be taken to protect vital interests, namely that further devaluation awaits the Yuan which will likely stoke increased Bitcoin buying pressure.

Bitcoin as a Proxy For Outflows

China has been contending with a slowing pace of growth over the last two years as efforts to spur economic activity with a combination of fiscal and monetary stimulus have largely fallen flat of expectations.  With growth tapering to 6.70% on an annualized basis, inflation falling well below target to 1.80%, and bad debts mounting, further accommodation was deemed too risky.

As a result, the most useful tool for maintaining trade has been devaluation of the Yuan to make exports more competitive. The rapid rise in the US dollar over the last two years has hurt efforts to temper strength in the currency, leading officials at the People’s Bank of China to pursue the path of devaluation to maximize the impact of policy.  However, the result has been massive capital outflows and tumbling foreign currency reserves.

Despite the implementation of capital controls that prohibit individuals from moving more than $50,000 out of China annually, the threat of the evaporation of paper wealth has led to many Chinese citizens finding ways to circumvent these measures.

According to Goldman Sachs, nearly $55 billion in outflows were recorded in July, topping the $49 billion estimated for June.  One of the most effective mechanisms for evading those pesky restrictions has been Bitcoin.

Thanks to its unique status and decentralized nature, Bitcoin can be used to move capital all over the planet with almost no oversight.  Generally, renewed interest in Bitcoin comes around the time when the People’s Bank of China is preparing for further Yuan devaluation against the US dollar, meaning that another move to weaken the currency could very well be imminent.

The best hint of this comes from Chinese wealth moving out of the mainland in droves and into trophy assets including real estate and global brands  Bitcoin’s ascent comes at a time when China’s elite is frantically trying to move their paper wealth out of the country.

According to Luo Yu, the son of a former general in the Chinese army, the descendants of influential revolutionaries have been moving money out of China for a significant period of time. He stated, “they don’t believe they will hold on to power long enough – sooner or later they would collapse….so they transfer their money.”

Thanks to its growing adoption in commerce, Bitcoin has become a more pertinent idea for famous princelings trying to avoid the limitations placed on ordinary citizens.  Therefore, should another devaluation occur, Bitcoin prices could surge significantly higher over the near-term. 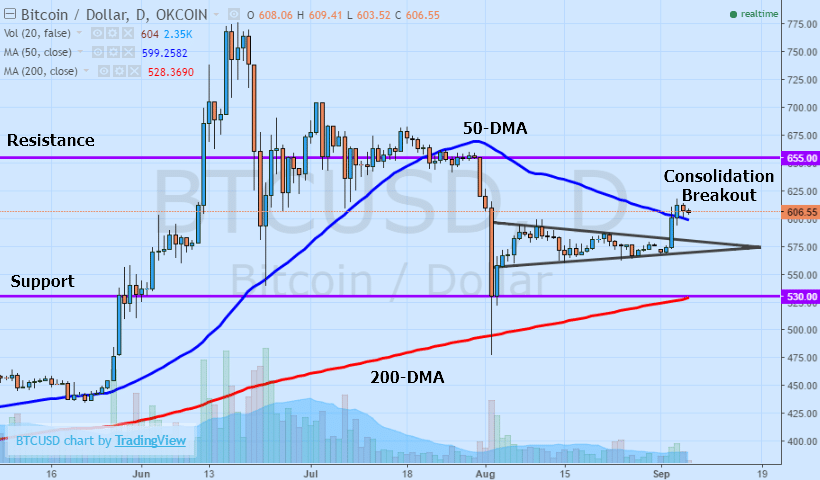 After a significant period of low volumes, Bitcoin denominated in US dollar experienced a massive surge late last week, forcing a breakout from a triangle consolidation and indicating the potential for increased momentum higher near-term.  Although traditionally Bitcoin is highly correlated with uncertainty and risk aversion, equally important is the relationship with the Yuan.

With more certainty in financial markets, the breakout could quickly reverse

The inverse correlation between the Yuan and Bitcoin is slightly weaker than in past months, currently standing at 0.6343, another tumble in the Yuan could very well spell further upside in Bitcoin. Adding to the bullishness in Bitcoin are the moving averages, with the 50-day moving average formerly acting as resistance now acting as support after BTCUSD crossed the level to the upside.

Although no action has been taken yet with respect to the Yuan, should mainland fundamentals like growth, inflation, and trade continue to decline, the PBOC may be forced to act to restore higher levels of economic activity.

At present, the USDCNY pair remains just shy of levels last recorded back in 2010, however, another 5.00-10.00% devaluation is possible. The result might be significant upside in Bitcoin, targeting upside resistance sitting firmly at $655.00.

The risk is that should more certainty come back to financial markets and the global outlook, the breakout could quickly reverse, sending Bitcoin for a retest of $530.00 per coin.

What on top of that interest rates start climbming, retirefunds are crying there mind out, for that , in most on western side of the globe, will the boomers will suck it all the cash back to the bank whit interest rates higher on bonds etc. And will that combine whit what your analyse claim , be the slow but enevitable going down of the bitcoin. Because the way i understand it the low rates situation for the past 8 years or so was defenatly an attraction for those who wanted a little more for there investment, investing in bitcoin.… Read more »