MetaQuotes Software Corp., developer of the most widely used FX trading platforms, today announced it has improved the web-based version of its MetaTrader 5 (MT5) multi-asset trading platform. The company has expanded the platform features to provide traders with the ability to quickly open a demo account at a brokerage company.

Prior to this update, traders were able log in to the MT5 web version provided they have an MQL5 community account, including a demo from any of the multitude of brokers available that are connected to its demo and live accounts servers. But now they can write the broker’s name in the account opening window and after selecting the broker server, they can access the demo account and begin trading, just like on the desktop platform. 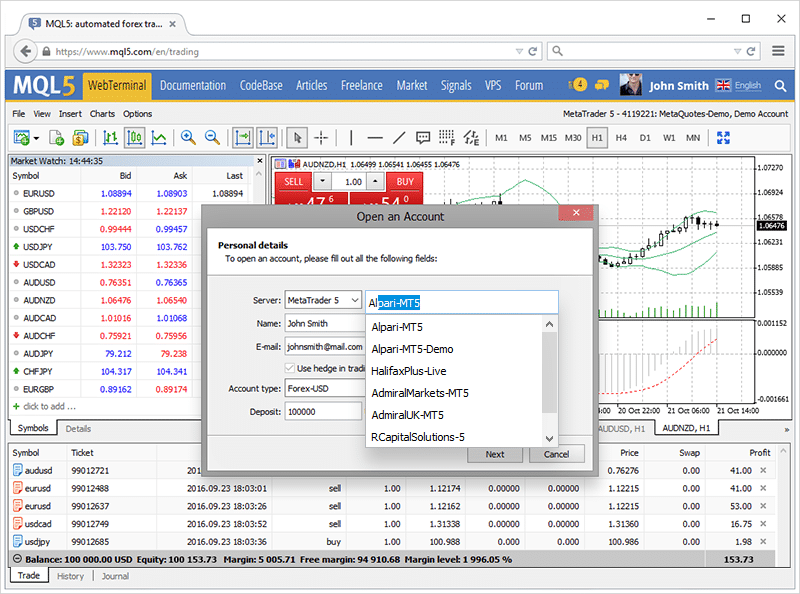 The recent feature is available only on the MQL5.com website and it should boost MetaQuotes efforts to prompt both brokers and traders to switch to MT5 from its predecessor MetaTrader 4.

Just a few weeks after announcing that its MetaTrader 5 Web Platform officially went live in conjunction with its Market Depth Feature, MetaQuotes announced in late September that the multi-asset platform has again expanded its trading features.

Last month’s upgrades included the ability to re-size the web application blocks, including Market Watch and price chart windows. In addition, the application was equipped with a powerful improvement that increased the overall web terminal operation speed due to the code optimization.

MetaTrader 5 web version combines the key advantages of the desktop platform with the convenience of the cross-platform nature of the web terminal. The web platform features netting and hedging systems, 31 technical indicators, 23 analytical objects, one-click-trading and the entire set of trading orders among many other features, excluding autotrading. The program interface has been translated to more than 40 languages making it a truly international platform for web traders around the world.

Share this article
Tags: MT5 Web
Got a news tip? Let Us Know