A number of brokers have continued taking a cautionary approach ahead of next week’s historic Brexit vote that could potentially unleash a dam of volatility across foreign exchange and the financial markets. The latest two providers that are exercising such measures are TickMill and ThinkForex, both of which will see a change in their margin schedules.

The vote itself is slated for June 23, which could have large ramifications not only for EUR and GBP-denominated instruments and currency pairs, but the broader financial market too. As such, many brokers are opting to change their maximum margins and leverage ahead of the vote, preferring to exercise on the safe side rather than incur any woes wrought by an influx of volatility.

As such, beginning on June 19, and extending until June 27, ThinkForex will increase margins on all GBP crosses and the UK stock index to 5%. The general consensus is that the UK will remain a part of the EU. According to Naeem Aslam ThinkForex’s chief market analyst, in a recent statement on the outlook: “Our house view is that there will be no Brexit however, if the polls are correct and Brexit does take place, there may be a heavy punishment for the GBP. We think that Sterling could fall all the way to 1.29 level against the dollar. However, if there is no Brexit, the currency could bounce to 1.60.”

ECN broker Tickmill will be reducing its leverage on all GBP pairs to 1:25, while EUR-denominated pairs will see a cap of 1:100 – finally, the UK100 index will see a revised leverage of 1:20. These changes are scheduled to come into effect on June 20 and will last until June 24, which presumably would cover any potential tsunami of activity.

Both brokers have also left the door open to additional changes as needed, pending an unforeseen or cataclysmic outcome, possibly similar to the level of volatility seen in January 2015 during the Swiss National Banking (SNB) fallout. 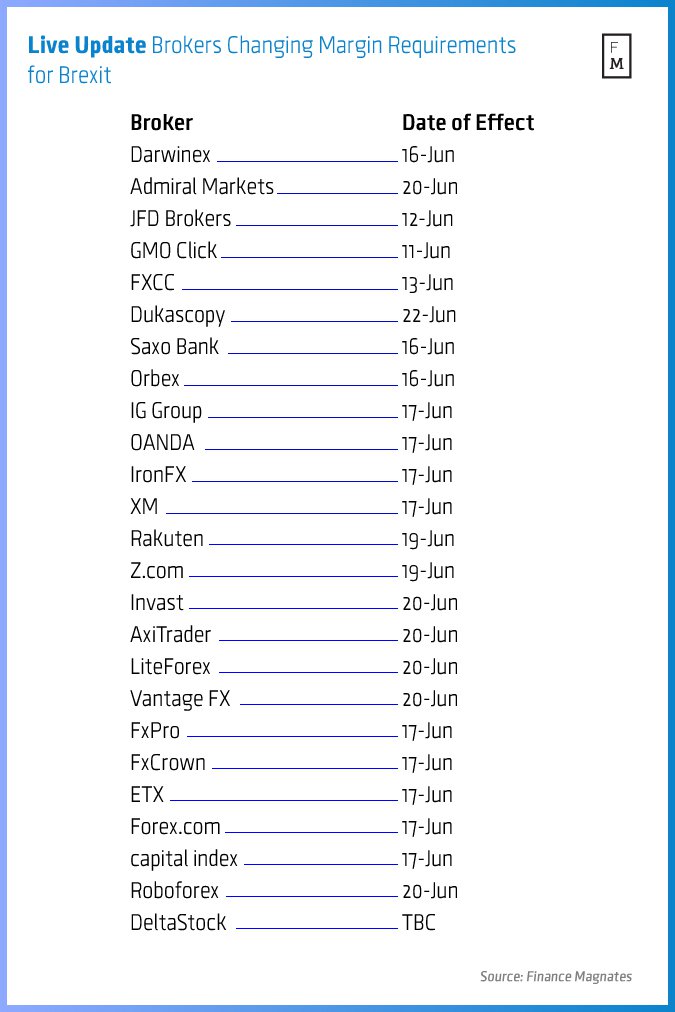