The Israeli branch of Colmex has bought out its rival Matach24 after the latter failed to receive authorization to operate in Israel. This is Colmex’ second acquisition of a fellow Israeli forex broker following its acquisition of Smart Capital last June. Colmex has confirmed to Finance Magnates the details of the deal. Matach24 has been given until January 11th 2017 to shut down all activities except closing positions, closing accounts and the withdrawal of funds by traders.

As many expected, the licensing process has caused the local forex industry to consolidate, as only 6 out of the 21 companies that applied for a license made it the whole way.

Finance Magnates has learned that Matach24 has nearly 1000 active clients which now will be diverted to Colmex together with their deposits. However, the deal still awaits authorization from the Israeli Securities Authority (ISA). Last July Matach24 was on the other side of the equation when it bought iTrader’s clients list following its license application rejection by the ISA.

Colmex was the last forex broker to be licensed by the ISA following the first 5 licensed brokers, which are ATRADE, FXCM Israel, REAL FOREX, FIRST INDEX and Plus500.

One more Israeli trading firm is still in limbo (PROTRADE), operating as before while waiting for the final decision of the ISA. Any operator offering retail margin trading in Israel that is not licensed or has a license application pending is now breaking the law.

The process was very selective and drawn out. From the moment Israeli lawmakers gave the ISA the mandate to regulate this market, 21 firms applied for its licence. The regulators rejected the applications of seven firms and six more withdrew their applications themselves. It also led to consolidation in the Israeli market as we saw the remaining firms taking over market share from the leaving firms or taking them over outright as in the case of Colmex buying out Smart Capital and now Matach24. 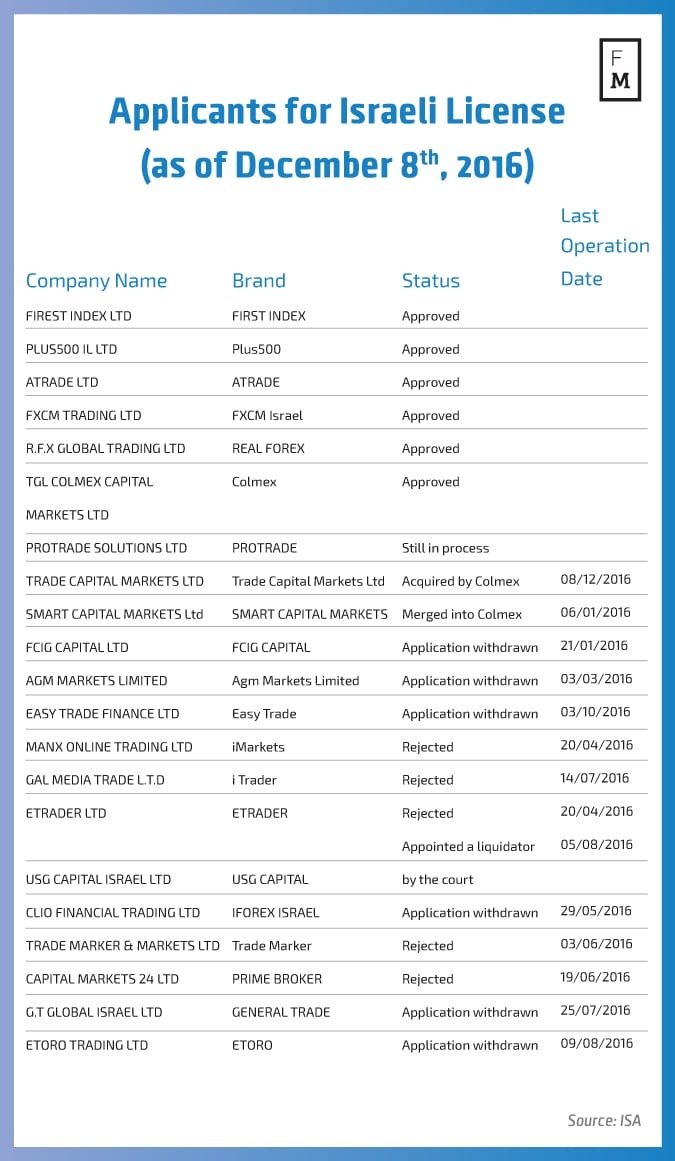