IG Group Holdings Plc today announced its results for the year ended 31 May 2016 revealing a year of strong growth for the company in revenue and profit, with both hitting new highs.

The strong financial results were driven primarily by the improved performance from the company’s digital and mobile marketing efforts in its more established markets, supported by reasonably volatile financial markets and its investments in Switzerland, Dubai and Nadex which have begun to produce returns.

The brokerage has announced that its profits before taxes increased by 7.6 percent to £207.9 million when compared to last year’s figures of £193.2 million.

Looking at the trading revenue of IG Group, this was up 14% year-on-year at £456.3 million, reflecting an increase of 14 percent over last year’s figures of £400.2 million.

Earnings per share (EPS) were up 8.5 percent at 44.58 pence while IG Group generated £197.9 million of its own funds from operation. 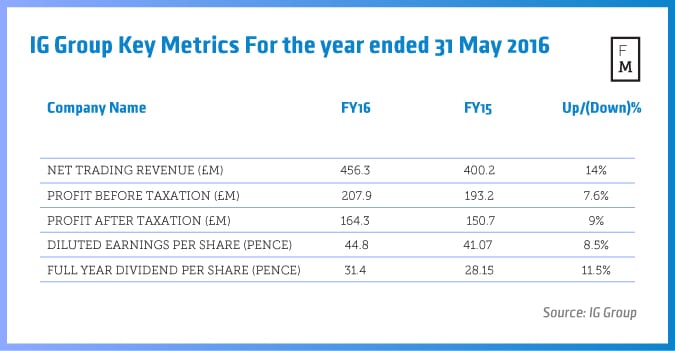 Finally, IG Group highlighted the increase in new client numbers, defined as first trades, which were ahead of the previous year’s figures by 29% with Switzerland and Dubai offices performing ahead of expectations.

Peter Hetherington, Chief Executive Officer, commented: “We made good progress in 2016, strategically, operationally and financially, and the business starts this year in good shape. I am delighted to be leading such an energised team, and we remain confident that we can deliver further attractive growth going forward.”

Share this article
Tags: financial-results
Got a news tip? Let Us Know