The US economy grew at an annualised rate of 1.4% during Q2 2016. This bested the consensus estimate of 1.1% and is sharply higher than the 0.8% for the first quarter of the year. The upward revision to 1.4% represents the strongest growth rate for the US economy in 3 quarters.

Big drivers of GDP growth are personal consumption expenditure, durable goods spending, services and non-durable goods. On the flipside, growth was stifled by private inventories (-1.16%) with businesses losing $9.5 billion in inventories, as opposed to $12.4 billion during the second estimate. This marks the first time in 5 years that inventory levels have fallen.

The International Monetary Fund (IMF) scrutinized this data, and is of the opinion that the overall growth for the US economy in 2016 will be 1.6%. This is sharply lower than the 2.6% forecast from 2015. In July 2016, the IMF was expecting growth of 2.2%, but current realities are dragging growth forecasts lower.

Why is the IMF so Bearish on Advanced Economies? 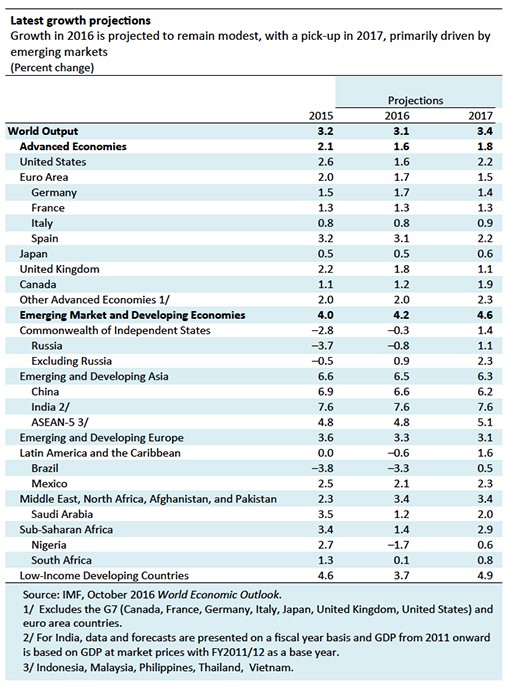 Slow Q2 growth is driving current economic projections for the US economy.

This was presented in the World Economic Outlook (WEO) report. According to the IMF, it is weak business investment and sharply lower inventories levels that are contributing to the revised forecasts. However, as we move into 2017, the IMF is upping the ante with growth projections of 2.2% on the back of fading energy prices and USD strength.

What About Major Trading Partners of the US? 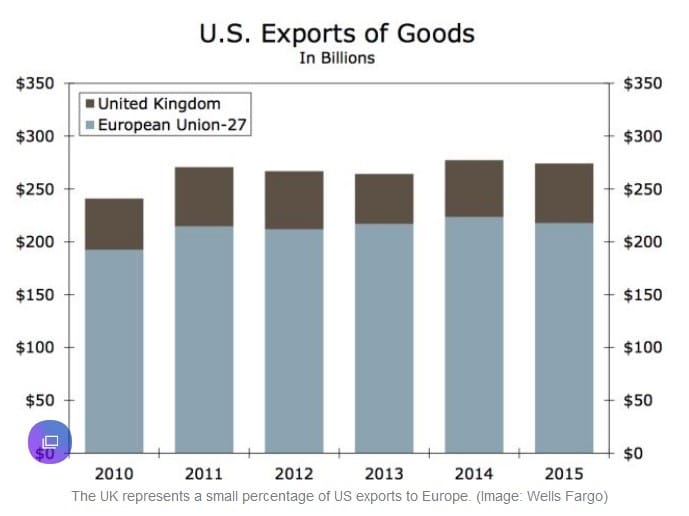 The June 23 Brexit referendum had the potential to devastate the UK and European economies. That a financial crisis was nipped in the bud by swift action was a credit to erstwhile Prime Minister David Cameron and BOE Governor Mark Carney. Expanded QE, a 25-basis point rate cut and the swearing-in of Prime Minister Theresa May have greatly assisted the UK economy in avoiding a financial meltdown.

Nonetheless, the IMF believes that investor confidence will be hit hard by Britain’s decision to break from the EU. UK economic growth is forecast to increase at just 1.8% in 2016 and 1.1% in 2017. For its part, the eurozone is likely to grow by 1.7% in 2016 and 1.5% in 2017. These figures are sharp downward revisions from the 2015 forecasts. The IMF believes that the ECB (European Central Bank) should put in place an expanded asset purchases program with an accommodative stance. Further afield in Asia, the world’s #3 largest economy – Japan – is expected to grow at 0.5% in 2016 and just 0.6% in 2017.

US Personal consumption is strong, but business spending is weak…

Overall, it is clear that growth projections for developed countries have been revised sharply lower. This is the confluence of multiple events, including declining consumer sentiment, plunging commodity prices, weak demand, low inventory levels, deflation, weaker manufacturing data, and more. Major events like the Brexit have yet to impact on global growth, but already fears are coalescing and speculative sentiment is bearish. Prime Minister Theresa May is currently in the midst of setting a timetable for a Brexit in 2017.

This is driving GBP weakness to a 31-year low, while the FTSE 100 index races above 7,000 points. Further afield, EM economies are witnessing strong growth. Growth forecasts are at 4.2%, higher than the 4.1% that was forecast in July. 2017 growth is forecast at 4.6%. From a US perspective however, the main concern remains the lacklustre performance in Q2 2016. While personal consumption numbers remain high, it is the business side that remains problematic. This is the third consecutive quarter of investment spending declines.

How Are Average American Families Faring with the National Debt?

With the US presidential elections now just five weeks away, discussions about the National Debt are resurfacing. According to the numbers, average American families are heavily indebted, and this will only increase moving forward:

Overall, the current investment climate in the US is moderately bullish. We can expect a rate hike by December 14, 2016, and this will certainly benefit banking and financial stocks. However, exports will be impacted to a degree. It should be borne in mind that the anticipation of rate hikes or other monetary policy measures are typically factored into the market well ahead of time. The net effect is usually muted.