Gold had a disastrous start to October, as prices plunged to fresh four-month lows on a surging US dollar. Although the dollar’s strength hasn’t let up, bullion appears to have found its bottom.

Gold for December delivery, the most actively traded futures contract, settled at a two-week high of $1,269.90 per troy ounce on Wednesday. That represents a gain of about 1.4% from the four-month low on October 7. Bullion would string together three consecutive daily gains before edging slightly lower on Thursday. As of Friday morning, December gold was trading at $1,265.70, or just below the 200-day simple moving average.

Relative strength, while very low, has rebounded from severe overbought levels earlier this month. The sharp deceleration in the MACD has also eased.

Bullion’s bloodbath began one month ago as the Federal Open Market Committee (FOMC) wrapped up its two-day policy meeting in Washington. While no change in monetary policy materialized at the meeting, three policymakers voted in favour of raising interest rates.

They were Boston Fed Bank President Eric Rosengren, Kansas City President Esther George and Loretta Mester of Cleveland. In the eyes of traders, that all but means the Fed will raise interest rates shortly. Current Fed Fund futures prices imply a nearly 75% chance of liftoff at the final meeting of the year in December.

Rate-hike bets fueled massive gains in the US dollar, which pressured greenback-denominated commodities. As non-yielding assets, gold and silver are especially vulnerable to rising US interest rates. Their decline in October was directly correlated with fresh seven-month highs for the US dollar, which tracks the greenback against a basket of other major currencies. 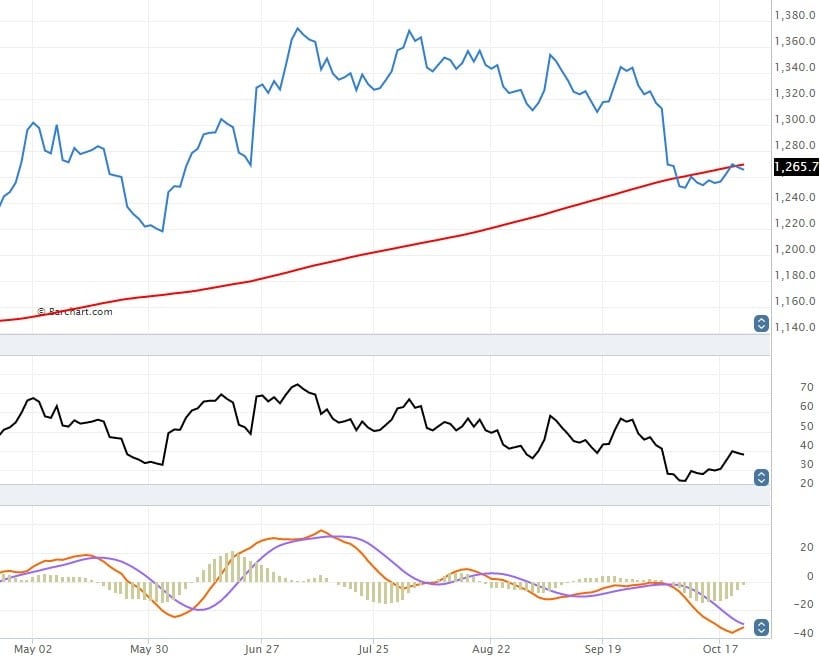 After a weeklong pause, the dollar continued its uptrend Thursday, reaching even higher highs than before. The dollar index closed at 98.31 on Thursday, the highest since March 1. But this time, the dollar’s surge wasn’t associated with a large decline in gold and silver, as both metals held relatively steady. This suggests that the market may have already priced in a December rate hike.

However, this doesn’t mean investors are bullish on gold. Quite the opposite, as a matter of fact. With interest rate set to rise, it may be a while still before the yellow metal regains momentum.

Aside from US monetary policy bearing down, gold’s massive bull run this year was also due for a correction. Prior to the latest downturn, gold futures were up around 30% on the year. As of October 21, gold prices were still up nearly 20% for 2016.

Monetary policy and the US presidential election will continue to impact gold’s short-term price horizon. The Fed will hold its next FOMC meeting mere days before the November 8 election. Latest polls suggest that Democratic nominee Hillary Clinton has widened her lead over GOP candidate Donald Trump. Both candidates just wrapped up their third and final presidential debate.

Seriously, RSI and MACD indicators…..Please…. What are we, first year learners??
Take a look at the RSI for EUR/USD. Its been ‘Over sold’ since its fall from 1.40 to 1.09.
MACD is little more than an alternative visualization.
Any serious trader knows these oscillating and overbought/oversold indicators continuously provide false signals.
Price Action is King.