Since June 1, gold prices have soared over $70 or 6% to $1,285.00 a troy ounce, the highest level in five weeks. The increase also confirmed a bullish reversal for the yellow metal, according to the short-term momentum indicators.

Gold’s next major resistance hurdle is located above the psychological $1,300 level. The yellow metal last traded above that level in August 2015. After several failed attempts through the first five months of 2016, the metal appears poised for another re-test of $1,300. 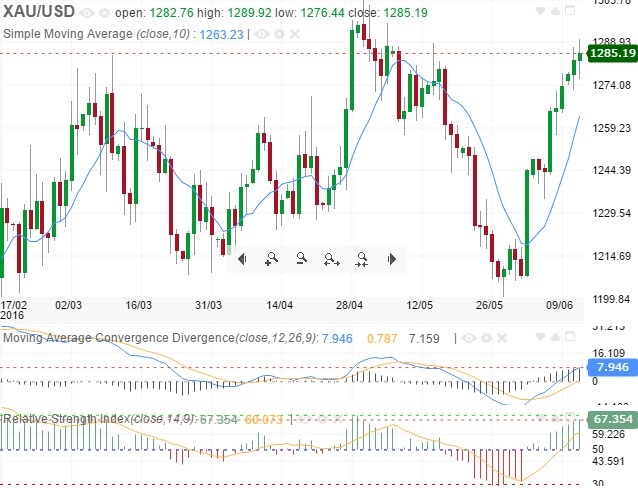 The precious metals rally has not been limited to gold. Silver futures have spiked 9% since the beginning of June, reflecting the growing investment appeal of the grey metal, which benefits from industrial as well as investment demand.

Much of the recent advance in gold and silver has been tied to anxieties about the Brexit vote. Markets are in disarray at the moment, as investors speculate about the economic and political consequences of Britain quitting the EU. British assets have been hit especially hard. London’s FTSE 100 Index is trading at its lowest level since February, while the pound has slumped to fresh two-month lows against the US dollar.

According to a separate YouGov poll for The Times, the Leave camp holds 46% of the popular vote, compared with 39% who support British Prime Minister David Cameron’s Remain camp.

Britain’s referendum on European Union membership will be held on June 23. Nobody knows exactly what a Leave vote could entail for the British economy or global financial markets, but investors can expect waves of turmoil leading up to that date. A Leave vote on June 23 could propel gold and other precious metals to multi-year highs, as investors seek a hedge against global volatility.

In the short-term, gold’s biggest obstacle continues to be the US dollar. Since the NFP meltdown on June 3, the dollar has rebounded 1% against a basket of global currencies. However, with the Federal Reserve unlikely to raise interest rates this summer, the dollar’s gains are likely to be limited absent any unexpected market catalysts.

Those catalysts are unlikely to present themselves before the June nonfarm payrolls report, which will be released July 8. US job creation slowed to a dismal 38,000 in May, the Labor Department reported earlier this month. This shocking low figure raised doubts about the health of the US economy, pushing the dollar to monthly lows and supporting a short-term spike in gold and silver prices. This suggests that the inverse relationship between the US dollar and gold is likely to continue for the foreseeable future.

Thank you for this article. However, I’ve just read a very compelling case by a prominent UK finance authority, i.e. the academic director of master of finance at Cambridge Business School. There a lot of useful points but the #1 is ‘The UK will be permanently less prosperous’.