Ah, the joys of trading forex. One man, not a major international figure mind you, just a mayor, makes a public statement, and twenty-eight billion pounds change hands.

On Sunday afternoon Boris Johnson, mayor of London, publicly stated that he would back the campaign for the UK to leave the European Union. On Sunday evening the pound opened 130 pips down relative to the dollar. As of this writing it has lost three cents. That is a little over two percent of its value. The GBP M1 money supply currently stands at about £1.46 trillion. On Friday that sum was worth $2.1 trillion. Now it is worth about $2.05 trillion and losing steadily.

What it Means for You

How does this affect you? It depends who you are and what your options are when it comes to shifting your liabilities. If you are a forex trader, you have already smelled the blood and you see an opportunity. If you are a UK exporter, your products just got two percent cheaper. If you are David Cameron, you likely had trouble digesting your bacon sandwich on Monday morning.

But before I go any further, I would like to clarify a few points. Having read a number of articles about an impending Grexit last year, I was somewhat surprised to discover how poorly the authors grasped the core issues. These were not pyjama bloggers, but professional journalists writing for major news outlets who failed to understand the difference between membership in the euro and membership in the European Union, for example. This suggests to me that the general public may not have as firm a handle on all of the issues as one might expect, so if you will bear with me, I will attempt to explain them briefly.

The European Union began in 1957 as a free trade zone known as the European Economic Community. It has since morphed into a supranational government with its own currency, central bank, president and parliament.

That said, the parliament has no legal power and all decisions are ultimately made by a commission of unelected members. Member states are required to keep their legislation in harmony with that of the EU. This gives the commission de facto authority over national parliaments.

Some but not all of the member states have adopted the euro as their national currency. This has the advantage of protecting them from currency fluctuations which facilitates cross-border trade. It has the disadvantage of sacrificing a little more of their sovereignty since they cannot issue their own currency, control their monetary base or adjust their interest rates.

The United Kingdom is a member of the European Union, but not of the euro. It still has its own currency, the pound. There will be a referendum on 23 June of this year when the British people will vote whether to remain part of the EU or to leave. The prospect of the UK leaving the EU is sometimes referred to as a Brexit, a contraction of BRitain and EXit.

This would return its status to that of an independent state with no political ties to the EU.

Brexit and the Currency Markets

So why is the forex market reacting as it is to a potential Brexit? What we see here is irrational fear. It is irrational because it is based in two unwarranted assumptions.

The first assumption is that Boris Johnson’s decision to back the Leave campaign will influence the outcome of the referendum. This is not a certainty.

But if the UK leaving is so bad for the EU, why didn’t the euro tank on the news? And if the pound tanked as badly as it did, where is the evidence that a Brexit would be worse for the UK than it would be for the EU? Changes to the value of the pound since Sunday suggest that the underlying assumption is that if there is a Brexit it will be very bad for the UK but not all that bad for the EU. In this article I intend to challenge that assumption and then examine what the implications may be for the pound.

What Is at Stake?

Let’s take a closer look at what is at stake for the UK.

EU membership currently costs the UK taxpayer about £20 billion per year. Given that the UK national budget for 2016 is in the neighbourhood of £760 billion, £20 billion is not a cheese sandwich. It is in fact 2.6% of total government expenditure.

What value does the UK taxpayer get in return? The most obvious value is open access to markets across the EU. Yet when you consider that access to these markets could and would be easily achieved with a handful of bilateral trade agreements, it becomes easier to understand why some people think the UK would be better off on its own. Beyond that, there is a nebulous notion of strength in unity, but this is difficult to quantify, and even more difficult to weigh against the corresponding loss of autonomy. As far as military considerations go, the UK is a major military power in its own right, and a member of NATO. EU membership does not affect either.

Now let’s take a look at what is at stake for the EU. There is a legitimate fear that if one major country leaves the union, others may follow. Even if they don’t, the credibility and political clout of the EU would be forever damaged.

Many political careers have been built on the European project. For these politicians it is a vehicle to accumulate and concentrate power without any accountability to annoying voters. Naturally they are not keen to see it come apart. But what about the rest of us?

Given that multiple bilateral trade agreements would be in place with the UK before the exit actually occurred, member states would not lose any business with the UK. Since the UK is not part of the euro zone, exchange rates would not be an issue. So it is difficult to establish what economic cost there would be to the EU, other than the £20 billion contributed annually by the UK. Even so, much of that cost comes from health and social benefits to immigrants from other member states, rather than direct payments to Brussels.

In short, the economic impact to the UK would likely be positive, and the cost to the EU would be more political than social or economic. 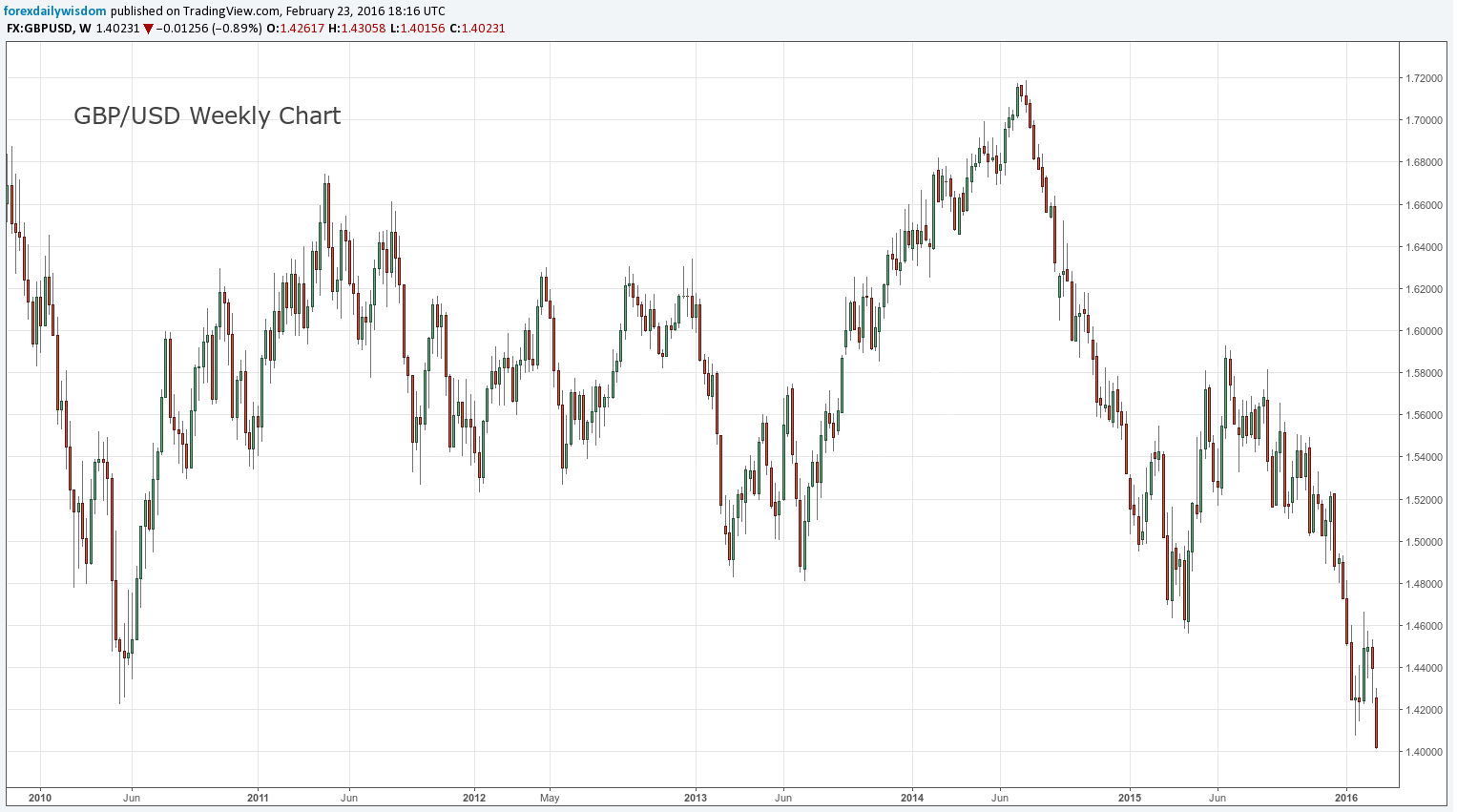 The pound was in a downward trend well before Boris Johnson made his announcement.

The pound has been losing value in relation to other majors for some time now. I expect this trend to continue in the near term, irrespective of Boris, David, Mario, Christine or any of the global elites whose whims determine our fate. The GBP snowball was gently rolling down the slope when Boris gave it a tap with his toe.

The world will not come to an end either way. Proponents of a Brexit are not xenophobic monsters bent on committing economic suicide. There are issues of epic proportion facing western democracies today. A Brexit is not one of them.